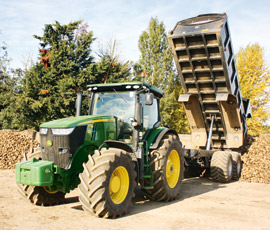 Shifting beet, potatoes or maize in wet conditions is rarely easy. But one Lincolnshire trailer maker believes he could have the answer, as David Cousins explains

You may not be able to do much about appalling weather of the sort that characterised the winter of 2012-2013, but a properly-designed trailer can keep you moving when others are slipping and sliding about like novice ice-skaters.

That’s the view of Bostond trailer maker Richard Larrington. His company makes more than 250 big-capacity trailers a year and ships 40% of them to other countries, so he should know a bit about the subject.

Last year’s wet conditions, the worst for 50 years, made life difficult for almost all UK farmers. But, he points out, it was those with potatoes, sugar beet, carrots and maize that had the toughest time.

Harvesters, which are generally fitted with super-wide tyres or tracks, were often able to keep going, but the tractors and trailers hauling the crop off the field fared much less well. As the trailer tyres sank into the ground, the drag on the sidewalls increased and even big tractors struggled to pull them along.

It’s a scenario that farmers dread seeing repeated, especially as the acreage of winter-harvested maize and sugar beet (often for AD plants) has increased in recent years. But Mr Larrington was determined to design a trailer that can cope with wet conditions, a task that became more urgent when Ely contractors PJ Lee asked him to come up with a trailer that could keep moving even in the worst of conditions

Instead of the blocky tread pattern on most trailer tyres, which immediately fills with mud, he used a cleated tread with 18mm deep lugs. This configuration stops the soil building up, he says, since it simply falls off the tyre. 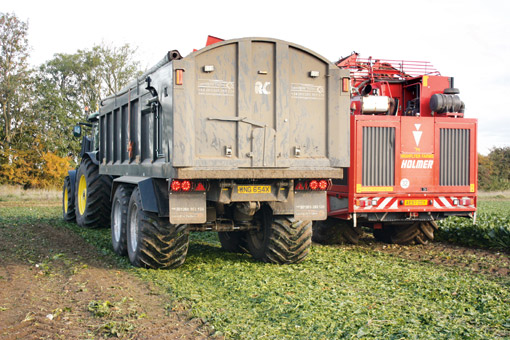 The new trailer has had its body widened and lowered to maintain its 20t capacity while being able to get under harvesters’ elevators. The twin axles are set 1.8m apart (most trailers measure 1.3m between axles) which means they are rated for 10t per axle.

A rear steering axle minimises scrubbing and, with a dab on the relevant spool valve, locks itself in the straight-ahead position as you reverse up to the heap. As the trailer begins its 60deg tip, the air suspension automatically lowers the body by 150mm to stabilise it.

Air suspension and 3t max pressure on the drawbar keep the commercial-spec trailer within current and future regulations. LED lights are plentiful, including two indicators and lights at the top of the tailgate that can be seen by those impatient drivers two behind you who would otherwise try to overtake.

The high level of spec involved isn’t just to keep the trailer moving in difficult conditions, says Mr Larrington. Stopping the tyres from sinking into the ground means there are no ruts to have to fill in and – crucially – you’re not carting soil on the road. You’ll cut fuel consumption too, he adds, and need 80-90hp less power to haul the trailer.

For many people, though, the most important aspect of this trailer is its fully commercial spec. This will become more important when the new trailer rules come in, says Mr Larrington.

At the moment, the combined weight of tractor and trailer is limited to just 24,360kg. However new rules coming in from 2014 are expected to allow tractors with fully commercial trailers like this one to carry 33t. Trailers like this don’t come cheap, admits Mr Larrington, but this 20t £30,000 trailer should last 20 years. “And you’ll get the job done, whatever the conditions,” he says. Given the unpredictability of the UK climate, he thinks it’s weather and ground protection that many farmers are looking for.