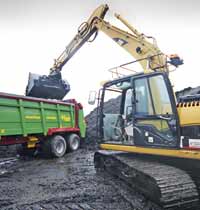 Compost spreading is set to become a big business for Berwick-upon-Tweed farmer and contractor Philip Wilson – he plans to spread more than 90,000t of it on some 9000 acres in the coming months.

More particularly, he aims to “precision spread” it on growing crops so that the exact amount of nutrient being put on is known and allowance can then be made in the rate of inorganic fertiliser applied as a later dressing.

The business was started in the autumn of last year when Mr Wilson took on a contract to spread compost produced by a company in Tyneside. “It’s made from green waste brought in from municipal and private sites,” he says. “It is composted and then it has to be found a home, which is where I come in with the spreading business.”

The main tool of the trade is an 18t Strautmann VS1803 rear discharge spreader extended to hold 20t. “The spread width is 12m so I can handle 24m tramlines without having to stray off-road,” he says.

Last autumn saw the Strautmann kept busy spreading compost, first on stubbles and then on growing crops. The compost is delivered by lorry, then Mr Wilson arrives with his spreader and 13t Caterpillar 360deg digger.

“I reckon to take about eight minutes to load the spreader so that, in total, there is usually a 15-minute turnaround time which means I’m spreading four loads an hour,” he explains. “In a good day I would reckon to spread over 600t.”

Spreading compost is not as straightforward as turning up at a farm to spread a pile of FYM. The field has to be soil sampled and the results sent to the Environment Agency who, after three weeks, will usually give their consent to it being treated. 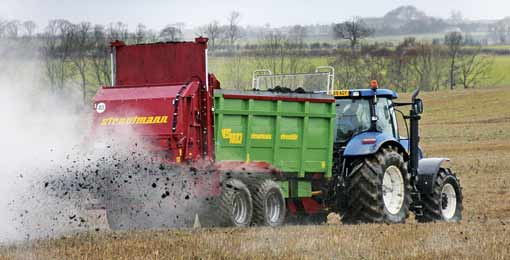 “Compost is a pretty powerful slow-release fertiliser with 1t of moist compost providing about 10kg of N, 2kg of P and 7kg of K plus magnesium and sulphur,” he says.

The bag fertiliser replacement value of compost at today’s prices is about £9.50/t and can make it an attractive alternative for growers.

Until now, Mr Wilson has been applying a fixed rate of 25t/ha on cereals and 12t/ha on grassland. But he is convinced the future of his business lies with being able to provide a variable rate application system to cater for those who need differing application rates in specific areas of a field.

So he has now retrofitted a set of eight Griffith Elder weigh cells to the spreader. “The weight information is sent to a controller unit which, with GPS information, forward speed and required application rate, will automatically increase or slow down the speed of the bed chains to change application rate.”

Even where variable application rate is not required, the system will provide evidence of accurate application in terms of t/ha and precise area of the field – useful when it comes to invoicing the customer.

The compost is provided free of charge and the cost of soil sampling is borne by the company which provides the compost, he explains. However, the farmer has to pay a £500 registration fee to the Environment Agency, which allows him to have up to 1200t of compost spread on his land – subject to the required consent.

Transport costs, which range from £3.50/t to £8/t, are also paid by the farmer. The spreading fee charged by Mr Wilson is about £3/t when the heap of compost is in the field but rises if more travelling is required. Typically, a farmer having 1000t spread is likely to be spending in the region of £7/t – 50p/t registration, £3.50/t transport and £3/t spreading. .