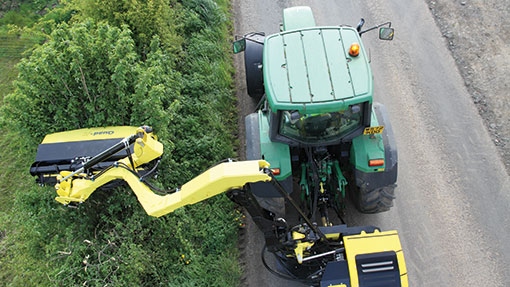 In the latest in his series on British machinery manufacturers, Michael Williams talks to Blaney Agri

Sean Blaney was a student taking an engineering degree when he started his own business and now, 21 years later, his farm machinery companies employ 40 people and sell equipment throughout the UK and a growing list of export markets.

The university course offered a good start to Sean’s business career. Besides gaining his engineering qualification, part of his student loan was used to help buy equipment needed to set up his business which was, and still is, based on his father’s farm at Ahoghill, Co Antrim, Northern Ireland.

Sean’s first business was servicing and repairing ATVs and utility vehicles for local farmers. As the business expanded Sean realised there could be opportunities to make special equipment to work with ATVs, and that started his manufacturing business. It is called Quad-X and has grown to become one of the leading manufacturers of this type of equipment for farming, estate management and the equestrian market.

The success of the Quad-X machines brought suggestions that Sean should develop bigger machines powered by tractors, and the result is a separate company called Blaney Agri Solutions.

“I am always interested in ways to do things differently, and designing and building machinery for tractors offers more scope because of the extra power and also because of the different technologies that can be used such as electronics and hydraulics,” he explains. “Some of our tractor equipment is based on machines in the Quad-X range, but we have also added different machines including a tractor-mounted hedgecutter range introduced last year.”

Sean is the chief engineer and driving force behind nearly all the new product development for both companies, and the rapid growth of the Blaney Agri range and his innovative approach to designing the machines are impressive.

Since the first tractor machines arrived about 11 years ago the range has grown to include pasture toppers, aerators, a self-loading bale shredder, straw choppers, swathers, weed wipers, trailers, a silage bale unroller, bedding machines, a log splitter plus the hedgecutters with features such as telescopic arm extension and parallel arm geometry.

He still has plenty of new machinery ideas for the future, but development work has to fit in with running the business. Being based on the Blaney family farm is handy for field-testing new products, but it also means Sean is available to lend a hand at peak times for jobs such as lambing or silage making. He also has other businesses making components such as gearboxes for his machines and for other manufacturers.

As well as developing new machines, priorities for the future include continuing to expand the dealer network in the UK and in Ireland, his principle markets. Products from both companies are also well established on the continent, and Sean is keen to develop additional overseas markets.

Backed by what he describes as “a dedicated and hard working production team”, Sean has already built one of the fastest-growing farm machinery manufacturing businesses in the UK, but he is still full of ideas for the future and often his biggest dilemma, he says, is choosing which project to focus on next.