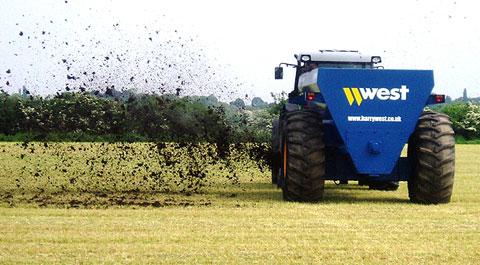 Although most of the machines now made by Harry West are designed for livestock farms, it was roll bars for tractors that provided the company’s first big success.

Harry West was running a machinery repair service and fabricating small pieces of equipment in the 1960s when tractor roll bars became a serious issue.

Research had shown that accidents involving tractors without rollover protection exposed drivers to the risk of injury or death. This encouraged many farmers to fit roll bars voluntarily before legislation enforced their use on new tractors in 1970.

As the market for roll bars for existing tractors expanded, Harry West began building them in 1966, extending his workshop and employing more staff to cope with the demand. More than 18,000 were made.

He had already diversified into making the Hi-Feeder silage feeder when safety cabs took over from roll bars, and silage and grain trailers had also become important West products.

The Dual Spreader (designed by a Cheshire farmer) joined the West range in 1979. It was the first machine with a rotary impeller for spreading a wide range of manures and gained a reputation for reliability. Dual Spreaders are still available in four sizes including a range-topping 12.5cu m model.

UK-built products account for over 90% of company turnover. They also include rear delivery spreaders with hydraulic drive to the bed chains plus West Diet Feeders in 12 and 16cu m sizes. The firm also imports Seko diet feeders and green waste composting equipment.

As well as selling machines, the Harry West also supplies and erects steel-framed buildings and operates a rental scheme offering its machines on a hire basis. Sales manager Jeff Auton says hiring is proving to be a popular option for some farmers.

“Most West machines are used on a seasonal basis and hiring allows farmers to use them without the cost of ownership. The limiting factor is delivery and collection costs, which is why farms using our hire scheme are usually less than 100 miles from the factory,” he said.

Plans include a 12,000-litre (2600gal) Dual Spreader, currently at the design stage. A new diet feeder is also in the pipeline and will be available in 12 and 16cu m sizes with a 20cu m version to follow.

The design will allow feeding over a 5ft barrier and uses a planetary gearbox and hydraulic drive to the feed-out rotor.

Mr Auton says they also see scope to expand their export sales, particularly to other EU countries, where West equipment is not well known.

Owned by: The West family. Harry West is the chairman