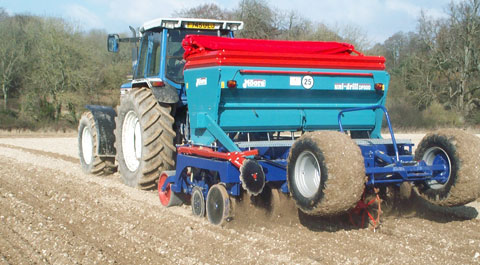 The Moore Uni-Drill story dates back to the earliest stages of direct drilling development in Britain when the Plant Protection division of ICI introduced zero tillage based on their new herbicide, Gramoxone.

Gramoxone was available in the 1960s, but it was obvious that its use would require special drills that would sow seed into undisturbed ground where the herbicide had been sprayed. Plant Protection co-operated closely with several machinery companies that were interested in developing direct drilling equipment and one of these was Massey Ferguson where Sam Moore, a farmer’s son from Northern Ireland, worked in the engineering department.

Sam realised that the new direct drilling technique could have a big potential and he returned to the family farm at Ballymoney in Co Antrim to start his own drill development programme. His ideas worked well and in 1974 he formed a company based in Ballymoney to produce and market the new Moore Uni-Drill.

Being brought up in Co Antrim, considered to be one of the UK’s best grass growing areas, it is not surprising that Sam Moore decided to design his first Uni-Drill to work in pasture. This was followed in the late 1970s by a special arable version, and he added a sports turf model to the Uni-Drill range in about 1985. It was a period of rapid growth for the company, with drill production expanding in Northern Ireland to meet increased demand in the UK and in export markets, and Uni-Drills were also produced under licensing agreements overseas, particularly in the United States.

As the company expanded, Sam Moore’s son, Sam junior, joined the business and has been running Moore Uni-Drill since his father retired in 1996. Recent developments include an agreement in 2009 to transfer production of the arable Uni-Drills from Northern Ireland to the Sumo UK factory in Yorkshire. The result was rebranded as the Sumo Moore Uni-Drill product range including the Versadrill and the recently relaunched low draft classic Uni-Drill which is suitable for zero tillage or working in a conventional seedbed.

The Uni-Drill company still operates from Ballymoney where the marketing, spare parts and technical support operations are based, and this is also where the grassland Uni-Drills are still built. The chassis for the grass drills are made by outside suppliers on a sub-contract basis, but the final assembly work is completed by a small team employed by the company. A new version of the grassland Uni-Drill introduced in 2011 has a 3m working width and drills 32 rows with the spacing reduced to 90mm or one-third less than the previous model. Sports turf Uni-Drills are also built in Northern Ireland, including a recently introduced 2.0m model with 70mm row intervals.

Other Moore company business activities include distributing Horsch equipment in Northern Ireland and they are also the Sumo machinery distributor for Ireland. Meanwhile Sam Moore senior is enjoying his retirement but still takes a keen interest in the company he started, and the family continues to run the 60ha farm where the first Uni-Drill was developed.

More from our Best of British series.