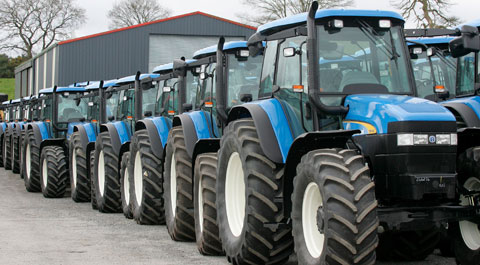 Many of the companies that made Britain’s tractor industry a world leader are no longer here, but the success story continues at the New Holland tractor plant in Essex.

Britain was for many years the largest tractor exporter and pioneered some of the biggest advances in tractor technology, but most of the factories contributing to that success have stopped making tractors due to company mergers and takeovers or because production has been transferred overseas.

The New Holland plant in Basildon is an exception. It has built tractors since 1964, when it was opened by Ford, replacing the factory a few miles away in Dagenham, where Ford had built tractors since 1932. The Basildon factory is part of CNH, the agricultural and construction equipment business formed in 1999 and now part of the Italian-owned Fiat Industrial group.

The principle brand names of CNH are Case IH and New Holland, which joined forces following a series of mergers and takeovers. Although Basildon builds some Case IH tractors, current production is dominated by the New Holland brand, with about 13,000 tractors built last year. Basildon’s New Holland models are all in the 101 to 270hp sector, covering the top-selling power range in most of Europe, including the UK, and the factory builds about 65% of New Holland tractors sold in Britain, with the balance consisting of high horsepower T8 and T9 models from New Holland factories in the USA, plus Italian-built tractors below 100hp.

Average horsepower of New Holland tractors built at Basildon last year was between 160 and 170hp, reflecting the demand for more power. Output for the Fordsons built at Dagenham in 1932 was about 24hp, but by 1964 the Ford models from the new Basildon factory probably averaged about 50hp.