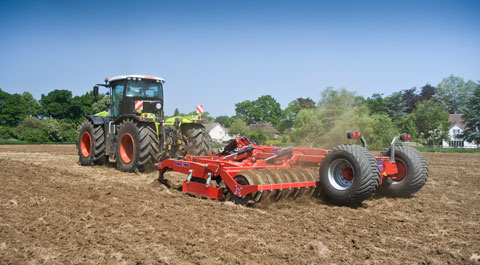 The early 1990s were a difficult time for Britain’s farm equipment manufacturers, but that was when Shaun Wealleans decided to start his own machinery business.

It was a time when many of the big names in the industry had already disappeared and more would follow as imported machines captured a bigger share of UK sales. Only an optimist with ideas and plenty of determination would think it was a good time to join the industry.

Engineering was his first schoolboy interest, encouraged by his father who was a farm manager. After school Shaun took an agricultural engineering course at Caythorpe College, Lincolnshire, where he acquired the nickname, Sumo, and after working briefly as a tractor driver he bought a van and started a mobile repair and maintenance service for tractors and machinery.

As well as the repair business, Mr Wealleans also began to build new machinery. Trading as SW Agriservices and working from a farm shed, he started selling the Sumo front-mounted press in 1992. It was his first product and also the first example of his determination to make machines that are different.

“I don’t want to follow the crowd, and that is always the aim when I design a new machine. I prefer to create a trend rather than follow it,” he explains. “On the Sumo press we used truck tyres that were much bigger and heavier than the tyres on other presses. We were told they would block up, but when we tested them on heavy land they worked really well because of the bigger diameter and extra weight.”

Being different also helped to make the Trio cultivator a major success for his company. It was introduced in 2002 using a combination of deep working tines plus discs and a press roll to make a one-pass seed-bed from stubble in most conditions.

It was not the first implement of its type, Mr Wealleans admits, but the previous tine, disc and roller combinations were designed for big tractors, which were not available on every farm.

The Sumo Trio was different: mounted instead of trailed, more compact to reduce the load on the linkage and with a power-saving disc-and-tine layout making minimum tillage available on a 150hp tractor.

With the Trio came the Multipacka press with its distinctive design including notched rings for clod crushing separated by convex ring shoulders to provide consolidation and levelling.

The success of machines such as the Trio and the Multipacka forced a move to a bigger factory, which was also an opportunity to change the company name to Sumo UK, but the “being-different” philosophy remained unchanged.

Recent additions to the range include the multi-role Versadrill, which has a novel set of subsoiling tines and can be used for direct drilling or work on ploughed land. Mr Wealleans has also launched his first grassland machine, the GLS subsoiler, and he has more ideas at various stages of development – and they are unlikely to be conventional.