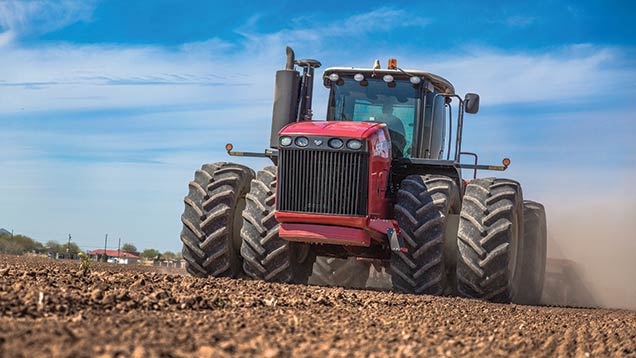 A neat hydraulic suspension installation for the front axle is designed to help avoid “power hop” with the most powerful three tractors in John Deere’s latest big four-wheel drive range.

Together with the option of an active steering system, it shows just how far the typical North American prairie tractor has come since the days when these leviathans were the epitome of simplicity.

They are still pretty basic in structure – two large frames constructed from thick steel plate connected at the centre by an articulation joint, with space to house a vast engine up front and a spacious cabin on top.

But long gone are the days when drivers stirred a manual gearbox and, in some cases, faced the challenge of working a reverse action throttle pedal – up for full throttle, down to slow the tractor for headland turns as a logical way to ease right-leg discomfort on interminably long runs.

Today, electronically-managed powershift transmissions are the order of the day, together with steering guidance, telemetry and leather trim in the cab to reward operators with the ultimate status symbol and comfort as switches are flicked and buttons pressed to operate the hydraulics and manage the drivetrain.

Here in the UK, growers disillusioned with tracked high-horsepower tractors for one reason or another have a choice of Case IH Steiger, John Deere 9R and New Holland T9 tractors, as well as the Versatile line-up from next year.

Following the successful introduction of the DeltaTrack models in 2014, importer JPM Agricultural will tempt wheeled tractor fans with the traditional Versatile product.

While all these tractors still have their basic power-slugging appeal, they also face competition from the European sophistication of the Claas Xerion.

It’s the only one in this power category with the ability to spread its footprint by running with wheels offset, the only one with continuously variable transmission providing different driving modes to optimise power, torque and fuel consumption and the only one with bi-directional capability.

The Xerion is a growing favourite among large UK arable farmers and has also started mixing it with the 4wd establishment in their own backyard. As a dual-wheel “prairie special”, it is also the first tractor supplied by Claas into the Usa.

What all these tractors have in common is copious amounts of power. The John Deere 9R range introduced for 2015 includes the most powerful Deere ever built, with 670hp from a 14.9-litre Cummins QSX engine in the 9620R eclipsing the 628hp (up from 616hp) of the 9570R.

An improved e18 transmission is installed, providing 18 forward speeds in a full powershift configuration and with Efficiency Manager control software providing intelligent features to benefit productivity and efficient use of fuel.

Hydraulic pump output has been given a substantial lift – standard UK installation is the 435-litres/min set-up (from 295-litres/min previously) to handle ever more demanding drills and cultivation rigs.

Operators get a revamped cabin and control layout with a redesigned CommandArm seat console, higher-resolution display, lower noise and vibration levels, and a seat that now swivels 40deg to match Case IH and New Holland rivals.

Beneath the cab, the top three models in the range feature the new HydraCushion front-axle suspension – a first for this type of tractor.

It comprises a cast cradle for the front axle differential casing, with two near vertical hydraulic cylinders at the front connected to horizontal accumulator “springs”. An electronic control unit and solenoid valves manage the system.

The hydraulic and electrical systems keep the differential case in a level and vertically centred position relative to the tractor’s chassis and independent of tractor weight or dynamic loading to maintain 101mm of travel.

Apart from absorbing bumps to give the operator a smoother ride, the main purpose of the design is reduce the “power hop” that can afflict four-wheel-drive tractors when pulling a heavy draft load, especially in dry conditions with a loose surface.

Although power hop – when the front tyres momentarily lose traction and set up a bouncing motion as they struggle for grip – can be pretty much eliminated with sufficient ballast and correct weight distribution with up to 55% on the front axle, the axle control provided by the suspension should also help.

Driver comfort is the reason for cab suspension being developed for the Case IH Steiger, and it remains a unique feature for these big 4wd tractors along with their New Holland T9 cousins.

In Britain, Case IH largely focuses on the Quadtrac version of its articulated tractors but does make available three-wheeled models, which benefit from a number of improvements after the latest round of upgrades.

While the top three power outputs – 605hp to 682hp – are reserved for the Quadtrac, the Steiger versions available here deliver 405hp, 462hp and 517hp from 8.7-litre and 12.9-litre FPT engines that keep their emissions clean using only SCR.

Two-stage turbocharging, with each of the turbos mounted in series having their own cooling system to help maintain air density, help generate power and torque with decent fuel efficiency.

Higher torque levels and a torque profile that produces more “lugging power” is claimed for the latest-spec engines, which channel their performance through a Univance 16-speed full powershift transmission.

Changes to the suspension-mounted Surveyor cab include a leather seat that is now fan ventilated and has an extendible lower seat cushion to provide more thigh support, and power adjustment fore and aft on the MultiControl armrest console.

Inside of New Holland T9 cab

Here, the tractor’s control joystick has been revamped with backlighting for night work and the addition of a thumbwheel to adjust transmission shift parameters and set cruise control, and the larger but differently sized buttons should make it easier to select functions by touch.

All are powered by FPT engines from within the CNH Industrial camp, in 12.9-litre Cursor guise for all but the lowest powered version, which has the 8.7-litre version, and all with SCR-only emissions technology.

A suite of electronic management functions helps the engine and transmission work as an integrated drivetrain.

Simplicity is a virtue at Versatile, so the Canadian-built artics may not exhibit this level of sophistication, but electronic functions are installed nonetheless – including flick-switch electronic spool valves and a guidance option.

Versatile’s Tier 4i range comprises six models, all Cummins powered and using Caterpillar TA19 and TA22 powershift transmissions. Both are full powershift units with 16 forward speeds, auto-shifting and speed matching, which selects the most appropriate gear when the tractor is slowed or brought to a stop.

Much emphasis is placed on the serviceability of the tractors. The Versatile axles, for example, have outboard single reduction units; mounting the final drive assembly on the end of the housing means servicing – which includes reversing the gears to extract extra life out of them – can be carried out without having to remove the axle.

Also, suspending the planetary hubs on large diameter bearings mounted directly to the axle tubes means the weight of the tractor is supported by the axle housing assembly rather than the drivetrain components.

If relative simplicity is the Versatile’s main virtue, then sophistication and mobility are those of the rigid chassis, four-wheel steer Claas Xerion.

There are now three models to the latest design following the introduction of the Xerion 4000 with 435hp earlier this year to replace the old-style 3800. The 490hp Xerion 4500 and 530hp Xerion 5000 complete the trio.

Unlike those two, the newcomer is available in S-Trac configuration with a fixed cab mounted in forward-control configuration over the engine to make as much use as possible of the load-carrying potential of the machine.

But for heavy tillage and drilling, the Trac and Trac+ versions with a fixed mid-mounted cabin are the ones to have. Trac+ specification includes front linkage and two hydraulic couplers, rear pto, a 50kph version of the CVT transmission, power beyond hydraulics, air braking and a swivelling air seat for the operator.

In the change-over to Euro Stage 4/US Tier 4 Final emissions spec, all three Xerion tractors have switched from Caterpillar to MTU Mercedes-Benz power – a 10.8-litre unit in the Xerion 4000 and a 12.8-litre version in the other two. Both use SCR to meet the standard.