You don’t have to be a clairvoyant to predict that farms will become increasingly important producers of energy. Whether it’s solar panels on barns or wind turbines on fields, they’re great places to produce power.

But it could be that biogas production, currently in its infancy, becomes even more important than wind and solar power.

Biogas is basically methane, produced when organic matter like livestock manure and plant material is digested by micro-organisms in an anaerobic digester without oxygen. Methane burns easily and can be used directly for heating or to fuel an engine, and most of the anaerobic digesters on UK farms power engines driving generators for electricity used on the farm, with the surplus sold to the National Grid.

Biogas is one of the strongest candidates for on-farm production of renewable energy, but it could also have a future role as a tractor fuel for farmers seeking energy self-sufficiency and an escape from rising diesel costs.

Two manufacturers, Steyr and Valtra, have already demonstrated tractors equipped to burn biogas while New Holland has also shown an experimental tractor that could rely indirectly on biogas.

Two tractors have been built for Valtra’s research program. The first was based on an N111 HiTech model powered by a 4.4 litre Sisu Power diesel engine adapted to run on both diesel and biogas.

Each fuel has its own injection system allowing the fuel balance to be varied on the move, and the engine can also run on diesel only. Power output is 110hp on diesel or with a gas/diesel mix, and the preferred operating mode is likely to be a 75/25 gas-to-diesel ratio.

Valtra’s second biogas research tractor was shown at last year’s Agritechnica event and is a T133 model with a six-cylinder engine and SCR technology. The T133, like its smaller stablemate, has a dual-fuel engine starting on diesel and the main benefit, the makers claim, is a fuel cost saving of up to 40% on an optimum dual-fuel mix compared with a similar tractor using diesel only.

The 2011 Agritechnica also saw the arrival of a biogas tractor from Steyr, described as a production model with a 2015 launch year. The Steyr tractor is the Profi 4135 Natural Power with a special gas burning engine from Fiat Powertrain Technologies. The 3 litre engine has 136hp rated output and burning biogas offers environmental benefits, the makers say.

Biogas – the pros and cons

Methane is said to have the lowest carbon content of any fuel, the exhaust emissions are odour-free and the particulate level is up to 99% lower than other tractor fuels. Compared with diesel fuel, biogas combustion produces 95% less nitrous oxide and 25% less CO2. The production tractor is expected to interest local authorities as well as farmers with biogas production.

One of the problems facing biogas tractor engineers is providing enough storage capacity to carry the gas. This is because biogas is difficult to compress and an hour’s work would need much more tank capacity for gas than for diesel.

The containers on Valtra’s T133 experimental tractor hold 170 litres of biogas at 200bar pressure, enough for a modest 3 to 5 working hours, but running out of fuel is unlikely because the standard 165-litre fuel tanks still carry diesel.

Steyr’s Profi 4135 biogas tractor has nine gas tanks with capacity for 5 to 7 hours depending on the work load. The gas capacity is backed up by a 15-litre petrol tank to reduce the risk of being stranded with empty gas tanks. 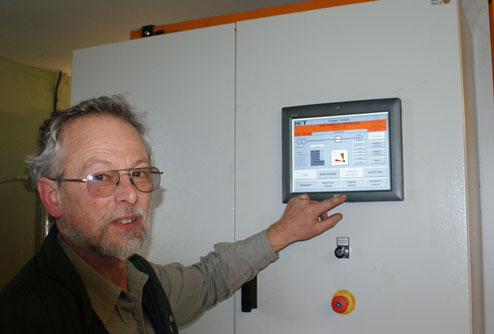 Methane is now widely used on Stephen Temple’s 230ha (560 acres) Copys Green Farm, Wighton, Norfolk. He’s not using it for his tractors yet, but he’ll probably be one of the first to do so.

The installation was completed in June 2009 but gas production didn’t start until November and the first electricity didn’t start to flow until June 2010.

One set-back was having to replace the original engine with a different make. He also switched to using piston pumps to move the liquid because the original rotary pumps were damaged by small stones getting into the system.

“Mechanical problems caused a significant delay before the digester started earning an income, but we also faced difficulties dealing with the Environment Agency,” he said. The routine operation of the digester and associated equipment is handled by the farm staff but Stephen Temple can monitor the performance of the plant at any time on his computer or mobile phone.

The equipment operates throughout the year, digesting manure from his 100-cow dairy herd and about 100 youngstock. Both liquid and solid manures are used, but dry, strawy material is excluded.

Gas from the digester, consisting of methane plus 40% carbon dioxide, is stored in a 350cu m spherical container. It fuels a 230hp MAN diesel engine equipped with high intensity spark ignition to cope with carbon dioxide dilution in the methane.

The engine clocked up 8658 hours in its first 53 weeks driving a 170kW generator while waste heat from the engine’s cooling system is used in the farmhouse and farm office, for grain drying and for cheese making.

Some of the heat is needed to warm the digester to maintain gas production levels in cold weather, amounting to an estimated 20 to 25% of total engine heat collected in a full year.

His feed-in tariff for grid sales is 12.1p per kWhr, but the current rate for new contracts is more than 14p. Approved users with suitable metering equipment can also qualify for the Government’s 6.8p/kW Renewable Heat Incentive payment.

Other benefits include virtually no loss of fertilizer replacement value from the organic material during digestion. Dr Temple stores the liquid in a lagoon and solids emerge as a friable material at about 30% dry matter content, making it easy to spread.

What is lost during digestion is virtually the whole of the highly polluting biological oxygen demand (BOD). Most of the unwelcome smell associated with slurry handling and disposal is also eliminated, a definite benefit for those with non-farming neighbours. 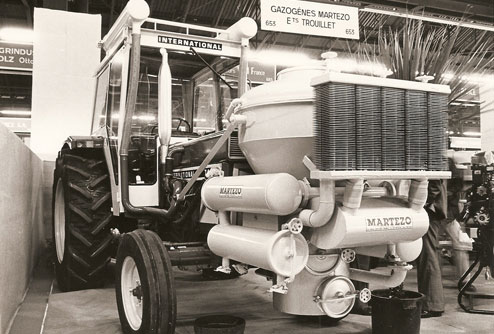