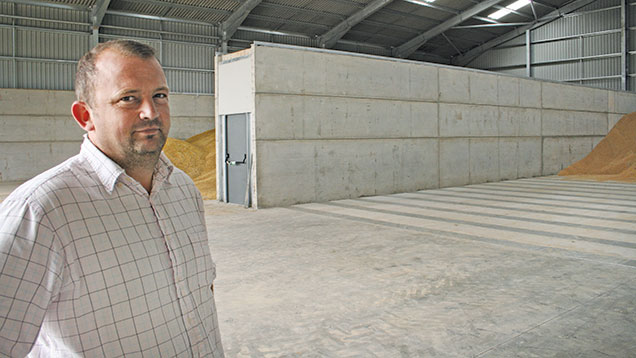 The opportunity to tap into renewable energy payments and an enthusiasm for energy-efficient farming has resulted in novel features at a grain store in Scotland. Peter Hill reports.

This year’s harvest might not have put the sort of strain on the grain dryer that UK farmers have become accustomed to, but getting crops down to an acceptable moisture level will always be a job that eats into crop profit margins.

However, having the capacity to store and dry your own grain can save some price punishments from the merchants, and the savings can be even greater where there is the chance of using renewable energy to trim the drying bill.

From the outside, the new storage building at Savoch Farm, Foveran, on Scotland’s east coast, looks much like any other farm grain shed. 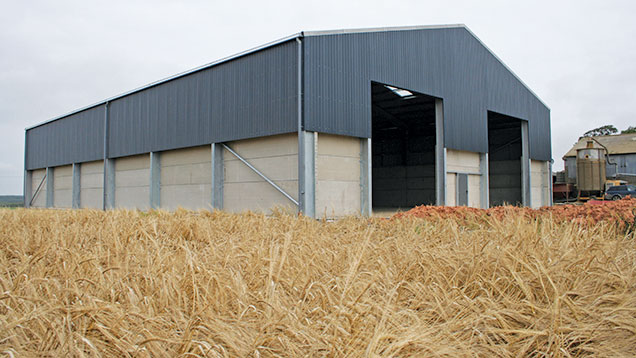 Everything is hung from a run-of-the-mill galvanised-steel frame, heavy-duty concrete grain walling and a fibre-cement roof. Grey, Plastisol-coated cladding helps the building blend into its surroundings.

But a closer look reveals some far-from-conventional features – a bespoke, heavy-duty drying floor, stirring augers with a unique moisture-sensing control system and, tucked in a lean-to at one side, a woodchip burner supplying heat for drying.

“The biomass burner is the main reason for our investment in the new building,” says farmer Andrew Booth.

“We’re looking at an eight-to-10-year payback regardless of grain prices, once you’ve taken into account the renewable heat incentive payments and the reduced energy consumption.”

The 1,000t store, constructed by Inverurie-based Rapid Project Development, is a leap forwards from the tray and mobile dryers used previously, and a store that was no longer fit for purpose.

“We couldn’t tip trailers in it and it didn’t have the capacity for our growing acreage and improving yields,” says Mr Booth. 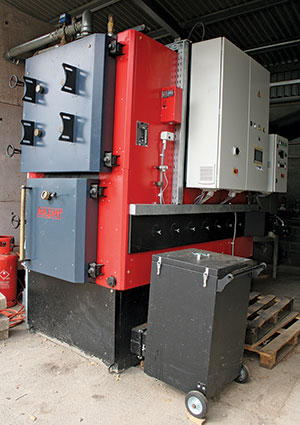 “The new facility gives us modern, on-farm storage and an efficient drying plant alongside the tonnage we already have with the Aberdeen Grain co-operative.”

The 36m x 24m building was designed with expansion in mind. The gable end and its two large, roller-shutter doors could be removed, a side door slotted in and another five bays added to the existing six. The lean-to housing the heat plant is big enough to accommodate a second woodchip boiler, too.

With no malting barley crops to complicate matters, a bulk floor drying system was chosen for the arable farming enterprise, which typically cuts 485ha to 600ha of feed wheat, winter and spring barley, and spring oats every summer.

The drying floor and central air tunnel – constructed from concrete panels – are confined to four bays of the shed. These have capacity for 600t of wheat on one side and 500t of barley on the other.

The locally made concrete grain walling panels are standard fare – there are two 1m panels sat on top of a 1.5m base panel – all 140mm thick. However, the drying floor is a bespoke structure, comprising 400mm-deep below-floor laterals spaced at metre-wide centres to cover 40% of the surface area.

A key difference from a standard ventilated floor is that Mr Booth’s would need to withstand extra traffic from trailers and loaders involved in drying the woodchip, which is also a more abrasive material than grain.

The solution was to form 2mm galvanised steel into U-shaped laterals that would be rigid enough to also act as concrete shuttering. The concrete was then poured in the space of three days, rather than the three weeks it would have taken laying a section at a time.

Wireless moisture sensors fitted to the grain-stirring augers get a picture of moisture content distribution throughout the grain, and a touchscreen display can be used to move the augers to a specified section to even things out.

Automatic fan control is also installed as a means of improving energy efficiency – as the grain dries and presents less air resistance, the fans automatically adjust to maintain a consistent flow. That should mean the fan’s workload reduces as the drying progresses.

Inspiration for using biomass as the heat source came from Andrew Booth’s cousin Hamish Watson, who farms at nearby Mintlaw and was the first grower in Britain to get RHI payments for a biomass-fuelled grain-drying installation.

After storage in the round, a contractor converts the farm’s own timber into G50-size chips. These are taken down to 10-15% moisture on a tray dryer before being stockpiled undercover in bunkers alongside the boiler.

“We’ve had peak output of 537kW, the ash is almost non-existent and we’re getting 70-76C in the air tunnel once the heat has been extracted by the exchanger,” he explains. “With 55C uplift over ambient, you are able to dry grain quickly and keep the combine going.

“Instead of worrying about paying out £15,000-20,000 in diesel for the dryer, it doesn’t really matter how much drying we have to do,” he adds. “We’re saving 6p/kWh, getting RHI payments amounting to almost £8,500 a year and expect a payback in two to three years.”