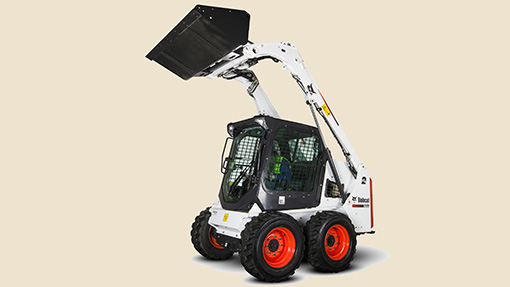 Bobcat has added a new model to its skid-steer range. Called the S450, it replaces the 130 model and is said to give much improved comfort and visibility. Also, for the first time in a skid-steer loader model in this size class, the S450 loader is supplied with a fully pressurised cab with air-conditioning as an option.

Hydraulic performance has been increased, too. The exhaust silencer is mounted directly to the engine to reduce noise and vibration and refuelling of the loader in transport position is said to be easier with the tailgate door now opening to the left.

Both the oil cooler and radiator are now a combination unit that provides a cleaner cooling environment less likely to trap debris and to aid routine cleaning. The main hydraulic filter is now a long life cartridge-type filter and the filter replacement intervals have doubled to 1,000 hours. Also, the hydraulic sight gauge is now mounted under the rear screen and is easily visible during routine checks. Prices have yet to be announced.