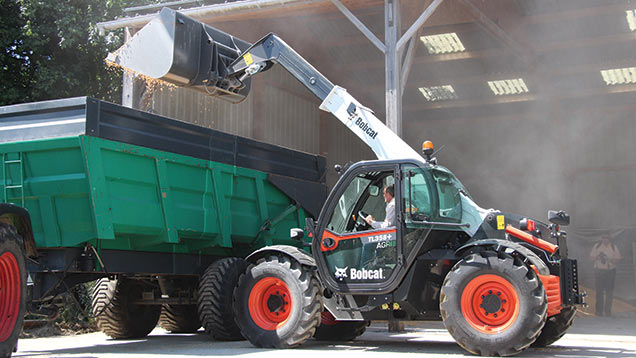 Despite making its name with smaller loaders, Bobcat is far from new to the telehandler business.

The skidsteer specialist bought French maker Sambron back in 2000 and, in doing so, took on a company with a telehandler heritage stretching back to the 1980s and its Pontchateau factory near Nantes, France.

Since taking over the plant, Bobcat has been noticeably quiet in the agricultural telehandler market, instead concentrating its efforts on the construction side of things.

However, growth in agricultural telehandler sales has caused the company’s ears to prick.

“Over the last 15 years, the agricultural market has been on the rise, while the construction industry has been sinking,” explained Olivier Traccucci, global product manager.

In response to the growing market, Bobcat has been busy trying to establish a dealer network to support farming customers.

Since 2011, Bobcat’s whole range of telehandlers has been renewed.

There are now 10 models available – six of which are suited to agriculture – and the factory’s mixed assembly line allows for all models to be made at the same time, if and when required.

The super-compact T2250 is not available in Europe due to engine homologation issues, but there is still the compact TL358 and TL358+ models and the larger TL360, TL470 and TL470 HF.

There are also clever features like the Smart Handling System (SHS), which allows users to set boom speeds for precise movements, and speed management enabling slow travel speeds even when the engine is flat out for tasks like straw blowing.

Massey Ferguson’s range of telescopics is also made at the plant.

The TL360 can handle the same 3t but to 6m and is on a larger chassis.

The larger TL470HF, which Bobcat believes will appeal to larger farmers and contractors, lifts 3.5t to 7m and has a 190-litre closed centre-flow-sharing pump.

The main frame is box welded from 8mm plate steel to handle rough terrain conditions while the bottom of the machine is plated to protect vital components such as the transmission.

Dana Spicer axles are used across the range.

The boom on all machines is welded in two parts and hydraulic hoses and extension cylinders are all protected within it.

Bobcat opts for a longitudinally-mounted Deutz block in all machines destined for the European market, while for less-regulated markets Perkins Tier 3 engines do the job.

These use a DOC-only system with optimised after treatment, meaning there’s no DPF.

There is no downtime for regeneration, a big factor for this sort of product as most are run at low revs, according to Bobcat.

It is also a maintenance-free system and there is no extra fuel burn required, the company says.