Finding the perfect high-capacity slurry spreading system forced one Scottish contractor as far afield as the mid-west of America on a hunt for the best selection of component parts to use in his home-built set-up. Oliver Mark got knee-deep in the details

Selkirk contractor Paul Nixon has managed to increase his slurry output to as much as 500,000gal/day through a single gang by assembling his own high-output spreading system.

His rig is a combination of what he reckons is the best kit about and includes a pump shipped in from the US, a monster Iveco block and a home-built trailer to haul the gear from farm to farm.

His team hikes up to 55 miles from base to spread slurry on stubbles, grassland and standing crops.

Customers are billed on a per cu m basis, so his home-brewed system was designed to get maximum flow through the dribble bar applicator as workloads grow and weather windows tighten.

Why build his own?

The idea came from a jaunt to mid-west America, where he visited a huge 100,000-head, indoor-housed dairy shifting 3,500gal of slurry every minute to a network of lagoons extending to the boundaries of the farm.

The 2ha slurry lakes store up to 20m gallons of waste ready for spreading on maize ground with an artic-steer John Deere 9630R and deep-tine applicator.

Monster engines and pumps are sent out on pontoons to keep the slurry stirred and stop it settling before it’s shifted another two miles to the next lagoon down the line.

The game-changer, from Mr Nixon’s point of view at least, was the 6in hose that was able to provide enough slurry to bring the big 500hp Deere to its knees.

Those big American dairies were using Cornell pumps, made in the west coast state of Oregon.

Some had seen as much as a million cu m of slurry pass through with practically no signs of wear, so Mr Nixon was confident that the single pump would be adequate for his system – even with 3,400m of arterial pipework unravelled. 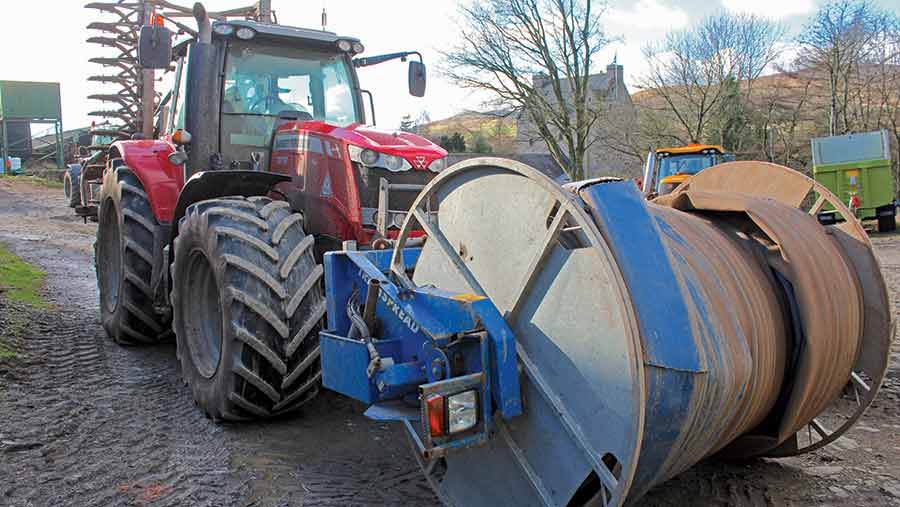 The company builds systems with 19.5in (500mm) impellers that sap as much as 450hp and require seriously wide-bore pipework to make the most of them.

That seemed a little extreme for small Borders farms, so instead Mr Nixon forked-out £9,000 for the slightly smaller 17.5in (445mm) impeller – still a monster compared with the girly 13.5in (340mm) Doda system it was to replace.

And while the old pump used a gearbox to crank up the impeller speed, the Cornell was to spin at the same speed as the engine’s crankshaft to minimise housing wear.

The pump was packed into a container along with a few other bits and bobs, and shipped across the Atlantic for £1,500.

The hassle of the job has since been reduced after Lancashire dealer Whittingham Farm Supplies announced it was to take on the Cornell import job for the UK.

With the American pump and wide-bore pipework stashed safely in the workshop, Mr Nixon headed back out on the prowl for a static engine to save sacrificing a tractor to run the rig.

The Cornell unit wanted the fat end on 400hp to keep it ticking along at 1,500rpm, so he fished out fuel figures for each of the engine contenders – Volvo, Scania, Caterpillar, John Deere and Fiat.

The latter’s Cursor 10 oil-burner came in 20 litres/hour better than the rest, so a £18,000 order was put in to Nottinghamshire-based Mitchell Powersystems for the 9.8-litre block and all the engine accessories.

But, because the engine was part of a bespoke, one-off build, Mr Nixon managed to dodge the extra cost and faff of fitting an AdBlue system to reduce emissions.

The engine flywheel connects directly to the pump via a dry flange that uses rubber lugs on either side to lock the two together.

The Americans tend to fit a gearbox between the block and pump to increase the output, but the extra cogs bring more complexity and put added strain on the system, so Mr Nixon stuck with the simplest arrangement.

The engine and pump are fixed to a rigid frame without rubber engine mounts that would otherwise give it the chance to wriggle while it’s running.

In the future, Mr Nixon plans to use a satellite-operated remote control start/stop, that will allow the operator to blow the pipes out from the comfort of the tractor cab.

It’s no good running a meaty pump without the pipework to cope with the prodigious outputs.

Mr Nixon recently upgraded the farm’s 4in tubes to 6in Snap Tite gear that came in the same UK-bound parcel as the pump.

He reckons the wider bore reduces the stress on the hose, and slurry is pushed through at around 5bar pressure rather than the 12bar strain that takes its toll on the 4in stuff. 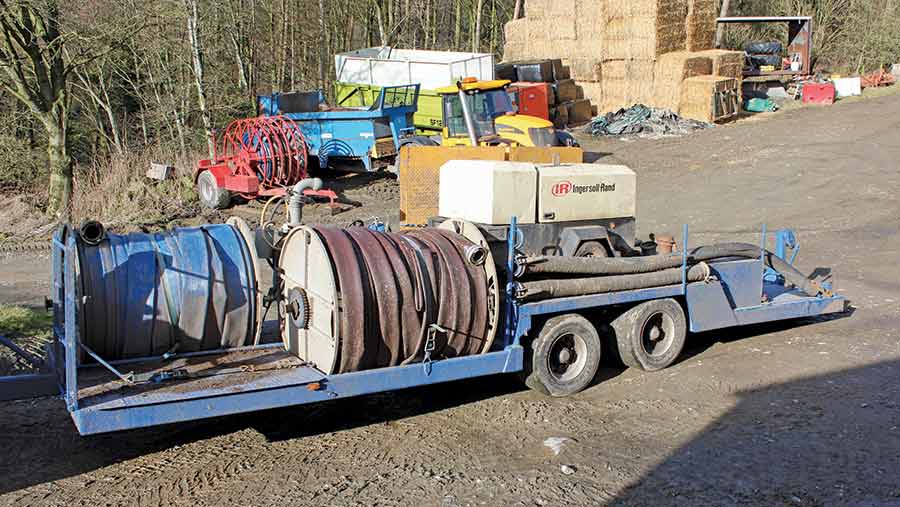 However, the narrower pipe still gets a run-out when the fields are wet. The sheer weight of slurry in the 6in pipes – as much as 3t in 200m – means dragging it around can make a serious mess, so the only option is to pull out the 4in or 5in pipework and reduce the throughput.

The Cornell pump pushes the slurry to a 7.75m Joskin trailing shoe set-up hooked to the back of an MF 7618.

The system shows flow rates through the 36-point Vogelsang macerator via an Isobus connection to the in-cab Datatronic screen. There’s also a meter fitted to the pump end, which allows the pump man to keep tabs on the flow.

However, with four seasons now under its belt, the old Joskin is set to be upgraded to a 12m or 15m shallow disc injector for grassland work.

The bigger wings will allow the team to run wider and pump harder, which could potentially see some jobs finished in a fraction of the time to make the most out of the slurry during good weather.

Mr Nixon is also waiting for a brand new 24m Vogelsang dribble bar to be delivered, which he plans to use for spreading slurry on standing crops.

It comes with small air-activated balloons in the supply tubes to limit the flow and allow variable rate application using a Greenstar guidance system to keep on the straight and narrow.

The dribble bar will also be fitted with a flow meter to keep tabs on the quantity of slurry being shifted – an important factor given that some farmers are using slurry to replace almost all of the nitrogen requirements for their wholecrop.

Mr Nixon dug out another £20,000 to build the ultimate 32ft slurry gang trailer. Granning axles, 180 x 405-drum air brakes and air suspension mean it’s easy to pull on the long treks away from the farm, and it carries everything required for the average slurry job. 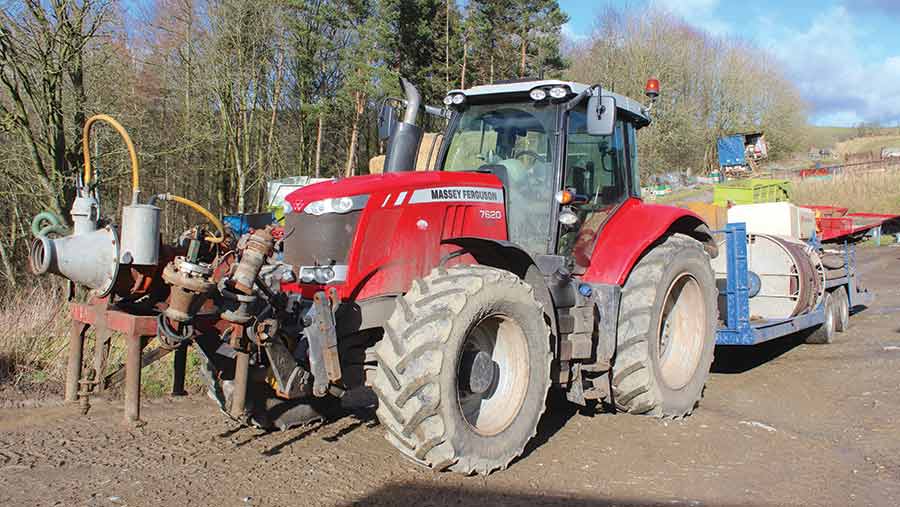 The two bobbins drop into open sections of the framework and a ratchet over the top squeezes them in place.

A ramp at the front provides the ATV with its own parking space and two pig launchers sit in front of the axles, just ahead of the compressor.

The 990-litre fuel tank for the static engine slots down into the chassis, which feeds the engine hidden in its sound-proofed shell, and two sets of road crossing ramps are also hauled around to keep the traffic moving while the slurry spreading takes place.

Hinged chequer plate flooring above the axles is improves access to the running gear and a jack at the back can be used to keep things level during work.