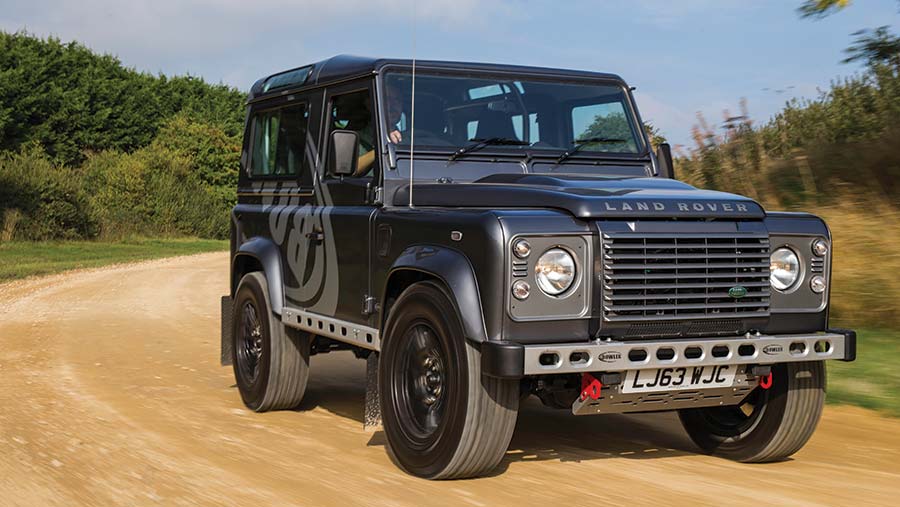 If you’ve got a Land Rover Defender, but find it wanting in the power and handling department, you could take it for a pepping-up session at Bowler Motorsport.

Bowler Motorsport made its name taking run-of-the-mill Land Rover Defenders, shoehorning socking great V8s under the bonnet, beefing-up the suspension and using them to win races – lots of them.

Such was the success of founder Drew Bowler’s engineering prowess that the firm’s uprated 4x4s have gone from competing at UK-based hill rallies to taking on the world’s best at the infamous Dakar in South America.

For those with deep pockets (seriously deep ones), it’s possible to get in on the top-end racing action.

The Derbyshire firm’s EXR Dakar-spec racer costs £185,000, and for that you get a 380hp Land Rover V8 with 700Nm of torque, a 0-60 time of around 5sec, a state-of-the-art racing chassis and a custom body made out of many exotic materials.

But for those just looking to get a little more go from their farm workhorse, there’s a slightly cheaper way of getting a Bowler badge on the bonnet.

For the past few years, Bowler has been offering a fast road conversion for standard four-cylinder Defenders. This involves remapping the engine, fitting uprated suspension, bigger brakes and giving it a series of other performance tweaks.

The standard engine tune – called Stage 1 – ups the Landy’s 2.2-litre four-cylinder power output from around 122hp to 170hp. Bowler does this by giving you a brand new ECU, meaning that if you want to revert back to original spec, you can just refit the old one.

If that’s not enough there’s a Stage 2 version too. This is a bit more involved and includes fitting a bigger turbo a new exhaust and race specification intercooler, and a slightly different ECU map. The payback is an impressive 195hp and 515Nm, though, the same power that you get in Bowler’s entry-level racer, the Defender Challenge (see Fancy racing a Bowler?)

But the suspension upgrades are arguably more impressive than the power hike according to Bowler.

By fitting custom springs, Bowler-spec Bilstein dampers, uprated anti-roll bars and bushes, and a revised steering damper the handling is apparently much more sharp and predictable than standard.

The sophisticated damping also adjusts according to the level of impact, ironing out imperfections in whatever surface you’re driving on.

To sharpen-up direction changes Bowler also fits an uprated steering damper and smaller Momo racing wheel. As well as improving handling, the smaller wheel frees up a bit more valuable space for the elbows – a long-standing bugbear with Defender owners.

An external front roll cage is also available as well as an optional set of Bowler decals and heated Recaro racing seats.

Around half of all Bowler’s fast road conversions are carried out on brand new Defenders. Some of these are vehicles that customers bring to Bowler after they have bought them. But a large chunk are machines that Bowler sources direct from Land Rover and sells to customers completed.

End of the Defender

Although Land Rover production has come to a stop, Bowler says it has a few with fast road conversions still available. Quickly scribble a cheque for £50,000 and you could possibly get your hands on one.

For that you’re shelling out around £30,000 for the vehicle from Land Rover and £20,000 for the conversion work from Bowler.

Although many people do have the full conversion, it’s possible to just pick and choose the bits you want.

Racing spec brakes are another popular one and tip the balance at £4,200.

As well as the fast road conversions, Bowler carries out a number of bespoke engineering projects. One involved fitting an early Series 1 Land Rover with a V6 petrol engine, disc brakes all round and air conditioning.

Another, slightly livelier, project was to slot a 400hp supercharged V6 and auto gearbox from a Jaguar F-Type into a 110 double cab pickup.

Motorsport is almost always expensive and let’s not pretend for one minute that Bowler’s entry-level racer is going to be cheap.

However, getting into the Bowler Challenge racing series is a good bit less expensive than shelling out for a EXR Dakar-spec machine.

If you already own a Land Rover Defender fitted with the 2.2-litre TdCi engine, then you’re already halfway there. To get it up to race spec involves shelling out around £20,000 on a kit that includes many of the same components as the fast road conversion.

Annual fees for the seven race meetings add up to £7,500 and you’ll need to set aside a few quid for fuel and repairs, too.

There’s also a Rolls-Royce Ride and Drive package where Bowler does everything for you and you just rock up on the day. That privilege will cost you an extra £12,000 though.

*Are you a farmer and into 4×4 motor racing? If so we’d love to hear from you. Email with a few details to fwmachinery@rbi.co.uk

Bowler has also announced that it is working on a new version of the top-end EXR racer that is expected to be ready for testing by June or July.

This will be built to meet the latest racing specifications and will produce a similar amount of power to the outgoing EXR.

But what’s potentially more interesting to the average Land Rover enthusiast is that the maker is hoping to make road-going versions, some of which might have diesel engines and be suitable for utility tasks.

Unfortunately, it looks at though they’ll be a good bit more expensive than the current defender though.