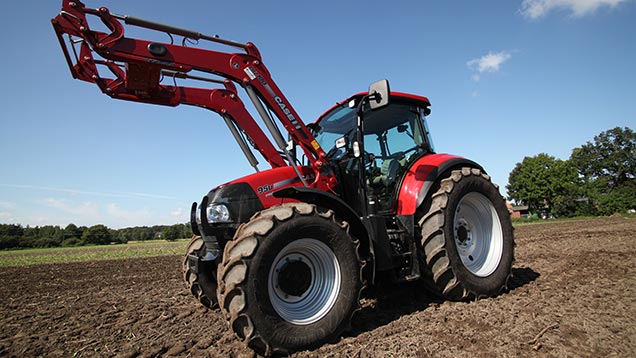 The Austrian-built Farmall shares the same six-post cab frame as the New Holland. This offers pretty much everything you need from a loader tractor, including a curve-topped screen, large roof window and a decent amount of space for you and the occasional passenger.

The drab black and beige interior is a bit on the depressing side, but it’s tough and looks like it will take more of a hammering than some.

Controls are well laid out and it’s obvious it shares plenty of genetic material with its Italian-built sibling. But there are plenty of differences, too. First, Case managed to find enough pennies in the sub-£60,000 budget for a multi-function joystick on the lanky main gear stick. It was the only tractor to have one and was home to most transmission controls, rear linkage and engine-rev memories.

It’s also got the usual Case slider next to the hand throttle for adjusting the upshift point in auto-shifting mode. It’s a bit confusing to start with, but makes sense once mastered.

The 99hp FPT engine slotted under the Case’s bright red bonnet added to its growing list of Brownie points.

When coupled to the pto brake we recorded a respectable 89hp, which put it bang on the group average. But when working at its most efficient it managed to muster a meaty 84hp, compared with the New Holland’s 69hp.

In the rest of the tests it tended to use less fuel than the group average and at max power it sipped 261g/kWh, putting in third position behind the New Holland and McCormick.

The addition of two engine-rev memories was also handy for field work. Our only grumble was that we couldn’t set the revs by pressing and holding the buttons. Instead we had to use the switches on the side console.

Power finds its way to the wheels via a ZF 32-speed powershift box, which was easily the highest spec on test.

This meant it came with luxuries such as auto shifting, speed matching and plenty of settings to play with. Some could argue that’s a bit of overkill for a 100hp tractor, but it made it a good bit slicker to drive than some.

The box’s two ranges are shifted using a lever on the left mudguard that’s simple to use, but also perfect for bashing your funny bone. Meanwhile, a gangly main gear stick handles four gears and four powershifts via a set of rubbery buttons.

At first glance the long stick looks like it will be as positive as a hockey stick in a coconut barrel, but thankfully the tight gate means it doesn’t travel that far and the buttons are never too far away.

Another bonus for field work was that the Case came with 38in Continental tyres as standard. That meant it gripped well with the plough in tow and made for a pretty smooth ride on the road. But its lazy 10.6m turning circle meant it was far from ideal for spinning around in tight yards and it could only carry a payload of just over 2.6t – the smallest on test.

The Austrian tractor was also the only one on test to have automatic four-wheel drive and diff-lock.

Despite its tillage tractor stance, the Case didn’t have the heftiest back-end. The Cat-2 link arms lifted just 4.6t, which was below the test average and decidedly weak compared with the Valtra’s 5.2t.

The tight budget meant Case could only stretch to two manual spools and its hydraulic pump was less energetic than a 90-year-old’s ticker. Max oil flow measured just 65 litres/min and a max oil pressure of 178 bar was the lowest on test. A bigger 100-litre/minute pump is standard in the UK though.

The pto was well-specced with four speeds as standard as well as an auto mode and soft-start function.

Case’s LRZ 100 Stoll-built loader was almost identical to the one on fitted on its blue brother. But while the New Holland could lift more than 2t, the Case struggled to get to 1.8t. It also has a basic cable-operated joystick.

Clever work with the options list meant Case-IH delivered a much higher-specced machine than its blue-liveried brother. The engine was strong and the gearbox pretty slick, but the back-end and hydraulics were a bit weedier than expected.