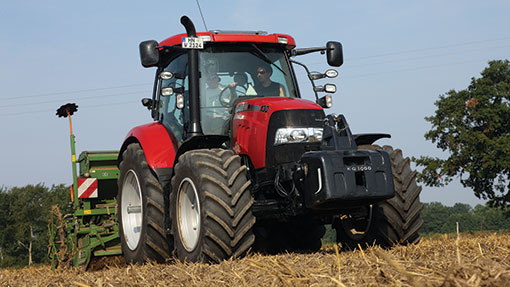 CNH was represented by the red-liveried Maxxum and its economical FPT engine scored highly. But it had a limited number of transmission settings and the monitor wasn’t as well integrated as its rivals. Base price: £83,332

Three steps lead into Case’s short four-post cockpit. Its milky-brown interior is a little short of inspiration and the low roofline and large armrest combine to leave a pretty cramped feel, particularly when compared with the Tardis-like John Deere.

The big door swings wide but can take some wrestling to haul shut. Access to the seat is OK and, unusually, a lidless tray replaces what would normally be a dashboard in front of the steering wheel.

The view forwards and to the left is fairly uninterrupted, but rightwards it’s blocked by the optional, but bulky, mounting bracket for incoming implement monitors. Sockets for the extra screens are clustered at the base of the pillar.

Controls are based around a big, colour-coded blister pad on the armrest. It’s called the ICP and regularly comes in for praise in our multi-tractor tests. Part of the reason it’s so popular is that it’s the same on all Case tractors up to the Quadtrac.

One downside to the blister button layout is that all the controls feel the same so you’ll need to have a quick glance to guarantee you’re pressing the right one.

The armrest also houses the chrome-wrapped Multicontroller handstick. It’s available on all top-spec Maxxum models and deals with controls for directional and gear changes, one spool, raise/lower of the linkage, the hand throttle and headland management.

Our test machine was fitted with the AFS 700 monitor. The touchscreen is mainly designed to show what’s happening rather than to alter more detailed settings. There are six run screens and almost endless options for customising displays, but we found the menu layout far too complicated.

Cab noise was above the average and there was a hint of exhaust rattle at higher revs.

As usual, Case plumps for an engine from sister company FPT. The 4.5-litre unit provided up to 131hp at the pto and the boost increased power output to 146hp.

At 223g/kWh the Case displayed almost Nissan Micra-style economy at the pto shaft and, even with AdBlue included, the Maxxum managed an impressive 228g/kWh without boost.

It was a similar story with consumption in the boosted six-point load test. There it recorded 255g/kWh (including AdBlue), which was about 4% better than the group average. The focus on frugality means Case has also set the engine idle to drop to 650rpm when the transmission is in neutral.

We liked Case’s unusual approach to hand throttle control – the whole handstick slides forwards and backwards, which means you rarely need to lift a finger from it.

Two engine speed memories are available – Auto 1 and Auto 2. These can be quickly programmed by pressing and holding or, alternatively, through the ICP blister pad. They can also be set on the terminal and the operator can switch between the two using the drivestick button.

Case’s powershift transmission is a bit of a head-scratcher. It’s split into two ranges, low and high, by a slightly ungainly mechanical lever to the right of the cab. Powershift speeds are split into groups within each of the ranges.

Our 50kph version had 17 forward speeds and 16 going backwards. However, in the working range from 4-12kph we recorded just seven speeds and found the overlap between groups was too short. It can also be a laborious job to thumb your way through every powershift step when you want to pace up to top speed.

The auto function has two modes. Field mode sees it climb up and down speeds within a group (which are split 1-4, 5-8, and 9-12). In transport mode (gears 9-17) the tractor will fire up and down the high range, but it is possible to set higher and lower gear limits.

There isn’t the abundance of transmission functions offered by rival tractors, though. There’s no eco/power knob to tweak the shifting point of powershifts, and gearbox settings can’t be adjusted through the main monitor.

Directional changes can be controlled by the dash-mounted shuttle or by handstick buttons. The unconventional shuttle design means that neutral is found by pressing a button on the nose of the stick and there’s no park position either, which is a big miss.

Maximum draft power was measured at 112hp, the worst of a well-spread test group that ranged up to the Valtra’s 137hp.

But the tractor was shown to be super economical when pulling a load. Specific consumption, including AdBlue, was 265g/kWh, which was the best and well below the test average of 280g/kWh.

Well-labelled buttons on the ICP deal with four-wheel drive and diff-lock. Automation of these is according to speed and steering angle.

At 11.2m the Case claimed one of the better circles, which is mainly the result of its 2.45m wheelbase, and three-and-two-third turns take the wheel from lock-to-lock.

But there are no pop-up displays on the monitor to show settings changes as you twizzle the different knobs and the depth wheel is missing a stop.

External linkage controls are plumbed into both rear fenders. You can spec permanently assigned controls for the third valve as well, which might be handy if you opt for a hydraulic top link.

At the DLG, the Case lifted almost 6.3t on the links, which was 550kg lower than the test average but not surprising given the tractor’s Tonka-toy dimensions.

The Case came in considerably lower than the test group in hydraulic capacity, too. The pump pushed out 99 litres/min to one spool and oil flow reached just 97 litres/min to two valves. The 33 litres of removable oil was lower than average, too.

Three hydraulic valve outlets are plumbed to the right of the top link, which can make coupling awkward. One of those can be controlled by buttons on the handstick and there are three fingertip paddles for the other valves. A fourth spool can be added at the back if you raid the options list.

There’s also a cross lever, but this locks awkwardly and it’s not possible to change which controls work which spools.

The main monitor and secondary LCD screen can both be used to adjust hydraulic oil. Flow can be tweaked in both directions and according to time, as well as priority valves and spool locks. But headland management has limited functions – sequences can only be recorded and editing is restricted to dropping in pauses.

A yellow-topped mechanical lever selects one of the three pto speeds – 540, 540e, 1,000 if you buy a UK-spec tractor – and power is engaged by a switch on the armrest. Fender switches will turn the pto all the time you hold the button.

Automatic functions are good, too, and automatic switching can be adjusted on the monitor. But to put it into a headland management sequence you have to link the pto to the linkage control.