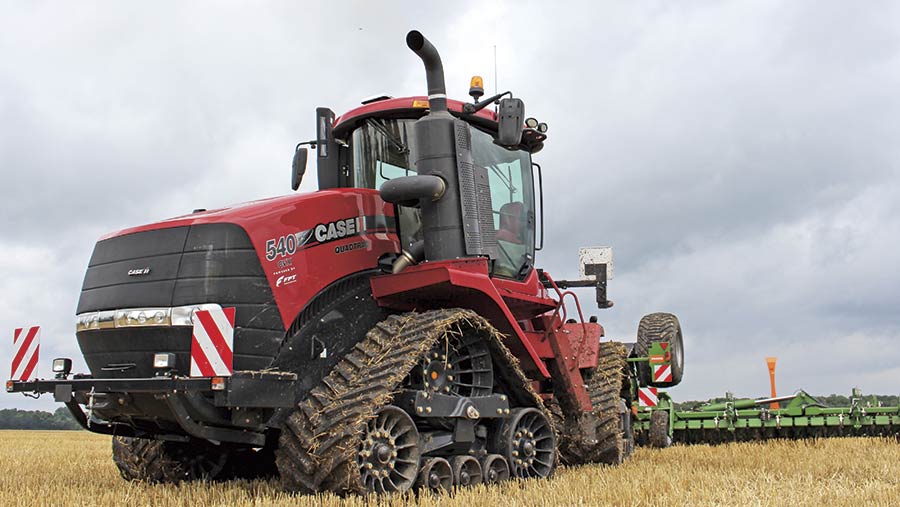 Case-IH’s decades-long domination of the high-horsepower tractor division has been called into question over recent years with new four-track crawlers from John Deere and Versatile.

But, in a bid to keep one step ahead of the gatecrashers, the American firm has added a brand new ZF 6.0 continuously variable box as an option alongside the old-school powershift. The new box slots straight into the vacated space and has been designed exclusively for the Quadtrac.

That said, if the new models sell like hotcakes then don’t be surprised to see a 620 CVX in the near future.

CVT gearboxes have a reputation for sapping power compared with powershift alternatives, but Case claims its new box only suffers a 5% drop in efficiency against the standard machine.

There’s no question that it’s smooth and, from a standing start, it will hit its 40kph limit in around 11 seconds without a whiff of cog changes or gearbox noises. Those stats are all the more impressive given that it weighs in at 24.5t.

The new models keep the adaptive steering seen on the current models and Accuturn, which automatically carries out headland turns.

Elsewhere, the hydraulics have a huge 428-litres/min flow with a maximum eight spool valves available, while in the cab the semi-active seat and armrest carry the AFS 700 terminal to control all the tractor settings.

Case reckons 15-20% of Quadtracs will be sold with the CVX box in the first year, although that figure could be significantly higher in the UK.

The first production models will be on British shores early next year, with demo machines in the country before Christmas. Expect to pay a price premium between £28,000 and £36,000 for the luxury of stepless.

The mid-sized Maxxum tractors have a new transmission option – Activedrive 8. The new box houses 24 gears arranged in three ranges, with eight gears per range, and slots in above the existing four-stage powershift, renamed Activedrive 4.

Under the bonnet, the flagship Maxxum 150 gets the six-pot FPT 6.7-litre engine, while the rest of the range makes do with a four-cylinder FPT 4.5-litre engine and all models meet stage IV emissions regulations.

A majority of field or loader work is likely to be carried out in B range, which offers speeds of 1.6kph to 18.1kph without switching ranges for unbroken torque delivery, says the company.

The double-clutch technology used on the CVX transmission has worked its way onto the powershift transmission so, for loader work, the brake-to-clutch function makes stacking bales or loading trailers a clutch-free job and stopping at road junctions will also be simpler.

Adaptive steering wheel gearing means fewer turns of the wheel from lock to lock and improved control at higher speed, while the front loader gets a new joystick housing a forward/reverse shuttle.

The Maxxum has received the Optum-style bonnet and cab roof with either LED or halogen lights set into the front grille and you can choose from three seat options in the cab. A 4.5% increase will be added to the price for the new transmission.