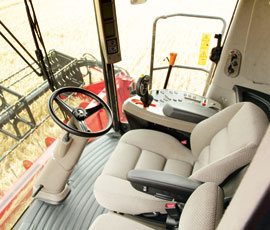 With harvest drawing to a close over much of the UK, combine makers are taking the opportunity to launch next year’s harvesters.

Case is one of those, adding several new features to its 2013 Axial-Flow offering including a folding auger and pivoting spout to help trailer filling.

The largest auger available – for Case’s largest combines – is the folding 8.8m version. Opening to 95 degrees, the operator should get a good view of the spout. When folded, it sits within the width of the combine side panels.

A potentially hassle-saving option is the pivoting spout, which is available for all high-capacity unloading auger lengths. The operator is able to position the spout precisely to prevent overfilling. Case also points out that using the pivoting spout can avoid the need for the tractor and trailer to run over straw swaths.

The operator can adjust the flow of grain by using controls on the joystick. When the unloading auger is disengaged the spout automatically pivots upwards to prevent any grain from dribbling out.

Changes have also been made in the spreading department.

The combine can be switched from chop to swath in under a minute and in-cab adjustment of the counter knife bank on the chopper can be done in four steps.

If the emergency stop button on the joystick is pressed, the counter knife bank will fully retract to help protect the chopper and counter knife against foreign objects.

IAn enhanced chaff spreader option, which includes in-cab adjustment of the spread distance and distribution, is available too.

Case reckons its redesigned cab is the largest and quietest on the market. For those that want a little more luxury there’s also the option of a higher-spec cab, including brushed-chrome switchgear and a red leather seat.