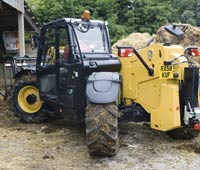 A familiar name in the construction and earth-moving market, Caterpillar’s venture into telehandlers suited to agriculture is a relatively new direction for the firm.

But that doesn’t mean it has no products suited to farm tasks, as the machine FW put through its paces proved all too well.

Step aboard the TH407 and it’s fair to say the first feeling is one of beng a little cramped. Maybe that’s because the cab is a hangover from the construction market, where operators are less likely to spend long days loading grain wagons or shifting bales. But, according to the spec sheet, the cab is a full 40cm wider than the equivalent on non-agricultural models.

Having spent a good eight hours in the cab loading a muck spreader and cleaning out sheep yards, it’s not an unpleasant place to spend the day in, although there is precious little room for anything other than the operator. So long days spent away from the yard can be a hard slog, with no space to carry essential supplies of food and drink, let alone any vital tools.

This slightly cramped feel in the cab is replicated in the positioning of the on-board stereo, which, quirkily, is to the rear right-hand side of the driver’s seating position. It’s not a big issue, but it does leave you wondering if the cab was an afterthought once the design team had put the machine’s vital components together. 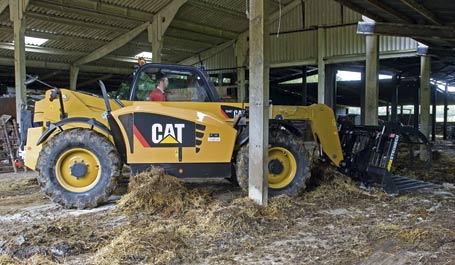 When it comes to the main event, however, the TH407’s working ability, operators shouldn’t be disappointed. With a standard spec of 101hp and an optional upgrade to 126hp, there’s plenty of power under the bonnet, which easily translates into lift capacity and grunt when it comes to getting the machine stuck into a heap of rotting manure.

With FW’s test conducted in a building festooned with stanchions, the TH407’s bulk – 5.15m long to the attachement cradle and 2.4m wide – could have been an issue, particularly when trying to clean out the nooks and crannies such buildings harbour. But, somewhat surprisingly, when equipped with a muck grab there was relatively little difficulty in cleaning out the more tricky areas, with the crab-steering option allowing delicate positioning of the handler in some tight spots.

That said, the machine’s bulk did cause some issues, not least when it came to seeing its furthest corners when operating in tight spaces. This was particularly evident when attempting to gauge the position of the front offside wheel, while visibility to the rear offside was equally difficult, with the substantial boom arm blocking most of the view.

Caterpillar has attempted to overcome the visibility issue with suitable mirrors, but once the boom is raised a shade to a suitable travelling position these are also blocked by the boom. Of particularly little use is the convex mirror fitted to give a wide-angle view of the rear offside of the machine; it simply doesn’t deliver what it tries to.

In truth a sloping engine cover, as favoured by many other manufacturers, would give a far better view of the offside and allow operators an improved grasp of the machine’s extremities. But when it comes to maintenance, the sizeable engine compartment gives plenty of room for servicing and repairs to be carried out.

The extensive amount of machine behind the cab could also be a cause for concern, since being completely aware of the position of the back-end isn’t easy, even with the traditional rear-mounted mirror. This was particularly so on the test model, which had a sizeable lump of steelwork, including the pick-up hitch, projecting beyond the rear wheels.

When it comes to boom and attachment operation, the TH407 performs extremely well, with the boom raising and lowering smoothly and quickly and the attachment’s services easily operated by rolling wheel switches on top of the standard joystick. These are a shade clunky initially, but any novice will find they become second nature after an hour or so and are one of the machine’s real plus points. All controls are combined on the joystick, so even irrergular drivers should have no trouble getting to grips with the system.

The transmission is hydrostatic, the forward and reverse shuttle being operated on a stalk on the steering wheel column. Five forward and three reverse speeds are available by turning the outer sheath of the stalk to the desired position, giving a maximum forward speed of 40kph and a top-end in reverse of 21kph. Both figures are more than adequate for a machine of this stature and bulk, which tips the scales at 7.7t.

Overall, torque is also sufficient, the telehandler only struggling to gain forward momentum when travelling on slippy chalk floors, something no machine is adept at. When challenged with powering its way into a sizeable heap of manure, the TH407 set about its task with workmanlike honesty and gusto.

The TH407 is definitely a machine with a lot going for it, but with one serious flaw: Where it needs to be operated in confined or awkward spaces, the operator’s visibility is significantly impaired, meaning bumps and bangs could be a frequent occurrence.