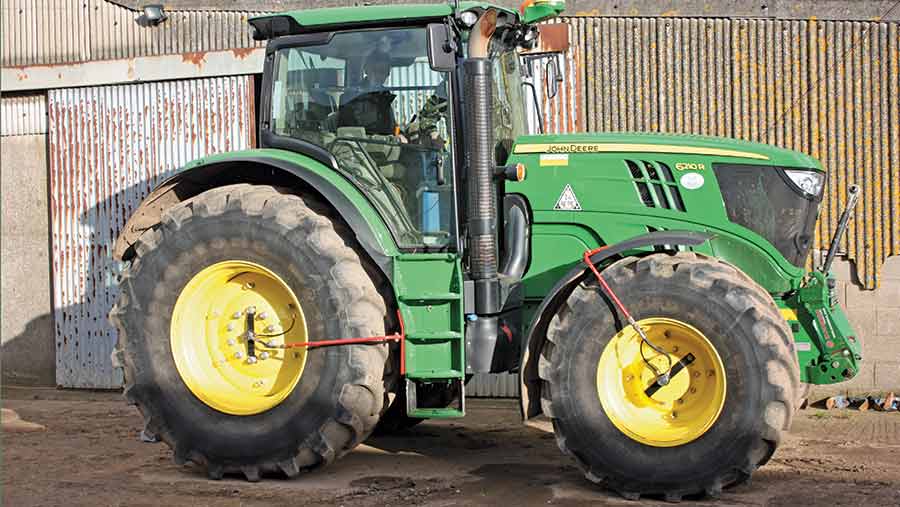 If there is one thing that we can all be sure of in 2016, it is that soil compaction will be an increasing worry for farmers.

However, machines continue to get bigger and heavier – even a relatively run-of-the-mill 160hp tractor can weigh 10-12t and a combine with a full load tips the scales at 50t.

Lugging around that much weight isn’t a problem on the road, but once you pull into the field it’s a different matter. Even with a set of full-size 900mm-wide tyres with the inflation pressures exactly where they should be, the weight on the soil is huge.

And though the latest ultra-wide tyres from the likes of Michelin and Bridgestone are amazingly good at spreading the weight of the tractor on the field and running safely on the road, it’s still a pretty big compromise.

Does it really matter? On a day-to-day basis it’s pretty easy to forget the downsides of all that weight and just get on with the job. However, there are some powerful reasons for giving serious thought to the subject.

So what’s the answer?

Time to talk to someone who knows a bit about the subject. In this case, Nick Constantine and Alan Wattam from East Yorkshire firm TractAir.

TractAir has been around since the mid-1970s and made its name fitting air brakes to tractors. In fact quite a high proportion of the air-braked tractors on UK roads and farms were fitted by the company. The firm has now started bringing in central tyre inflation systems (CTIS) from German company PTG. These are widely used on the Continent but pretty much unheard of in the UK.

While modern tractor tyres do a pretty good job of combining weight-bearing on the field and high speeds on the road, it’s still a major compromise, says TractAir.

For a start, tractors like to be able to travel at 50kph on the road, which means they need high pressure in the tyres – ideally something in the order of 1.6bar (23psi). But once they get in the field, they need to have lower tyre pressure, ideally about 0.8bar (12psi), so that the tyres are supple, spread the weight of the machine and grip well.

However it’s a fair bet that not many farmers have the patience to hang around waiting for each of the tyres to reach the ideal pressure. As a result, most people run at a compromise average pressure.

But the truth is low pressure on the road is bad news for tyres. Tyre lugs wear out quicker than they should, temperatures inside the tyres are higher than optimum and the flexing of sidewalls eventually shortens the life of the tyres themselves. In fact, says TractAir, keeping the tyre pressures at the right level for road work can give a 20% reduction in wear.

Being able to alter tyre pressure from the cab while you’re on the go means you can cut wheelslip and fuel consumption in the field, too. The tractor isn’t constantly trying to get out of its own rut, so fuel consumption should be 15% lower.

Moreover, spreading the weight of the machine over a larger footprint reduces compaction significantly and leads to a claimed 6% improvement in yield.

Lowering tyre pressure in the field reduces wheelslip pretty dramatically as well, points out Mr Wattam. For instance, if you drop your tyre pressure from 22psi to 13psi, you should cut wheelslip from 21% to 16%.

Equally, if you want to keep to a constant 15% slip, then dropping from 22psi down to 13psi potentially gives 35% more traction. That should, in theory at least, let you use a lighter, lower-horsepower tractor for the same job. The benefits from CTIS also apply to trailers, combines, slurry tankers, sprayers and foragers.

I haven’t the time to be inflating and deflating tyres

Standing around in the cold while you put more air in (or let some out) is something only the keenest farmer or tractor driver is going to bother with. Which is where Tract­Air reckons PTG’s kit can come in. Its central tyre inflation system is designed to be relatively simple and moderately cheap.

It is not the first company to offer this sort of technology – Russian armoured vehicles have had them since the 1950s and the forestry sector uses them a lot. Fendt has a system, too.

But TractAir reckons its latest systems are relatively simple and don’t cost a fortune. The clever bit is the rotary valve that allows air to go in and out of the tyre while the wheels are actually turning.

Won’t the pipework catch on things?

Although it can seem that way, the pipes stick out less than 50mm from the tyre sidewall, says Mr Wattam. Even if you did catch a pipe on a hedge or going through a field gateway, it doesn’t mean the tyres will deflate as the valves are one-way types.

The first dealer to sell the new CTIS units is RBM Agricultural, which has six outlets in Yorkshire, Nottinghamshire and Lincolnshire.

Customer service manager Rob Willingham reckons it could well appeal to bigger farmers who want to be able to use the right tyre pressures for both field and road work.

It is a fairly drama-free process. As you leave the farmyard and head off on the road, you press the road button on the screen and the system pumps up the tyres while you’re moving. As you turn into the field you press another button that lowers the pressure on all four wheels to a preset level. Aside from the presets, pressures can be altered 0.1bar (or 1psi) at a time, giving fine control for any conditions.

A control box under the tractor’s cab sends a signal to the system’s brain to let air out of the tyres. The process happens in reverse when you go back on the road, using pressure from the air-brake reservoir to inflate the tyres. All you hear is a slight hiss as the air goes in and out of the tyres.

That also means in most situations there’s no need to use dual wheels.

For all these systems, the tractor has to have an on-board compressor, but that’s fast becoming the norm for all medium and large tractors anyway.

Airbox Mobile (£590) is the simplest and cheapest set-up. Two tyres can be inflated or deflated at the same time but you need to get out of the cab to connect a coupling at the back of the tractor.

Airbox Drive (£2,300-£3,700) is the firm’s pukka set-up. It gives you an RDS control box in the cab that lets you change tyre pressure on the move. You can have a dedicated control box or integrate it with your existing Isobus set-up.

There is still some external pipework but it can be quickly stowed away if you’re working in very narrow spaces.

Airbox Radial (£3,200-£5,000) uses the same technology but is for row-crop axles and removes the need for external pipework at the rear.

Can I fit the system myself?

While most people will probably get TractAir to fit the system (via a network of dealers), you can do it yourself, says Mr Constantine. The process takes six to eight hours.