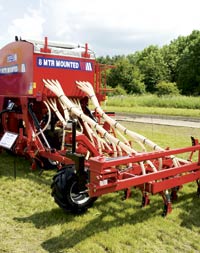 Although offered before by the company, it marks a push towards larger models, says Weaving. This one has taper bearings on the folding arms, a 550mm packer, twin-cam clutches and eradicators as an option. It costs £14,800.

Joining the Subdisc cultivator range were two 4 and 5m folding versions. They feature two rows of low-draft tines with knock-on points, with nine legs on the 4m version and 11 legs on the 5m. They’re followed by a single row of scalloped discs and a Guttler packer roll to the rear.

The 8m mounted C-drill, which is based on the Weaving tine coulter system, is built to order and features electronic monitoring, RDS tramline system (which counts the tramlines) and hydraulic markers. It costs about £24,600.