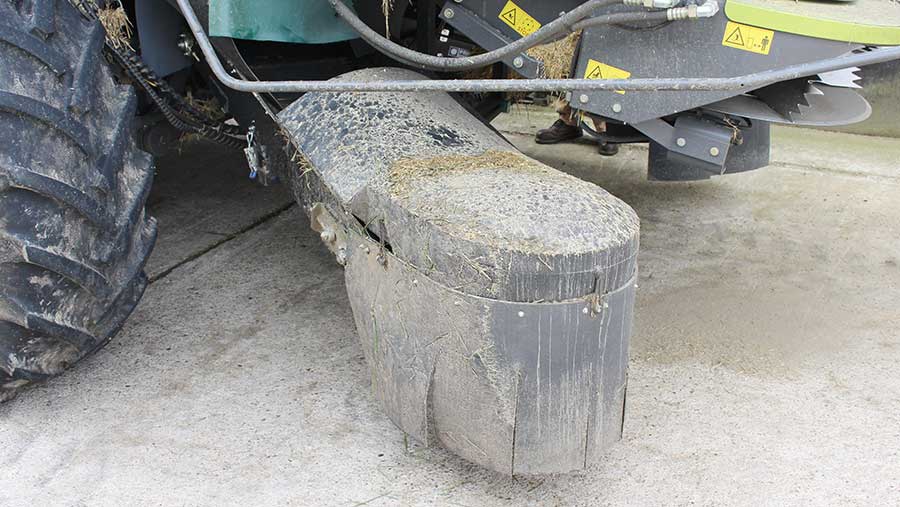 A handy tool that collects the chaff as it is flung out of the combine’s back end has been trialled this year by an Essex arable farmer looking for extra weaponry in his battle against grassweeds.

Farm manager Jeremy Durrant has been fine-tuning his system since taking the reins at Essex arable farm EW Davies back in 2009, where the old plough-based rotation was returning plateauing yields with an increasing reliance on chemicals.

When the farmed area doubled to 1,250ha soon after his arrival, he had to rethink how he covered the vast acreage that stretches from Thaxted in north Essex to a block of land down the A10 at Waltham Abbey – a two-hour trek in the combine.

After flirting with min-till for a few years, he decided to take the plunge down the controlled traffic farming (CTF) route in 2011.

The plough was sold and the 6m drill and cultivator both doubled in size to new 12m machines.

The sprayer already ran a 36m boom while the Claas Lexion 780 combine with a 12m Macdon header arrived in 2014 and completed his CTF-friendly fleet.

The two following years gave very encouraging yield increases and put to bed any lingering concerns he had.

However, as with most farmers across the country, it didn’t completely solve his continual war against grassweeds.

Convinced the answer didn’t lie at the bottom of a can or bottle, he started his search for other methods to take the sting out of weed seeds’ virility. 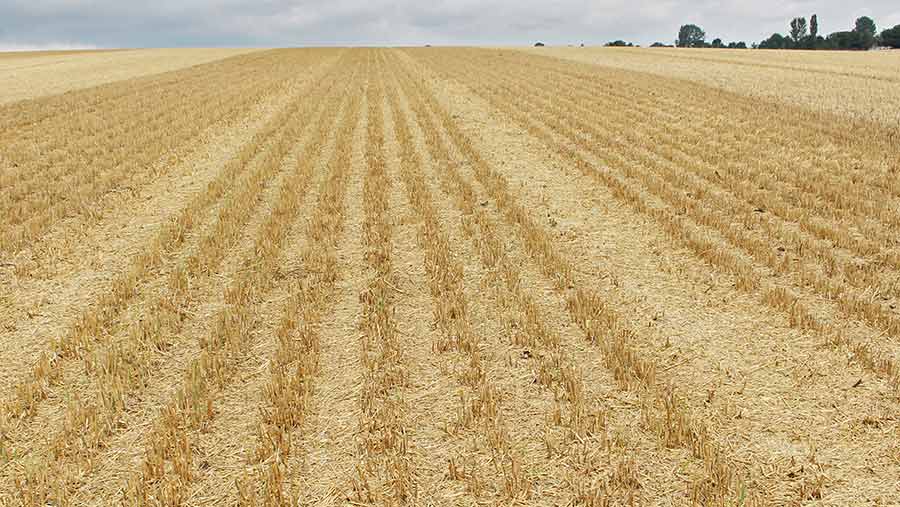 The chaff lines in the field

That’s when he came across the Chaff Deck made by Primary Sales Australia.

He spent hours trawling the web for other options, but kept coming back to the Aussie bolt-on attachment and was sure it could complement his new system.

More than 250 Chaff Decks have been sold in Australia since manufacturing started in 2015 as a solution to Australia’s colossal ryegrass problem, with 98% of the troublesome weed resistant to herbicides.

Chaff carts, combines towing balers and windrow burning are all common sights in Australia as a means of getting on top of ryegrass, because it usually holds on to its seeds until harvest.

So instead of spreading this viable seed as normal through the combine’s chaff spreader, the invention is designed to keep it confined to a specific area.

“After winter drilling, we can see the exact patch on the edge of a field where the combine has been blown down during harvest and the weed seeds have germinated”, says Mr Durrant. 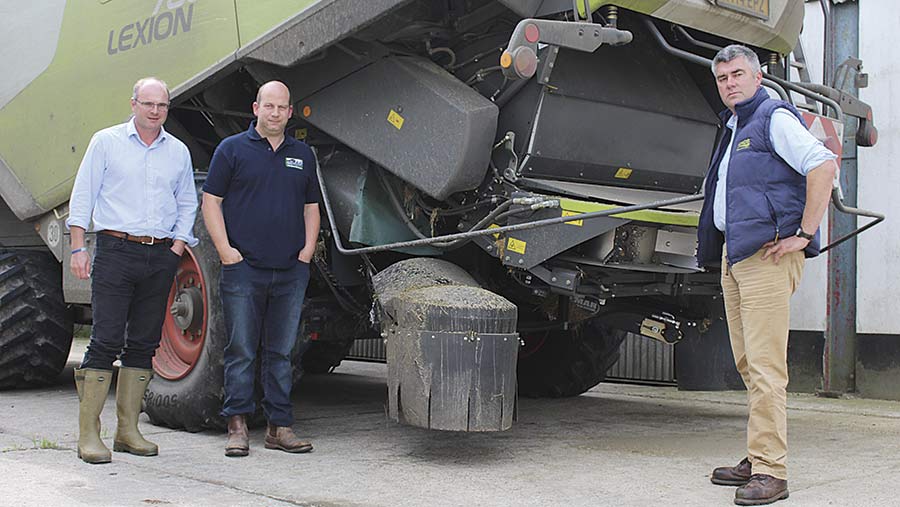 “Even if the Chaff Deck was to give us slightly more control of grassweeds, it has to be worth a go”.

After floating the idea of a trial to a few potential UK importers and agrochemical companies and receiving minimal interest, Mr Durrant got in touch with the Australian manufacturer, who agreed to ship a unit to the UK and hop on a plane to come and set it up free of charge. Frontier and AHDB have since got involved with the trial, too.

“Evidence suggests at least 90% of brome and ryegrass, along with 30-50% of blackgrass seeds, are still on the ear at harvest, while the increase in spring cropping is causing huge financial implications for both farmers and suppliers,” says James Moldon, head of technical services at Frontier Agriculture.

“That financial burden isn’t just for the extra workload in the spring but also the reduced incomes when compared with winter wheat crops. We feel an obligation to support farmers in finding additional ways to get on top of grassweeds alongside chemical methods”.

The aim of the machine it to prevent chaff being mashed up in the chopper and thrown out by the spreaders. Instead, it is placed on the 12m CTF wheelings behind the combine, leaving two raised lines of chaff.

See the Chaff Deck in action in the video and read more about how it works below.

Fitting it requires the removal of the chaff spreaders. The two conveyors, one for each wheel, bolt into the empty space. There are two hydraulically driven motors – one for each conveyor – which plug straight into the fittings vacated by the spreader so there is no extra pipework needed.

Once the combine’s guts are running, the conveyors start to move with the speed set from the combine’s in-cab screen. Sensors on each side alert the driver in the cab if either belt stops, and the company says it requires no extra horsepower to run the deck.

“The conveyors are only running at half speed and, due to their width, full speed is unlikely to ever be used. Now it’s on, we forget its even there as it sits inside the combine’s turning circle”, says Mr Durrant.

“We rarely row up straw but had to recently and, due to the swathing mechanism on a Lexion, we had to drop the deck off as the spreaders wouldn’t fold. However, the job only took 15 minutes”.

A few modifications have also been needed since its arrival. Aussie wheelings are at 3m centres, which is too wide for the UK, so each conveyor has been nudged in by 20mm to make sure that the chaff falls into Mr Durrant’s 2.84m system.

Some rigid skirts were attached to the bottom of the conveyors to prevent the chaff from blowing around but, with the undulating UK land, these have been made more flexible with extra cuts to prevent them ripping off.

A CTF systems isn’t required to use the Chaff Deck, but maintaining the same combining lines year on year is paramount and will keep bringing the live seeds to the same place, reducing the spread across the whole field.

When seeing a stubble field for the first time with the Chaff Deck working, it’s clear what effect it has had. The 12m wheel bouts from the combine are far more visible as the chaff and weed seeds are accumulated in two tracks with swathes of bare soil over the rest of the field.

This could have extra benefits when getting an early flush of weeds for spraying before drilling because the seeds that have fallen before harvest have extra light due to the reduced chaff to get an early chit.

It’s also worth remembering that Australian laws are pretty flexible when compared with the UK, particularly when it comes to burning the chaff lines, which farmers over there believe is one of the best ways to kill seeds before germination.

We don’t have such luxuries here, so other options have to be explored. Clearly on the tramline, the footprint of the sprayer going through multiple time a year should be enough to keep the weeds at bay. But what about the two bouts in-between?

Indications from the early-harvested barley and wheat fields left uncultivated suggest the chaff has started to break down and compost in places, with very little signs of life.

The hope is that the CTF tramlines with be a hostile environment with huge competition between seedlings, so the weeds should struggle and be outcompeted by the drilled crop.

Is this attachment going to cure the countrywide grassweed problem and allow a blanket return to winter cropping next year? Probably not, but Mr Durrant has been pleased with its performance alongside his other blackgrass control methods of soil management, crop rotations and plant protection products.

“The benefits will be seen year on year. By gathering the viable weed seeds to a central point, it will be easier to control these smaller, more populated areas, allowing the rest of the field to outcompete what weed seeds remain. Coupled with the existing chemical and cultural measures already in place, it’s an extra tool in our armoury”.

Frontier says there should be some evidence of success based on plant counts before and after harvest. If all goes to plan, there will be some more trials on different sites during the 2018 harvest.

The company also claims there is a lot of grower interest but, as with anything new, most farmers don’t want to be the first to take the plunge.

At £9,500-£12,500 depending on your combine brand and excluding shipping, the price seems pretty reasonable too.