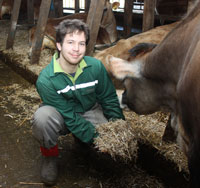 Bedding cows on rape and wheat straw that’s been chopped on the baler is a great way to cut down on haulage and dust, as one Somerset farmer explained to David Cousins.

No-one could complain about a lack of variety when it comes to choosing bedding material for cows to lie on in their cubicles. The choice ranges from straw to sawdust, shavings to sand, and waste paper to rubber pillows.

But these materials all have their drawbacks, whether it’s the cost of sawdust, the lagoon-clogging qualities of sand or the sheer dustiness of straw that’s chopped and blown into cubicles.

For Somerset father-and-son dairy and arable farmers Chris and Jon Bult, it was the eye-watering cost of sawdust that made them look at alternatives. They have 150 black and whites and Jerseys at Collum Farm, Kewstoke, near Weston-Super-Mare, but are planning to build that up to 300 head this year.

“The shavings don’t break down easily, either. You can inject them with a slurry injector, but if you use a splashplate they just form a mat over the grass.”

They weren’t too enthusiastic about using a chopper-blower to blast straw into the cubicles, either. Not only does it produce a lot of dust, but stones picked up by the baler wear the cubicle mats. And then there’s the double handling.

“The trouble with the conventional way of doing it is that you have put the straw first through a baler and then through a chopper in the livestock shed,” he says. “That doesn’t make sense.”

The answer for the Bults came in the form of a Claas Quadrant 3200, with its FineCut chopping mechanism. This uses a set of 49 knives to chop wheat straw to 75mm (3in) and rape straw (which is more brittle) down to just 25mm (1in) lengths. Theirs is the first 3200 FineCut in the UK, though there are reckoned to be more than 100 working in Germany.

Though the baler cost £85,000, the Bults believe the benefits more than make up for that in reduced haulage and easier handling. Each chopped wheat straw bale weighs 360kg compared to 300kg for the unchopped version. The difference is even more marked in rape, with the chopped bale weighing 300kg compared to 200kg without the chopper.

That means fewer trips to get the bales back from the field and no need to chop it again in the livestock shed. Instead, the chopped straw is relatively gently dispensed into the cubicles by a Garnett Ag Dispenser. The Bults favour the rape straw, which they say makes a more absorbent bedding than wheat.

It has cut bedding costs at Collum Farm sharply too. Instead of 13 bags a day of shavings (costing £45-£50/day), they say they now use half to three-quarters of a bale (costing £7/day). That includes a cost of £5 to make the bale.

Any drawbacks? The farm’s 180hp Fendt 818 does have to go slightly slower than it would on a standard baler. And, while the bales keep their structure well (despite the short straw), spiking them too many times can make them start to break up.

However, the Bults sold more than half of the 450 rape bales and 500 wheat bales they made last year, and users were very pleased with them. And their vet also recommended they put 0.5kg a day of the chopped rape straw in the cows’ rations to improve rumen function.