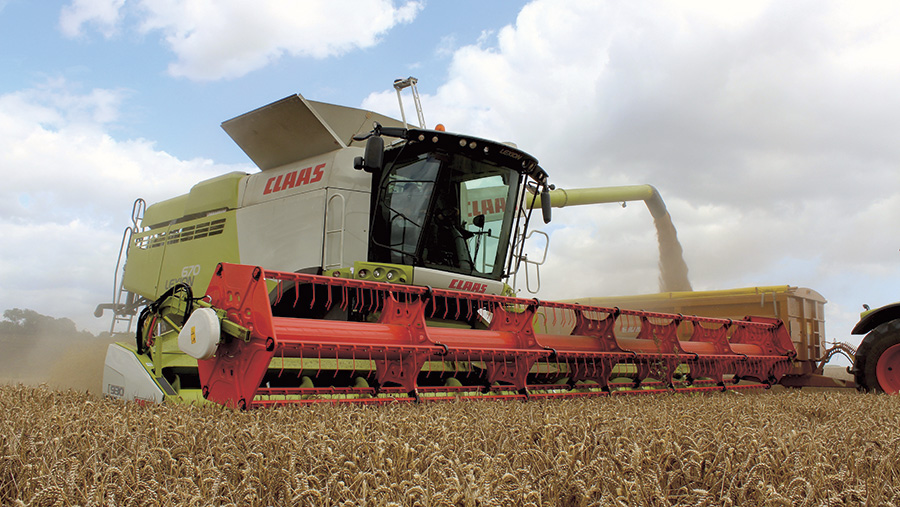 Claas has rolled out a raft of updates that add extra sophistication to its 600-series Lexion combines.

Market projections suggest that harvester sales have tumbled to their second-lowest point in more than 20 years and, although Claas expects things to settle about the 500-unit-a-year mark, they’re likely to remain a long way off 2012’s dizzy peak of 1,203 machines.

Despite the slow sales, the German maker has continued its policy of chopping out the old Caterpillar oil-burners in favour of Mercedes MTU units.

Though the power figures aren’t wildly different from before, Claas says torque has increased and the machines should be better able to cope with heavy-going crops.

They include the variable-speed cooling system, which automatically adjusts the fan’s cooling capacity according to engine temperature to save up to 20hp.

The radiator draws cool, clean air from above the combine, before driving it downwards into the engine bay and out through grilles that form a curtain of air to prevent dust rising and dirtying the engine bay.

Several automatic systems have also been added as options on the 600-series.

The auto crop-flow control uses sensors to monitor engine RPM, drum speed and the straw chopper to alert the operator to any potential blockages.

Slope control adjusts the fan speed to compensate for hilly ground to minimise losses, while the Cemos cleaning system uses sensors to keep an eye on crop cleanliness and adjusts the opening of the upper and lower sieves accordingly.

The larger, six-walker 650, 660 and 670 models have also been given a new straw chopper and spreader system as operators running on controlled-traffic systems look for a more consistent spread.

The chopper drum is 5cm bigger to improve crop flow and chop-length consistency, and it can now be engaged from the cab, while the spreader is driven mechanically to keep a more consistent throw of material.

Unloading time has also been increased on the biggest two models from 110-litres/sec to 130-litre/sec, too.

Elsewhere, the hybrid 700TT-series Lexions are now available with a folding 7XL unloading auger designed to fit with a 12m controlled-traffic farming system.

The biggest cutterbars have been updated with integrated filler plates that make it easier to retract and extend the table.

Side knives can be fitted and removed without any tools, thanks to two flat-sealing couplers that automatically activate the hydraulic pump and restrict table adjustment to avoid the aide knives clashing with the reel. 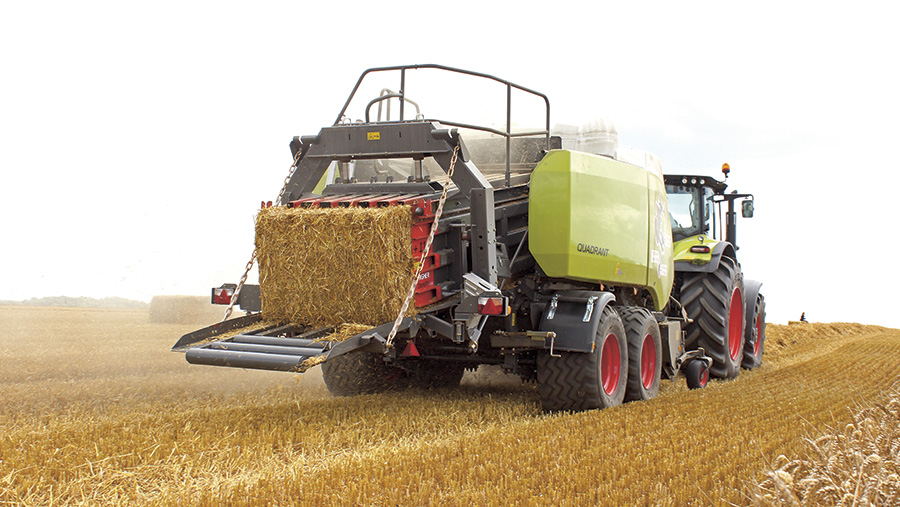 Claas has redesigned its knotter system with a new, wider opening bill hook, strong guide finger and bigger clamping plate, which it hopes will allow more tensile strain on the string and improve knot consistency.

The hydraulically powered cleaning system has also been upgraded with a more accurate jet of air to keep the string-tiers clean.

The balers are available with a system that maintains the target chamber pressure and consistent bale weight even as crop conditions change by monitoring the tension on the string and the strain on the drivelines.

Sensors fitted to all six knotters are also able to detect any stresses and send an alert to the control box should there be any broken strings or missed knots.

All three models come with a 2.35m-wide hydraulically suspended pick-up with a double roller crop press and a feeding auger as standard.

The hydraulic drive allows the operator to match the speed of the pick-up to the crop and also mean the auger and crop press can be reversed if there is a blockage.

Claas made its Fleet View app available earlier this year, which allows combine and tractor/trailer operators to monitor things such as trailer location, how full the combine grain tank is and how much of the field has been covered.

A licence for one combine and five tractors costs £250/year.