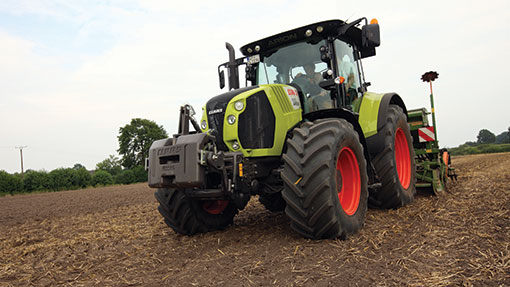 Claas’ Arion turned out to be a pretty good all-rounder. The cab was comfortable and well thought out, and the gearbox performed well in tests. We found some of the electronic functions confusing, though, and the lack of a touch screen was a tad old-school. Rear lift capacity was a bit weak, too. Base price: £98,680

Hopping up three steps gets you into the Arion’s spacious five-pillar cabin. This was the second largest on test with ample accommodation for bigger-boned operators and their companions.

Storage was also a strong point for the Arion. A bucket-like chiller under the passenger seat means there’s plenty of space for pop bottles and pasties and the backrest folds flat so there’s somewhere to rest a coffee cup. There’s also a handy removable box perched on top of the left wheel arch.

Most of the main controls are grouped on the sizable right-hand armrest. This is littered with buttons including several F-keys that can be programmed to carry out specific functions.

At the centre of the armrest sits Claas’ mouse-like Cmotion controller. This deals with transmission changes, but also has buttons for linkage control, spools, headland management and guidance. There are also two programmable F-keys. Considering it started life as a Lexion combine controller, it’s surprisingly intuitive to use.

The front of the armrest is home to the colour Cebis screen. This serves up information in a format that’s pretty easy to navigate, but with no touch screen facility it’s a tad archaic. It also took an achingly long 35 seconds to boot up from cold (similar to the Deutz and Valtra) and when it did we found the resolution wasn’t the best.

Visibility was pretty good and the small b-pillar on the left did little to hinder the view. The arched rear window gave good rear visibility, but the forward position of the cab meant the hitch was hard to see.

Lighting was also impressive, partly because the test tractor was fitted with a set of pricey xenon lights. But even the standard lighting package includes 14 work lights. The climate control system also did a decent job of blasting air around the cabin.

Overall, build quality was OK and the dark grey plastics make it look classier than your average cabin.

The sprung independent Carraro front suspension and mechanical cab suspension made for a pretty good ride.

The Arion also has good brakes and neat handbrake. Cab noise was recorded at 75.6 dBa during work, which was the second loudest on test.

Nestling under under the Claas’ shark-like bonnet is a John Deere 4-cylinder engine. This uses exhaust gas recirculation and a diesel particulate filter to control emissions, meaning there’s no need for AdBlue.

Unlike the similar-engined John Deere, the Arion had no boost and delivered a maximum power of 150hp at the pto shaft.

Cooling is handled by Claas’ own hinged system that makes cleaning out duties more straightforward. When it came to fuel consumption, the Claas was bang on the test group average with a specific fuel consumption of 242g/kWh.

In the DLG six-point fuel consumption test the Arion scored 257g/kWh, putting it just behind the Fendt and a good bit better than the group average of 269g/kWh when including AdBlue.

Back in the cab, there are two engine speed memory buttons that are very simple to use. These can be set in the Cebis screen or by pressing and holding one of the buttons while at the desired engine speed. The small, fiddly hand throttle was less impressive and we found it awkward to get our hands on.

Claas’ Hexashift semi-powershift box was a solid performer in our tests. Its four ranges (A-D) with six powershift steps in each were easy to notch through using the Cmotion lever and the fully automatic mode was pretty slick, too.

In manual mode, powershift stages are controlled by nudging the Cmotion lever backwards and forwards. Range changes are then handled by punching the lever completely forwards or backwards past the powershift change point.

There are then two auto modes – transport mode allows the box to shift automatically through ranges C, D and all their powershift stages. The range change between C and D range was fairly swift, without too long a break in drive.

Field mode, meanwhile, restricts auto shifting to powershift stages only, leaving the driver to control ranges using the mouse. The overlap between ranges is also pretty good, particularly between four and 12 kph. 

Considering there are so many buttons on the Cmotion lever, it’s surprising there are no buttons for direction changes. Instead, drivers must use the left-hand forward/reverse lever mounted on the steering column.

The amount of oil available at two valves was 113-litres/min, which was significantly lower than the group’s 137-litres/min average. The 32-litres of removable oil was also below average.

The Arion’s 4×4 switch was also a bit confusing with just one button for auto and permanent modes. A quick press puts it on permanent and pressing and holding for two seconds puts it into auto. This disengages above 20kph or when the rear links are lifted. There’s no sensor for steering angle, though.

Despite its neat proportions the Arion’s 12m turning circle was one of the poorest on test. It took three turns of the steering wheel to go from lock to lock, which wasn’t too bad.

Total unladen weight was 7.1t and gross weight was 11t, leaving a 3.9t payload. The permissible rear axle load was limited to 6.9 tonnes, though.

From a user point of view, the Arion had one of the better hydraulic system setups. But a score of just 5.7t on the rear lift test gave it the lowest average lifting power.

The main rear linkage control is positioned on a cross button on the Cmotion lever. This offers drivers a quick lift and drop function as well as two-stage proportional control. The dial for adjusting working depth was one of the best on test.

It’s also nice to have a separate set of lift and lower switches mounted near the rear window for hitching up duties.

A neat, integrated front hitch helps make up for the poor lift at the rear. This has electric switches for lift and drop as well as the top link and a separate spool. There’s also a handy low-pressure return socket for implements such as bucket brushes.

The pto was another of the Arion’s strong points. The four pto speeds (540, 540e, 1,000 and 1,000e) were easily switched using a bank of chunky buttons on the right-hand rear pillar. The speeds did take a bit to long to change, though.

Testers also weren’t that keen on the positioning of the main pto switch, which sits in a dip at the back of the main switch area.

The Arion had a very simple pto automation system that clicked in and out when the pto was raised and lowered – our only real complaint was that the button was tucked out of the way at the back of the control arm.

On the rear fenders Claas has fitted separate buttons for switching the pto on and stopping it in an emergency.