While many UK farmers are still struggling to get their harvest in at all, a new world harvesting record of 532t harvested in eight hours was set on Tuesday of this week (16 September) by a tracked Claas Lexion 580+TT combine working in .

The new record beats the previous one of 451.2t set earlier this summer by a New Holland CR9090, which was passed after 6 hours and 43 minutes.

Equipped with a 10.5m cutterbar, the Lexion achieved an average throughput of 66.5t/hr over the eight-hour duration, with a recorded peak of 91t/hr at 6.39pm.

On average, the combine consumed 1.35 litres of fuel per tonne harvested – equivalent to 15litres/ha. 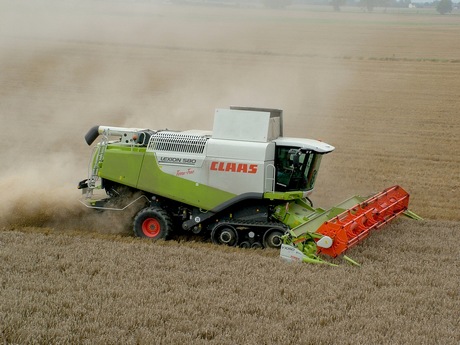 The record attempt was organised by Nottinghamshire contract farming company Farmeco , who had previously set an unofficial record of 1000t in a day in 2003, and took place on Kevin Yates’s Winterquay Farms at Heckington.

Authenticated by Carlos Martinez from Guinness World Records and assisted by independent mechanisation expert Bill Basford, the record involved a 200ha block of Alchemy winter wheat, in conditions that were grey and overcast.

All machine configurations and settings, including the crop losses and engine installation, were verified by Carlos Martinez and Bill Basford, and the tonnage was checked over a weighbridge. 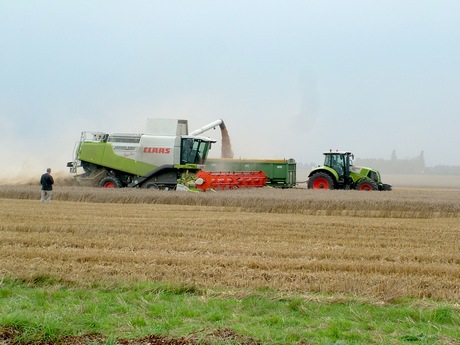 Over the eight-hour period, a total of 47.7ha (117.8acres) was harvested from six fields in three separate blocks, with yields averaging just over 11t/ha and peaks of over 12t/ha.

Moisture content was 17.4% when the run started at midday and dropped to 16.5% by late afternoon. Bill Basford also monitored cracked grains to ensure they remained at an acceptable level, and measured grain loss as being no more than 0.5%.

The crop height measured between 61cm and 63.5cm, and all the straw was chopped and spread with the chaff. 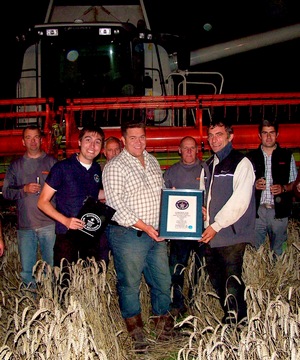 “When I saw the reports of the previous record, I knew it could be beaten, as we have the crops in the and the machinery to do it. There was never any doubt in my mind,” said Keith Challen of Farmeco.

“This is the latest we have harvested in 20 years, and after a very difficult harvest, it is nice to finish on a high and make harvest 2008 memorable for the right reason!”