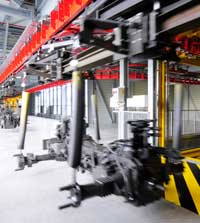 Claas has officially opened its new ultra-modern paintwork line at its factory in Le Mans, France.

It has been installed in a building adjoining the assembly plant and covers 2520sq m.

An overhead tunnel with a conveyor system means that units of up to 8t can be moved from the main building to the new parts painting building.

The production capacity is 75 tractors/team but, by adjusting the conveyor system, this could easily be brought up to 100 tractors/team, says the company.

Automation of the painting process underneath the lower section of the tractor will allow working conditions to be improved. It will also ensure better control of the paintwork and paint consumption, says the company.