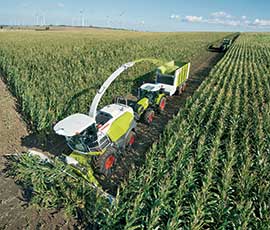 Forage harvester fanatics have been eagerly awaiting the launch of Claas’ new 800-series chopper and after months of anticipation it’s finally broken cover.

Sporting curvy metal body panels, an upgraded cab and slicker controls, the new 800s bear more than a passing resemblance to their bigger 900-series siblings. But strip back the layers and the new models have pretty similar genetics to their predecessors.

Buyers of the 860 and 870 machines will also get the option of adding Claas’ Dynamic Power system. Previously only available on the 900-series machines, this adjusts engine power output according to how much crop is going through. Adding this to the 598hp 870 or 510hp 860 model will allow power to drop as low as 272hp in lighter crops, shaving up to 10% off the diesel bill.

Up top, operators are treated to a bigger cab that’s trickled down from the 900-series. This is both deeper and wider than the old one and it’s supposedly a lot quieter too.

The old black-and-white screen has also been ditched in favour of a colour Cebis one and the gear change is now electric rather than manual. Drivers can also now set an alarm that reminds them when they need to sharpen the knives or adjust the shearbar,

Chrome junkies will be pleased to hear that a gleaming set of air horns is now on the options list, too.

With the new models Claas has spent a great deal of time making life easier for the man with the spanners. The large one-piece side panels open wide for day-to-day fettling and for bigger jobs the right one swings open, exposing the whole side of the machine.

Due to the new panel design there’s more room for hauling the corn cracker in and out, too. It’s also now possible to squeeze a bigger multi-crop corn cracker from the 900-series into the 870.

The front end of the forager has had a couple of notable upgrades. A quick-coupler has been added to make header changes faster and there have been some bodywork changes to make accelerator removal more straightforward.

One of the criticisms with the older 800-series machines was that the additive pump was only man enough to apply 1 litre/t. Claas has addressed the problem by adding a more powerful pump so that rates of 2 litres/t can now be applied.

Hydraulic power is also better than before and a new main drive brake has been added to improve safety. This stops the chopper in a couple of seconds rather than letting it wind down gradually.

Disguised pre-production 800-series machines have already been working in the UK and production models will be available for next season.

Changes to the biggest 4500 and 5000 models are fairly minor, but the smallest 3800 has had a complete overhaul.

This has now been rebadged as the 4000 and it sits on the same chassis as its bigger siblings. This means it’s longer and stronger than before and it can be fitted with 2.15m tyres.

There have been big changes in the looks department, too. The flat, understated bonnet has been replaced with a bulbous, angry-looking one and the distinctive chrome exhaust stack has been removed from its perch up front.

This is now tucked neatly behind a plastic guard on the right side with only the tip on show. It’s less of a statement, but apparently it cuts noise levels considerably and it’s not going to get snapped off.

Under the bonnet, the old Cat engine has been dropped in favour of Mercedes power. With 485hp on tap, the new 10.6-litre block has a 50hp advantage over the old one. Torque has increased massively, too. In Cat’s reign there was 1,600Nm available and this has increased to 2,100Nm with Mercedes.

The new engine has also been tuned to deliver max power at just 1,700rpm. Claas says this means most operations can be carried out at low engine speeds to save fuel.

As before, buyers have three different Xerion models to choose from. The Trac is the most basic model and this is designed for single direction travel.

The Trac VC, meanwhile, comes with a hydraulically swivelling cab that means it can switch between forwards and reverse drive modes in a matter of seconds. This also comes with the maker’s Eccom 45 transmission as standard, which means it can travel at 50kph in both directions.

The Saddle Tack is the final option. This has a forward-mounted cab that gives a large load area for carrying tankers and spreaders.

Arion gets a CVT transmission

Engineers at Claas’ Paderborn factory have been busy developing a new infinitely variable transmission for the maker’s mid-range Arion tractors.

The new CMATIC transmission will be available in all Arion tractors from the smallest four-cylinder 530 to the range-topping, six-cylinder, 650.

From a driver’s point of view it will seem pretty similar to most CVT-type transmissions. Three driving modes can be selected – pedal, stick and manual.

Pedal and stick modes are pretty much the same and allow the operator to control forward speed while the tractor takes care of engine revs and gear changes. Manual mode, meanwhile, puts the foot throttle in charge of revs, leaving the CMotion controller to tackle gear ratios.

But unlike some other transmissions of this type there is no manual range change. This means you can go from 0-50kph on the road or in the field without having to press any buttons.

Claas says this is thanks to a stepped planetary gearset that allows the box to flick between its two ranges automatically without any break in tractive power.