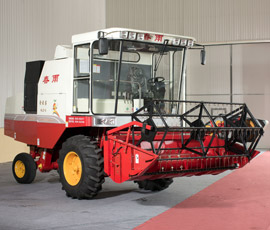 German maker Claas is the latest European company to strengthen its connections with China by buying local harvester maker Shandong Jinyee. The firm, which already has plants in Russian and India, says it plans to produce harvesters aimed at the Chinese market.

The mechanisation of agriculture in China is developing rapidly, driven by the changing demands for food, greater consumption of meat and a rising population.

Jinyee currently produces harvesters for the maize and wheat harvest at two sites in Gaomi and Daqing. Each of the plants is right in the heart of a main agricultural region – one in central China and the other in the north-east of the country.

Jinyee’s headquarters are in the city of Gaomi. Its 22ha plant is roughly half the size of Claas’s HQ in Harsewinkel in Germany.

In 2012, Jinyee, which was founded in 1958, had sales of about €70m. It currently employs more than 1,000 employees and has a comprehensive sales and service network in central and northern China.