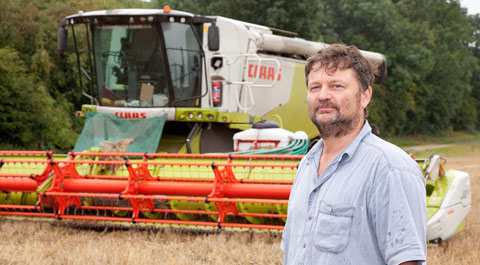 John and Tom Hawthorne are one of the first in the country to run the new Lexion flagship 770, equipped with a 40ft Vario header. Emily Padfield went to see how it measured up

The Hawthornes are no strangers to Lexion combines. Having changed from running Deutz-Fahr eight-walker machines in 2002, the first Claas  opted for was a 480 Evolution.

Their two-year replacement policy meant a quick succession of models – in 2004 they took delivery of the first 580 on tracks and in 2006 this was replaced with a 600 equipped with a 30ft Vario header.

In 2008, they increased the header size to 35ft but stuck with another 600. “We’ve been lucky enough to grow our acreage in line with the new models Claas has brought out,” explains Mr Hawthorne. Flawborough Farms now owns and contract farms a total of 1800ha (4500 acres) of wheat, OSR and beans.

The cab on the new 770 is considerably quieter, with more glass and better all-round visibility, says Mr Hawthorne. But although the cab is bigger, there are disadvantages. “Because they’ve extended the skyline, the sun kills your vision in the evening. And ventilation isn’t nearly as good. You used to get out to check something and feel physically cold when you got back in. Now, it’s not really climate control, more like regular aircon.”

CEBIS-on-lexion-770Claas has fitted a prototype mouse control instead of the familiar Lexion joystick design, something Mr Hawthorne is particularly impressed with. “It didn’t take long to get used to and it’s a lot more intuitive than a regular joystick. I would say that the unloading auger button needs to be a bit more pronounced though.”

The new running software, CEBIS 2, is far easier to navigate thanks to a hot key on the armrest (above right). “Although it takes a while to get used to, it’s straightforward once you’ve got the hang of it,” says Mr Hawthorne.

A new CEMOS box (below right) now houses all the steering functions, but according to Mr Hawthorne (who’s been used to TopCon kit) Claas’s system seems a little old-fashioned. “When using the new autosteer, you have to almost put yourself on the line before it will register, rather than finding itself.”

CEMOS-on-lexion-770A new function that he does like is CEMOS’s ability to show you what settings can be improved to get better performance from your combine, whether it’s in terms of sample or crop flow. It’s not just designed for the inexperienced driver, either. “It continually tries to tweak the settings, and whereas in the middle of the day you would do this, you probably wouldn’t at 11pm at night.”

Updates to the cruise control function have also been met with enthusiasm. “Before, you could really only use cruise control on the lighter, easier-going crops, but now it’s useful all the time, even in green rape.” The function can now be linked to losses, too.

Despite sharing the same engine, the new 770 does appear to have more horsepower, he says, as none of it is taken to power the hydraulics. In fact, the new 770 is running at the same operating speed as the 600 with the bigger header. “I reckon we’re doing about 6ha/hr now, where we were doing 5.2ha/hr.”

“Although we got on well with the 10.5m header, the 12m is phenomenal. On the older model, you used to see the crop queuing before it would feed into the intake, now with a bigger auger there’s no delay.

“We’ve also noticed a reduction in fuel use, 16 litres/ha rather than 20 litres/ha with the older machine.” Because they chop most of the straw, Mr Hawthorne opted for tungsten blades which, despite costing 20% more, are far harder wearing. “We’re still on the original blades, not even turning them after the rape, and they’ll cope easily for the rest of the season.”