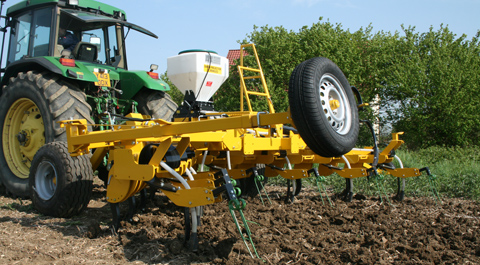 Invented by Suffolk farmer Jeff Claydon, the Claydon drill has become one of the leading UK strip-till drills over the past 10 years.

It was originally designed to cut the time and cost involved in establishing crops on his heavy clay soils. The tine drill cultivates only the soil immediately around the seeding and rooting zones, placing the seed in cultivated bands but leaving the soil between rows undisturbed. This conserves moisture and leaves soils intact to preserve structure and increase worm activity.

How does the Claydon differ from other direct drills?

Most direct drills use a disc to cut a slit into which seed is placed. However, this can cause compaction below the seed from the leading disc, explains Mr Claydon, which can hinder drainage and hamper root development.

The Claydon drill uses one tungsten-tipped tine to break the soil and one winged A-blade to lift and create a Y-shaped cultivated band. A choice of seeding boots lays seed in an 18cm-wide slot.

“But, like any establishment method, different conditions require adjustments to be made and to a certain extent, we’re all still learning,” said Mr Claydon to farmers at the open day.

“Don’t set front tines too deep in drier weather,” he explains. “There’s no need to run too deep, as there is less damage and all it will do is bring up clods. “Don’t be afraid to straw harrow after drilling to level clods. Then roll it again.”

“The crucial thing to remember is that when the soil is wet, it’s cold. Bring your drilling date forward – don’t be afraid to go straight in, and don’t wait for conditions to improve.

“It’s nearly always safe to drill rape stubble two to three hours after rain, within reason. Get the straw harrow and disturb the trash and slugs, as chopped straw doesn’t decompose as quickly. On average, about 15% of our land gets straw harrowed, and we quite often harrow it more than once.”

Jeff’s brother Frank drills, on average, about 1,200ha (3,000 acres) a season, and has worked with the company’s V Drill, SR and Hybrid drills over the years, giving advice on how to improve the machines.