Since our first engine was manufactured in 1919, Cummins has powered equipment for the world’s leading manufacturers. Today, around 1 million Cummins engines are in operation in agricultural applications globally. 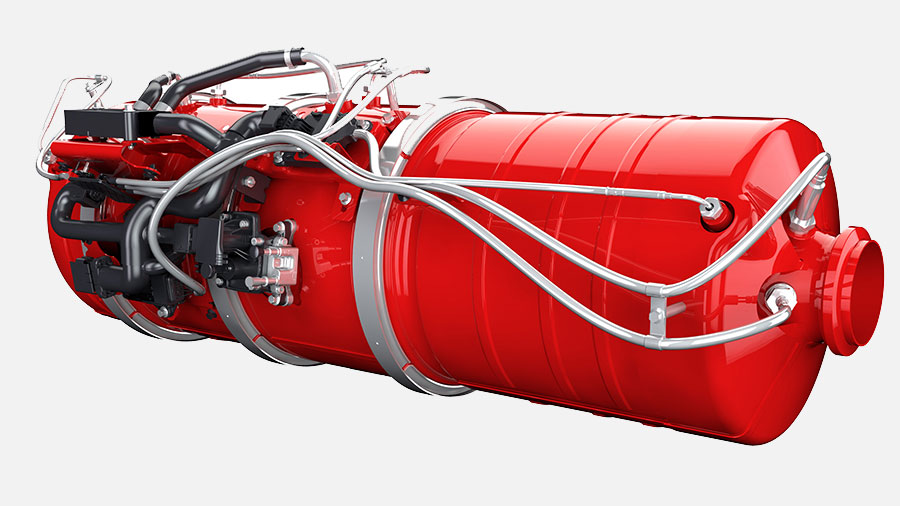 Whether it’s tractors, combine harvesters, sprayers or other self-propelled equipment, there is currently little substitute for diesel power.

But, against a backdrop of global climate change and new emissions legislation, Ann Schmelzer, general manager for agriculture at Cummins explains how engine aftertreatment technology works to make European diesel power the cleanest in the world.

What can often go unnoticed is the fact that the technology involved in diesel combustion has never been cleaner.

EU Stage V legislation, which came into effect in January 2019 and January 2020, tightened oxides of nitrogen (NOx) emissions from off-road machinery as well as, for the first time, setting a strict limit on particulate matter emissions.

Stage V represents a 96% emissions reduction since legislation began in 1999.

Exhaust aftertreatment is technology used to remove emissions from a diesel engine ‘downstream’ of its combustion chamber and there are several options available to engine manufacturers.

Acronyms aside, an internet search for “SCR vs. EGR’ will return more than two million results. Here’s a simple guide to the key technologies used to remove NOx to help you choose what’s best for your engines.

With Exhaust Gas Recirculation (EGR) a percentage (typically 25-35%) of the diesel engine’s exhaust gases are redirected back into the combustion cylinder to help reduce NOx emissions.

This happens as a result of a reduction in oxygen concentration, thereby leading to a lower temperature burn. As NOx is produced when nitrogen and oxygen mix in high temperatures, reducing the temperature reduces NOx production.

EGR is considered to be an easy-to-use system and is fitted on Cummins’ Tier 4 Final engines for the North American market.

Selective catalytic reduction (SCR) is an exhaust aftertreatment technology that injects AdBlue into the hot stream of exhaust gases, where it breaks down into ammonia.

The ammonia is then used by the catalytic convertor to convert NOx into harmless nitrogen gas (N2) and water vapour (H2O).

Any trace amounts of left-over ammonia are broken down into nitrogen using a ‘slip’ catalyst.

SCR is used as part of the innovative Single Module™ aftertreatment on Cummins’ Performance Series engines from 3.8 to 9 litres displacement.

Cummins Single Module™ aftertreatment combines SCR with particulate matter reducing technology and is up to 40% smaller and 20% lighter than its Stage IV predecessor.

No recirculated air enters the engine, so the combustion temperature is optimised.

These benefits have been proven in Cummins’ Stage V 75 – 321 kW engines, which deliver, on average, 10% more power and 20% higher torque than at Stage IV, alongside higher reliability as a result of cleaner combustion.

For particulate matter, there are two main aftertreatment options – a diesel oxidation catalyst and a diesel particulate filter.

A diesel oxidation catalyst (DOC) is a honeycomb-shaped filter with a catalytic coating.

The filter oxidises carbon monoxide, hydrocarbons and particulate matter from the exhaust stream turning them into water and CO2. DOCs are used in conjunction with DPFs, and modern systems support SCR function.

The particulate matter is then burned off through passive or active regeneration. Passive regeneration occurs when the exhaust temperature reaches a specific level, for example a combine harvester operating at rated speed and mid to high load during harvest.

This allows the clean burn-off of soot in the filter. Conversely, in active regeneration fuel is injected automatically when the DPF reaches a set limit to increase the temperature of the exhaust gases and burn off the soot.

No. At Stage V, Cummins pushed the diesel engine onto the next rung of its revolutionary ladder, achieving near-zero emissions levels with Single Module™ aftertreatment while increasing average power and torque across the range.

It’s also not a case of which is best – EGR or SCR, it’s about choosing the right system for the application.

The diversity of agricultural equipment, as well as its international use, introduces factors like running costs, maintenance requirements, fuel consumption and engine commonality across regions.

It’s not always a one-size-fits-all scenario. What we do know is that with Stage V technology, Europe is delivering the world’s cleanest diesel power.

Find out more about Cummins engines and technology