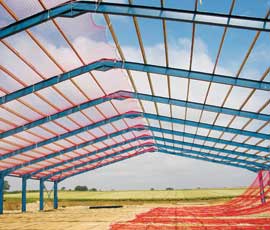 The result of overloading, a design fault or just poor construction? The twisting and buckling of this stanchion may have been avoided if reinforcing metal had been welded between the flanges.

After 1 July 2014 farmers who have buildings erected that are not CE marked could find themselves with no insurance cover, warns Tony Hutchinson (pictured), national secretary for the Rural & Industrial Design & Building Association (RIDBA). 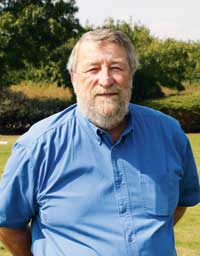 “After that date it will be a criminal offence to supply non-CE-marked frames for the construction of a building,” he says. “As such, it is unlikely insurance companies will pay up for the rebuilding of a collapsed or damaged building where the frame is not CE marked – or for damage to livestock, grain or machinery as a result of the collapse.”

In the winter of 2010-11, when heavy snowfalls were experienced in several parts of the UK, more than 5,000 farm buildings collapsed – mercifully without loss of life. Causes cited for these failures included building age, the weight of the snow which exceeded design loadings of the building, poor design overall, poor construction and use of substandard material.

Clearly, if there is not to be a repeat of the 2010-11 winter collapses, there needs to be some fresh thinking on the job – although it is a sobering thought that there are still countless farm buildings in use that may or may not be capable of withstanding heavy snow loads or high winds.

It’s worth noting too that farm buildings usually have a minimum 20-year design life, which is a way of limiting design standards and material costs. To build with a design life of 100 years, the construction would need to be more robust and the steel and fabrication stronger and more durable. But the costs would be higher.

The sheer number of collapsed buildings has highlighted the need for greater regulation and quality control by the construction industry. And it has also prompted some changes to be planned for the industry’s “bible” – the BS5502 standard, which provides all the guidelines and requirements to design an agricultural building.

Depending on their use, buildings are given a classification rating of between one and four. One is the highest standard and four is the lowest. But the yardstick for the classification is due to change to occupancy level (the number of people/100 sq m for a given period of time who are likely to be in the building) rather than just the current square meterage.

Class two for example, is a six hour day with a density of two people/100 sq m to a maximum of 10 people. Class three only allows up to five people at a density of one person/100 sq m for a maximum of two hours/day, while Class four is one person/100 sq m for one hour/day. Class one has no such restrictions and also has a 50-year design life – more than double that of Class two. 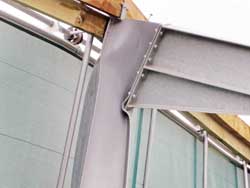 Most farm buildings are built to Class two, but additional planned changes to BS5502 will require buildings more than 200m above sea level to be Class one and this classification will also be required for grain stores.

BS5502 should set the loads the building is designed to take and then the frame will need to be designed using Eurocodes – a set of standardised European design standards that provide a common approach to structural design across the EU.

All of which brings us to the mandatory use of CE marking for steel, concrete and timber-framed agricultural buildings. CE marking is not a quality mark, but a declaration by a manufacturer that its products meet the minimum requirement of a ‘harmonised technical specification’, which, broadly speaking, implies that it is fit for purpose.

To ensure manufacturers are complying with these directives, the design process and quality control is to be checked annually by what is called a “notified body”, accredited by the UK Accreditation Service. Only if the frame manufacturer passes these inspections will it be certified to CE mark its frames.

As good as this is likely to be for the quality and consistency of farm buildings, the downside is that for a manufacturer to qualify for the right to CE mark, there is a high cost in terms of equipment, staff training and administration.

“This could mean as many as half of the UK’s tally of about 400 frame manufacturers going out of business,” says Mr Hutchinson. “Although more than a few will continue in business by purchasing CE marked frames from other certified fabricators.”

Mandatory use of the CE mark, combined with annual inspections of fabrication processes to ensure standard compliance, will, it is hoped, see the end of cowboy manufacture and construction. 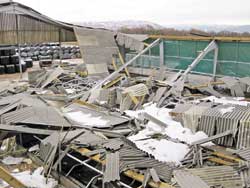 RIBDA also plans to start an independent on-site checking system for its members to ensure no short cuts are being taken as the building is erected. It’s widely reckoned that one of the key reasons given for buildings collapsing was the building not being erected in accordance with the required specification.

For the farmer, who is unlikely to be well versed in building quality and construction techniques, there will be an assurance that his new building will be fit for purpose and safe to use – assuming he uses a RIBDA member.

Furthermore, if Mr Hutchinson’s insurance warning is heeded, there will be some peace of mind in knowing that the investment is protected financially. He advises purchasers of new buildings to check that all paperwork confirms that the frame is CE marked.

However, the cost of agricultural buildings is likely to rise as a result of CE marking, as companies seek to recover their investment in becoming a certified fabricator.

“These extra costs will be more prevalent at the cheaper end of the market where the biggest changes will have to be implemented,” he says.

“For manufacturers that already provide what could be considered to be a quality service, the changes will not be so great and the increase in costs may be lower as result.”