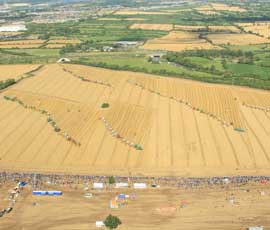 The record for the biggest number of combines to all be cutting in a single field is set to be broken this summer, hopes Irish charity combines4charity.

The organisation managed to set the world record in 2009 by getting 186 combines in a 100-acre field near Duleek, Co Meath. That achievement raised 300,000 for Barnardos, Gary Kelly Cancer Support, Self Help Africa and the National Rehabilitation Trust.

However, the record was broken the following year by another charity which managed to get 200 combines into a (presumably even larger) field in Saskatchewan, Canada.

But Tony Brady from combines4charity has said that he plans to retake the record this year by getting 250-300 combines in a single field, all of them working (fairly slowly, we guess). The total is expected to include some 20 combines from Northern Ireland and some coming over from the UK mainland.