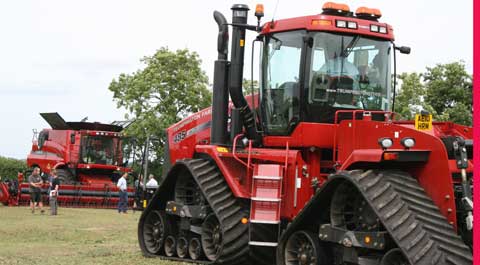 Satellite guidance systems have become more and more sophisticated, but the process of ferrying data between the tractor and farm office remains a stumbling block.

Currently USB memory sticks are the tool of choice for manually transferring application maps and other data between machine and computer.

These work fine most of the time, until the driver drops them in a boggy hole or they sit under a pile of papers in the office waiting for someone to extract the information within.

To address the problem, farmer-run GPS network RTK Farming is developing a service that will wirelessly and automatically transmit information to and from the vehicle’s GPS control box.

This development means no more memory sticks will be needed – the driver will just hop in the tractor and the information he needs to complete a job will already be loaded on to the control box.

Once he finishes the job, all the information collected while doing it will whizz through the ether and land safely in the farm office, says David White, one of RTK Farming’s founder members. “For example, an agronomist will be able to prepare a list of recommendations in programs such as Muddy Boots or Gatekeeper and send these directly to the control box in the cab. The sprayer operator can then open one of these jobs while sitting in the sprayer, treat the field and when he closes the job on the screen all the information will be transferred wirelessly to the office.”

The service, called Easy Connected, will also store this information in a secure central office that farmers will be able to access from any computer. This will fully automate the keeping of field records, reducing time spent manually updating records in the office.

With the help of an expert at the office users will also overlay information from various other sources, such as yield and fertility maps to see how different practices affect yield and gross margin. Tapping in a unique password will give farmers access to their files from any computer connected to the web.

RTK Farming is working with AS communications and Trimble to set up the wireless system, which it will be testing with a group of four to six members, says Mr White. “If this works, we will consider offering the service to the whole group as a paid for service.”

To make the wireless system work, each machine will have to be fitted with a wireless modem, says William Mumford, managing director of AS Communications. This will be hidden somewhere in the tractor and plugged into the machine’s GPS control box. RTK Farming’s network uses Trimble technology and this modem would work with all CFX-750 and FMX control boxes.

Farmers wanting constant communication with the tractor will need to purchase a mobile phone sim card as well as the modem. But those wanting to save a few quid can opt for the cheaper, Wifi alternative which syncs the tractor with the web each time it gets close enough to the farm office to pick up its wireless router.

By marking an operating zone on a map, an alert will be sent to the farmer as soon as the vehicle passes outside this area. If the vehicle has been stolen, the on-board, hidden GPS receiver will also track the stolen vehicle. However, this function will only work if a mobile phone sim card is fitted.

The system RTK Farming sets up is likely to use Trimble’s new My Connected Farm cloud website to manage the transfer of data between the tractors and the office. My Connected Farm is due to be launched on 1 March and will work with all new Trimble products.

RTK Farming was founded by a group of farmers based in South Cambridgeshire who have joined together to build an affordable GPS RTK network.

The group’s signal covers 900,000ha, stretching from the M25 in the South to the wash in the North, but it plans to cover the whole of East Anglia before the 2012 autumn drilling campaign begins.

New members pay an initial one-off fee of £200 for RTK Farming membership and £500 a year for each machine connecting to the service. An initial site survey to check that the farm has 100% signal coverage is required and costs around £150, but this is usually paid for by the tractor equipment supplier.

Investing in a GPS guidance system is a pretty confusing process, but there are a few things you can do to make the process a bit less painful.Firstly, machinery manufacturers are still not fully co-operating with each other, so if you have more than one colour on the farm you could have problems making everything work together.

One solution is to stick to one brand of machinery, but a more flexible approach would be to buy all new equipment without the manufacturers’ branded hardware and buy your own aftermarket equipment. It’s a bit like opting for a TomTom for your car rather than choosing a built-in sat nav.

This approach means kit can also be swapped between machines.At a recent RTK Farming training day members suggested that this was the most reliable and flexible way to get kitted up for GPS-guided precision farming.

This latter approach has several benefits. Firstly, you have some scope to move the system between machines, such as from the sprayer to the combine and secondly it is more straightforward to upgrade. Several members running factory-fitted systems were having problems connecting to the network.

The systems fitted to their machines were supposed to work with the network used by RTK Farming, but because they were outdated and difficult to upgrade, they were struggling to fix the problem.