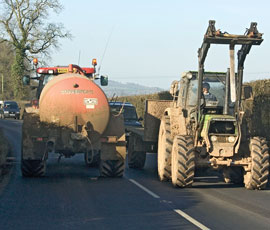 It was announced by roads minister Robert Goodwill, who has a 10ha family farm at Terrington near Malton, York. The venue for the announcement, appropriately enough, was the premises of Essex trailer maker HM Trailers.

The 90-day consultation will seek comments on increasing the weight of agricultural trailers. At the moment the combined weight of tractor and trailer is limited to 24.39t, a figure that was adequate 20 years ago but is now increasingly viewed by farmers and contractors as wholly inadequate for modern farming.

Views will be sought on increasing the train weight of tractor and trailer combinations to 31-37tonnes, depending on number of axles and type of suspension.

Likewise, the consultation will gather views on speed limits for agricultural vehicles. At the moment, the law limits all agricultural tractors (other than specific types of transport tractor like the JCB Fastrac) to 20mph (30kph).

The consultation will seek views on raising that to 25mph (40kph).

“The NFU has been campaigning for the weight and speed limits for agricultural tractor and trailers to be examined for many years,” said NFU vice president Adam Quinney. “The current regulations, which were set decades ago, do not reflect the technological capabilities and carrying capacity of modern tractors and trailers.

“While other farm equipment has got larger over time, the restrictions on 21st century tractors and trailers have prevented the efficient transport of crops from the field. This inefficiency not only leaves us at a competitive disadvantage compared to other member states with higher limits but also, we believe, has a corresponding negative impact on the environment and road safety.”

One controversial area still to be fully thrashed out is that of MOT-style testing. While most farmers would probably prefer not to have to have their tractors tested, that may have to change if the greater speeds and weights are to be allowed.

Another option is to have a two-tier system where only those who take the test are allowed to use the higher speeds and loadings.

Higher tractor towing weights are coming … but not quite yet