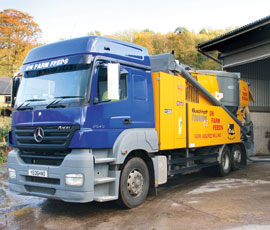 A lot of dust, a lot of noise and a pile of hessian sacks full of rolled barley. That’s the image conjured up by many farmworkers when on-farm feed milling and mixing is mentioned.

Modern equipment installations have no doubt improved on that but a lot of livestock producers have been happy to swap those discomforts for the convenience of a mobile feed preparation service.

“It’s a more convenient way of using home-grown cereals and pulses, and with farms being run by fewer people these days, there often isn’t the manpower or time to do the job with a small mill and mix unit,” says Edward James of On Farm Feeds. “It might take the best part of a day to prepare enough feed for a fortnight – we can do it in two or three hours with no interruption to the daily farm routine.”

Edward’s father Alan started the service 20 years ago when given the opportunity to acquire an existing local business and its Feedmobile unit. A second machine was added as the customer base expanded and four years ago another business acquisition helped the operation grow further.

“We now operate across south Wales, up to Powys, Herefordshire and south Gloucestershire, and down to the Bristol area into north Somerset – anywhere up to 90 miles from our base in Llantrissant,” says Mr James. “Two of our machines operate all year round, preparing up to 10,000t of feed each a year, with our third mobile operating mainly during the busy winter months.”

While early mobile feed mill-mix machines were pretty basic, the current technology produced by Germany’s Buschhoff, represented by B&W Feeds in Dorset, and Tropper of Austria is much more advanced.

The newest machine is truly state-of-the-art. It’s a purpose-built combination of hammer mill, roller mill and mixing tub that can prepare home-grown cereals and pulses, add molasses, soya oil, protein and minerals as required, and mix everything into a consistent bespoke ration.

“Compared with the old machines, output is up from just 40t to 150t a day and the job’s a lot quieter thanks to the improved mill design and more effective sound-proof cladding around the auxiliary engine,” says Mr James.

The “auxiliary engine” referred to is a Mercedes-Benz V6 diesel of some 380hp that works hard running the two mills, the pneumatic suction/blower system and the vertical auger inside the mixing tub, which can be extended hydraulically to increase capacity from 8,200 to 11,700 litres or from typically 4t to 7t of feed.

Even the truck chassis is pretty specialised. It started life as a three-axle tractor unit hauling road trailers but has been stretched, with the single-wheel lifting axle placed behind the twin-wheel drive axle to leave room for various items of pipework.

With the auxiliary engine running flat out and a thirsty motor moving the truck from farm to farm, fluctuations in fuel prices have a big impact on profitability. So the concession that the National Association of Agricultural Contractors secured for mobile feed milling trucks to run on red diesel was very welcome.

“We were allowed to use red diesel in the auxiliary engine but the NAAC successfully argued for the classification of mobile feed trucks as agricultural vehicles and use rebated fuel in the main engine as well,” explains Edward James. “It makes sense because the trucks can’t be used for haulage or anything like that, only for preparing farm livestock feed – a purely agricultural operation, in other words.”

On Farm Feeds has its own standard rations using uniquely-formulated minerals and proteins produced by/ Rumenco but can easily tailor them to individual requirements and if need be can change or add different rations on the day, such is the flexibility of the operation.

With digital scales operating to +/-5kg precision providing an accurate mix and a known quantity of feed in store, it’s a reliable and headache-free way of producing feed for livestock.