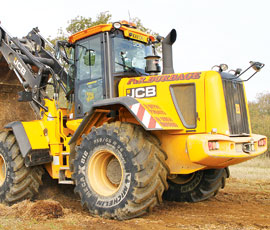 With a total of 2,400ha (6,000 acres) of grass and maize silage to harvest each year and the thick end of 150,000t of muck to load and spread, the contracting company of P&R Burbage is no stranger to loading shovels.

Based at Nobottle, Northamptonshire, the business is headed by brothers Peter and Richard Burbage. They bought their first loading shovel in 2002 and in June this year took delivery of their third – a JCB 434.

“It’s not just the handling capacity of the loading shovel which makes them an attractive choice,” says Richard. “It is the fact that such machines are purpose-built loaders and have been designed to withstand the forces loading work imposes on them.”

There is a cost issue to be considered. The Burbage brothers admit that, if they weren’t also heavily involved in muck spreading, it would be difficult to justify such a machine purely on the back of the silage operations – even though they say they would probably still be using one.

“We had to weigh up the advantages a bigger and more expensive machine would give us,” says Richard. “If, as we would expect, output is significantly higher, then the extra cost could be justified. But then, against that, we had to accept that the size of the 434 would mean its use in buildings was severely limited.”

The decision taken, a Cummins-powered JCB 434 arrived in June just in time to see the end of the first-cut silage.

Equipped with a 4.2m wide home-built buckrake, the loading shovel made light work of keeping up with the output of the 530hp Claas 950 forage harvester.

“The first point we noted was just how manoeuvrable the 434 is – despite its 6.8m length and 14t weight,” he says. “Some of the clamps we work on have very limited space. That requires us to make a 90° turn at the base of the clamp and pick up a load of grass at the same time – something anything other than a pivot steer loading shovel would struggle to achieve.”

This procedure also highlights another essential ingredient in the purchasing decision – the availability of experienced loading shovel operators.

“If we are to get the best output it’s absolutely essential to have a good operator on these machines,” says Richard. “Loading shovels are completely different animals when compared with tractors and it’s an acquired skill to operate them well and efficiently.”

The 434’s turbocharged six-cylinder engine drives through a six-speed ZF transmission offering, with the aid of a torque converter, automatic gearshifts for a top speed of 40kph.

In the all-important hydraulic department, a variable displacement load-sensing system with a flow rate of 132 litres/min at 250bar pressure gives a 9.8t lift capacity and a fearful tear out force. A four-ram, twin-arm geometry provides the operator with a good central view of operations.

“The greatest feature of this loading shovel is its ability to grip and operate in conditions which would see tractors slithering about and making an awful mess,” he says. “And this is down to the weight of the machine, the Michelin tyres and the sheer power of the machine – something you would never get with a tractor or a telescopic loader.”