Arable farmers are increasingly seeing the benefits of using artic lorries to haul grain from the combine, slashing costs by removing multiple tractors and trailers from the roads.

These vehicles can also provide extra work in the winter for carting grain to the port or other farms.

However, it’s easy to get caught out in what has become the minefield of UK and EU laws concerning goods vehicles.

Getting trapped on the wrong side of the rules can land the driver and owner in some serious hot water, with punishments ranging from a slap on the wrist to a heavy fine and, in the most serious cases, you can be looking at a stint in jail.

We’ve taken a look at the laws you have to stick to and the ongoing training you’ll need undertake if you’re driving commercially in a vehicle carrying over 3,500kg. 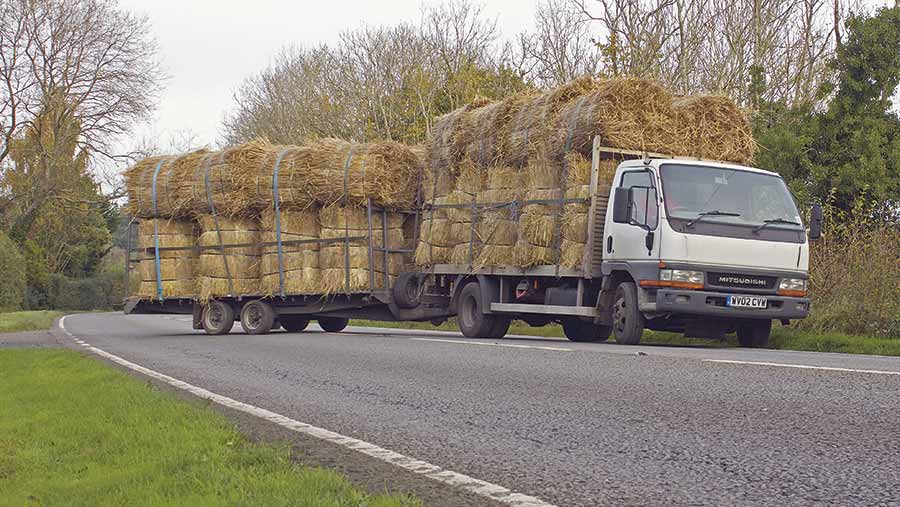 This stands for Certificate of Professional Competence, which all commercial drivers of buses, coaches or lorries must hold.

The qualification involves half-a- day’s training (drivers can choose how long to train before they are confident to pass) and exam consisting of two modules – a case studies test and vehicle safety checks. Once these are passed, you will need to put in seven hours periodic training a year over the next five years – 35 hours in total.

The periodic training can be completed in a one-week block or one day each year, though DVSA encourage drivers to spread periodic training out over the five-year period to keep themselves up to date with best practice.

The aim of periodic training is to keep users up to date with the latest industry standards, including improving road knowledge and first aid skills as well as subjects like eco-safe driving and safe driving around vulnerable road users

You must carry the resulting photo card with you when driving – there’s a £50 fixed penalty if you are caught without it.

In a similar way to crop spraying licenses, passing your car test before 1 January 1997 came with added benefits – known as grandfather rights or acquired rights.

These were an automatic entitlement to drive a number of vehicle combinations that now require a test, including a car towing a trailer, a 7.5t lorry towing a trailer and a minibus.

However, from 2015 everyone driving professionally – including on this entitlement – had to complete the 35 hours over five years, although there is no obligation to sit the initial exam unless you are a newly-qualified professional driver.

When don’t you need a CPC?

You don’t need driver CPC if you meet all of these conditions: 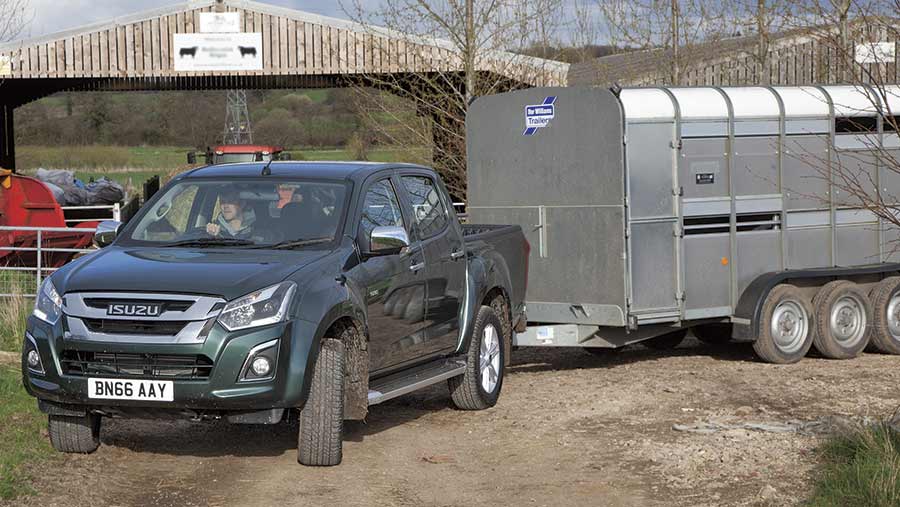 Commercially, there aren’t many situations when a CPC isn’t needed. One example of when it doesn’t apply is if you’re driving a lorry to move your personal possessions.

This is classed as non-commercial use and doesn’t need a CPC-qualified driver.

You also don’t need a CPC when carrying equipment or materials that you use during daily work and driving the vehicle isn’t your main job.

This includes a scaffolding company, or a farmer who uses a lorry to transport fencing materials around the farm on public roads.

However, when a farmer drives a lorry taking livestock to market or grain to the port, he falls into a different category.

Although driving may not be his main job, he isn’t carrying equipment or materials for work and the contents of the lorry are intended for sale and reward, so therefore a CPC qualification is required. 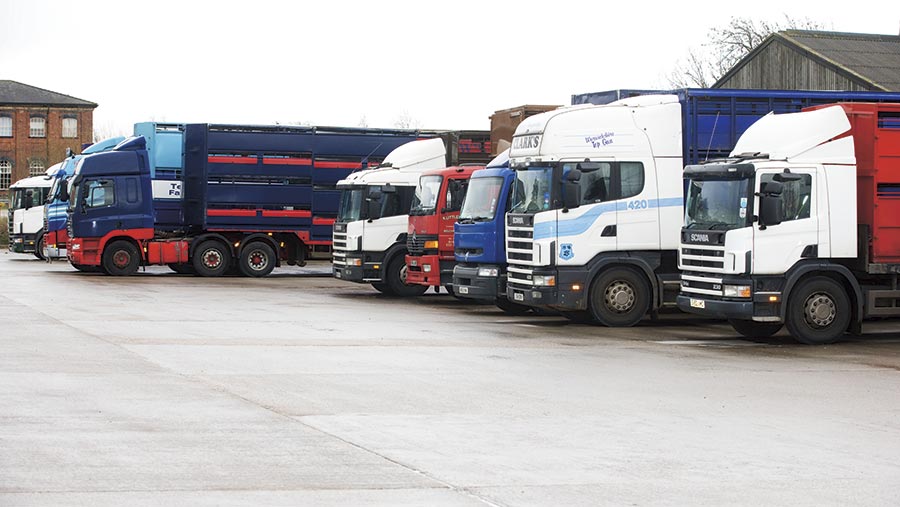 Large-scale vegetable producers have to be careful as well. Typically, the best mode of transport for getting dozens of workers to the field is a minibus, which avoids leaving numerous cars dotted around the field edge.

Driving the bus requires the possession of a D1 license. However, even though driving the bus is a small amount of the worker’s day, a CPC is still required as they are transporting other workers and not equipment or materials.

Minibuses also come in handy on farm walks or open days. The driver may hold a D1 via grandfather rights and is driving the bus not for hire or reward, but they also need a CPC as it is classified as non-commercial carrying of passengers on public roads. However, if they stick to internal tracks they will be fine.

If you’re unsure whether you need one seek legal advice as, when the nuts and bolts are exposed, it’s the courts that have the final say.

You can be fined up to £1,000 for driving professionally without a CPC qualification.

What is it going to cost me?

It’s not cheap. The half-day training to pass the initial exam costs £450 on average, and you’ll need to ask someone nicely if you can use their wagon for a few hours for the test.

Unfortunately, there is no maximum fee to limit what training providers can charge for their courses.

The average we found for a seven-hour course was between £70 and £80, with discounts available by booking all 35 hours in one hit.

The DVSA provides a list of training providers, with courses taking place nationwide. Using one of these is recommended as not every course will contribute towards the total hours accrued at the end of the five years.

A tachograph is a recording device built into any vehicle with a gross mass of 3,500kg or above – regardless of trailer – a tachograph must be fitted and used when the journey is in scope of EC drivers’ hours rules.

Tachographs are designed to record driver work hours, rest periods and vehicle data. On older lorries, analogue tachographs will be fitted and they use charts.  A chart cannot be used for more than 24 hours.

Regardless of what type of tachograph is fitted you must always carry any record sheets made in the previous 28 days and at all times carry your driver card.

If you use your Toyota Hilux for towing, you will only need to fit and use a tachograph if the gross combined weight of the trailer and the truck is more than 3.5t.

Some vehicles have physical limitations, which prevent the fitment of a tachograph so these vehicles cannot be used if the journey is in scope of EC drivers’ hours rules as it is not permitted to keep manual records as an alternative to having a tachograph fitted.

Things get complicated as there are laws for driver hours and tachographs for the whole of the EU. But when these don’t apply, GB domestic laws come into play.

The EU rules offer three exemptions for vehicles used in agriculture, including vehicles that transport goods as part of an agricultural activities – including livestock and grain – within a 62-mile (100km) radius of the business address. This is a bonus when using an eight-wheeler for some longer hauls from the combine.

The third agricultural exemption is for carrying live animals between a farms to local markets and vice versa or from markets to local slaughterhouses within a radius of up to 100km.

When any of these exemptions apply, GB laws comes into force regarding driver hours for these vehicles.

GB laws state that you can’t drive for more than 10 hours/day either on a public road or off road, and duty time (time at work) must not be more than 11 hours/day, although the limit doesn’t apply on days at work that you don’t drive. A driver who does not drive for more than four hours on each day of the week is exempt from the daily duty limit for the whole week.

Failure to take the correct breaks and rest periods from driving can land you and your boss in some unwanted bother as fixed penalties can be issued or a court summons.

There are various ways to manage your driving times while still being on the right side of the law. Under EC drivers’ hours rules the maximum a single person can drive per week is 56-hours – this is six days of driving, consisting of four nine-hour and two 10-hour days.

Drivers must take a 45-minute break after 4.5-hours driving.  It can be taken in two intervals of 15-minutes followed by 30-minutes.

However, no more than 90-hours can be spent driving over a two-week period. A 56-hour week has to be sandwiched by two 34-hour weeks.

Detailed information of all the drivers’ hours, tachograph and working time rules can be found here: https://www.gov.uk/guidance/drivers-hours-goods-vehicles

If you transport goods using a vehicle that is over 3,500kg total weight for hire or reward, you need an operator’s license.

You’ll also need one if you use a truck and trailer with a combined plated weight of the two units in excess of 3,500kg.

These licenses are in place to enforce laws regarding maintenance of commercial vehicles. There are three types of license depending on your type of work and who your employer is.

The more commonly issued ticket in the UK is the standard license, which means the operator can transport their goods as well as other’s around the whole country. Any jobs further a field will require an international license, while the third is a restricted licence, for operators who are only transporting their own goods in connection with their trade or business.

For more information on all of this, head to the DVSA.

To put the above legislation in some context, we have devised some made up scenarios involving everyday journeys and asked the DVSA press office to clarify what is required.

Using a rigid lorry, a farm employee – who has the C1 license required to drive the lorry – drives to a neighbouring farm to collect animals and then take them to market which is 5 miles down the road.

Answer: The derogation from the EC driver’s hours rules for “vehicles used for the carriage of live animals between farms and markets or markets to slaughterhouses within a radius of up to 100km” – means the journey would be in scope of GB domestic driver’s hours rules.

A South East arable farmer owns a couple of rigid lorries. One is road registered and the other sticks to internal roads, the main role is helping with grain carting during harvest.

Answer: Vehicles used entirely on roads that are not open to the public are not in the scope of any drivers’ hours rules. Journeys wholly or partly on roads open to the public are in scope of GB domestic rules, as they are made by an agricultural, horticultural, forestry, farming or fishery undertaking carrying goods as part of their own agricultural activity within a 100km radius of their base.

A farmer uses his Toyota land cruiser to collect fencing materials from the local fencing depot, 10 miles down the road. The gross weight of the rig is over 3.5t.

During harvest an arable farmer tows a 2,000l bowser behind his 4×4 to fill up combines and tractors in the field. This takes him over the 3,500kgs GVW.

Answer: This journey would be out of scope of EC rules (and have to comply with GB domestic rules) as they’re being made by an agricultural, horticultural, forestry, farming or fishery, who are undertaking the carriage of goods as part of their own agricultural activity.

However, if the journey is more than a 100km radius from the registered base, then EC rules will apply.

As the vehicle is towing dangerous goods over 1,000 litres, the trailer and vehicle both require an individual ADR license, carried out at a local DVLA test centre.

D1 – Minibuses for up to 16 passengers