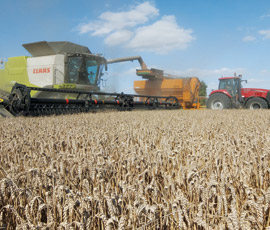 The slow-but-steady rise of controlled traffic farming (CTF) is beginning to spur innovation in chaser bin design, it seems.

Most CTF systems specify that the chasers should run in the tramlines and 12m is the favoured distance. However, at that spacing the combine’s unloading auger generally can’t quite reach far enough to empty into the chaser bins when unloading on the run.

The seemingly obvious solution – to extend the auger – turns out to be more complicated than at first sight, both from an engineering and legal-length-of-machine point of view.

But two companies on different continents have come up with a similar solution, which is to fit a side extension to the chaser. The details and design, however, differ.

Australian trailer and chaser bin maker Dunstan has just won Innovation of the Year at the Wimmera field trials for its machine, which features a swing-up grain table. The 3m x 3m table makes it easier for the combine driver to hit the target and a splitter in the middle of the table distributes the grain evenly.

Getting the angle of the table steep enough to ensure a good flow took some experimentation, and Dunstan ended up lowering the side of the chaser to achieve that. Once the grain is in the bin, two augers at 45deg to the axes of the bin distribute grain to both ends.

The bin has a 25t capacity and the track width of the tandem axle can be specified at the time of purchase. Price for the chaser bin plus table is AUS$100,000 (£58,000), although it currently has no UK importer.

Nearer home, farm manager Jeremy Durrant at farmers EW Davies of Thaxted, Essex, has moved the operation to a 12m CTF system, which included the purchase of an 18t capacity Richard Western GR18 chaser and MacDon header for the farm’s Lexion 770 combine.

Western developed a two-stage conveyor that slides out to meet the combine auger.

Like the Dunstan machine, internal augers distribute the grain to the front and rear. The system costs £22,000 and can be fitted to any of the firm’s three models, whose basic price ranges from £46,000 to £65,000.