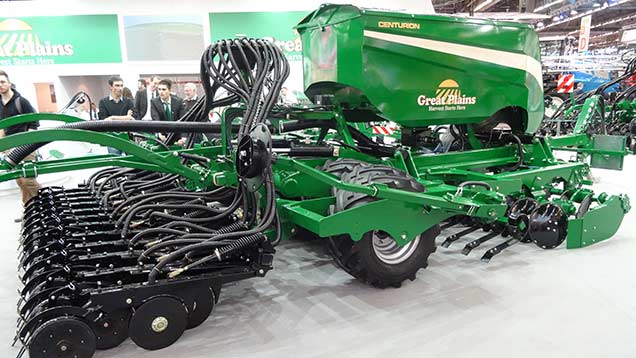 The new CDA400 4m grain-only version of the Great Plains Centurion cultivator drill, seen at last week’s Paris show, has a new-look 3,000-litre hopper and gains a 3m sibling that will be launched in the summer.

Meanwhile, grain-and-fert variants for the UK and Western Europe will be available later this year in 6m, 4m and 3m widths.

The CDA400 has two rows of 460mm cultivation discs running ahead of a tyre packer that offers consistent consolidation infront of Great Plains’ 00 Series openers, with the option of either 125mm or 167mm row spacings. Control is via a Muller Isobus-ready system.

Hydraulic down pressure is said to ensure the coulters operate at a consistent depth in all soil types and accurate seed delivery comes via a pneumatic delivery system.

The new drill folds to 3m for transport, with the transport weight carried on the packer.

Hopper weigh cells can be fitted as an option. Working through the hydraulic control system, these ensure the hopper’s weight is evenly distributed right across the drill’s width, however much grain it contains.

The CDA400 will be commercially available in limited numbers from July this year. Prices will be announced in June at the Cereals event.