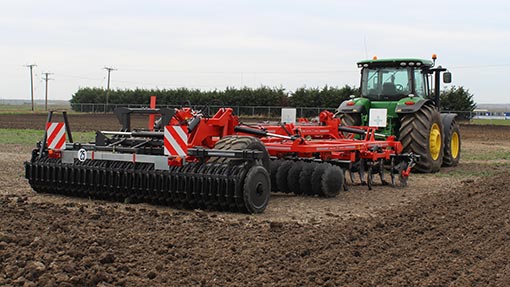 Like its competition, the Solis is designed to work soil from the top down, incorporating surface trash and providing suitable conditions for weed seeds to chit.

Working depth range is just 60-120mm, but clever spacing of the tines and discs means it should move all soil, even at its shallowest setting. This makes it quite different to the maker’s well-known Discordon, which works much deeper and leaves a rougher finish.

At the front of the Solis there’s a row of 620mm diameter discs. These are angled to help the cultivator pull in a straight line and are mounted on fully sealed bearing units. They’re greasable, too, and have a relief valve to prevent seals popping out with overzealous pumping of the grease gun.

Behind the discs sit three rows of offset tines. These are spaced 230mm apart, which Gregoire Besson claims gives maximum soil movement without it blocking with trash. The front two rows are spaced 700cm apart and the rear set 800cm to give the soil more space to settle.

Buyers will also have two tines to choose from – a pigtail for lighter soils or a coil-sprung, auto-reset tine for heavier stuff. These Eurochisel tines also have independent depth adjustment, which should be handy for taking out tractor wheel marks.

Another row of 620mm discs sits behind the tines and there’s the option of a double or single roller on the back. These are available as a traditional crumbler or Gregoire Besson’s own V-profile rings.

Depth control is fully hydraulic and is adjusted by altering the drawbar height at the front and the roller depth at the rear.

The Solis is available in 4m, 5m and 6m working widths and all fold vertically for road transport. Minimum horsepower requirement for the 4m version is 260hp and 360hp for the 6m version.

The HRW8 is designed to work with tractors from 100-300hp and can be switched from on-land to in-furrow ploughing in a couple of minutes. All the operator needs to do is switch a couple of hydraulic pipes fitted with quick couplers.

The smallest plough in the range is a three-furrow and it can have a maximum of seven bodies bolted on. It’s also available with standard C-shaped legs or cranked ones. These are said to make the plough easier to pull as they direct the pulling forces down the centre of the plough.

Other features include a suspended headstock and bushed main pivot bearing to prevent the main casting wearing out.