Seeing 500 acres of winter wheat that’s been demolished by slugs prompted one Cambridgeshire farmer to rethink his current drilling regime. Edd Mowbray finds out why Simon Chaplin built his own prototype model rather than buying an off-the-shelf market leader.

On a five-star resistant black grass farm, the advantages of later drilling to gain that extra glyphosate application can be the difference between success and failure of a crop.

The gamble is how long to delay it without compromising seed bed quality and the need to get over the land in conditions that won’t resemble the Somme once finished.

Abington, Cambridgeshire, farm director Simon Chaplin currently has six mainstream drills in his fleet but none of them give him full-blown confidence for drilling cereals into November.

Mr Chaplin runs some 1,659ha ranging from Kelso, Scotland to Cambridge with land in Norfolk and Northampton making up the rest of the acreage. 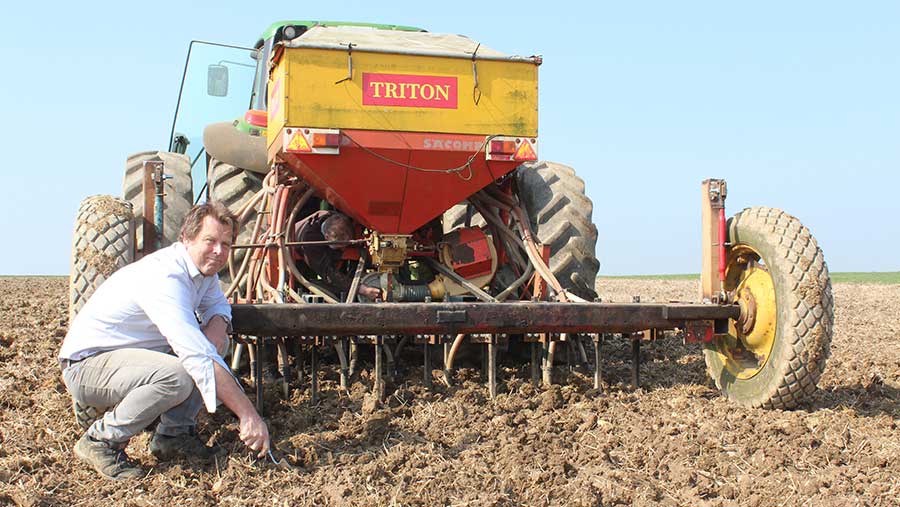 Mr Chaplin’s first venture into drill design was a modified Sumo trio which measured eight metres in length and was used to sow winter wheat in Scotland.

On medium soil it performed well, but the lift capacity required was far greater than his tractors could handle, while on the heavier soils the disc coulters left some of the seed uncovered.

He claims his home-built Triton SP seeder will work in any soil conditions, with any crop and in any weather conditions, which is bound to perk the interest of many arable growers who are forced into spring cropping to lengthen drilling windows.

After some long winter evenings in front of the fire dreaming up the design, the prototype was manufactured on-farm in Cambridgeshire. It’s a simple design with no moving parts or grease nipples, while its crude, bulky frame would look more at home with a set of subsoiler legs bolted to it.

The 3m version is constructed from 100x100mm, 5mm thick box section steel welded together in a square design with three parallel beams housing nine legs each. Mr Chaplin’s choice of a larger frame construction – when compared with other low disturbance drills – was driven by its prolonged use in heavy clay soils.

The two front beams house nine seeding legs that are spaced at 16cm intervals and positioned in a staggered formation between the two rows. Manual depth adjustment stretches all the way from 1.2cm to 15cm, which he says makes it more versatile than most of his rivals.

Where: Kelso to Cambridge

On the third and final beam are nine slightly shorter closing legs set to run on the untouched land in-between the channels left by the front seeding tines – meaning one closing leg runs between two seeding tines.

Triton has patent pending on the bespoke UK-manufactured 75cm long steel seeding legs which have a leading tungsten carbide steel edge and can be reversed once worn.

The stainless-steel seeding tube attaches to the rear of the leg and has been pinched to 25mm at the base to help soil flow while an optional ridge welded to the bottom of the leg improves placement for smaller seeds such as oilseed rape.

The legs are vertically bolted to the frame rather than on the angle which Mr Chaplin claims improves soil flow and limits the build-up of trash around the leg, making the drill virtually erosion free. 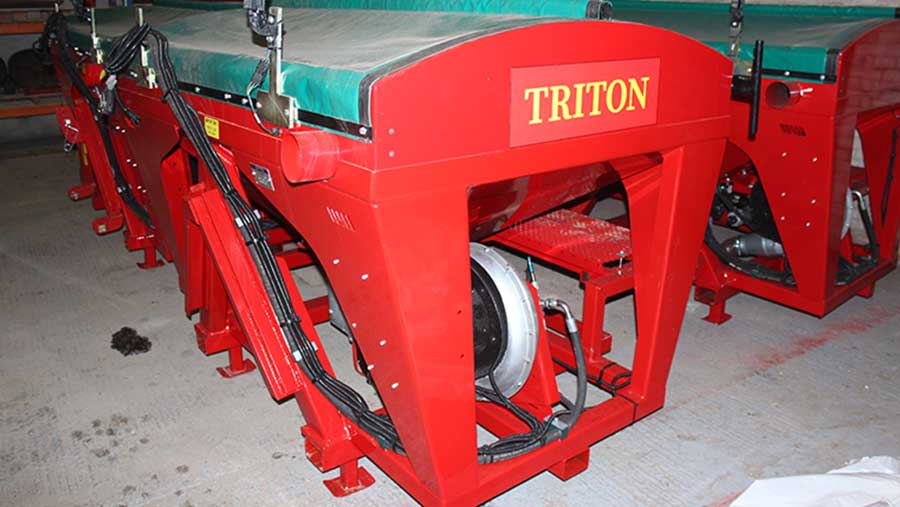 Unusually, the low disturbance drill doesn’t have a rear packer or covering tines because the company insists there isn’t a need to roll the land after drilling like you would with a conventional system.

Instead of packing the seed from above with a set of Cambridge rolls, the closing tine cuts a channel in-between the rows created by the seeding coulters. This forces the soil against the freshly planted seed and, in doing so, closes its channel with decent seed to soil contact, says the company.

Nine open channels are visible after the drill has passed but none of these contain the seed, which the company claims limits pest damage – particularly from slugs.

The end result isn’t the prettiest because it doesn’t leave a bowling-green level finish, but if you’re forced into drilling in late November then the priority is getting the seed in the ground, anyway. 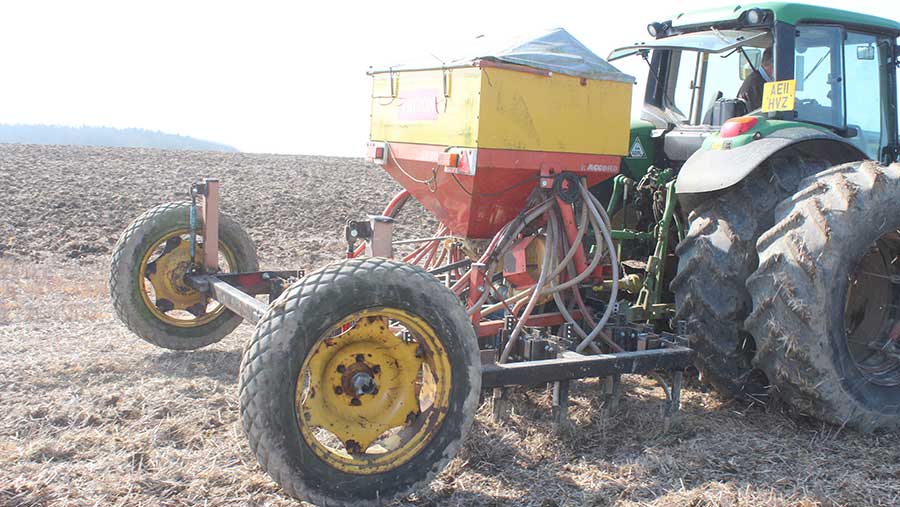 Triton claims that the slugs and blackgrass seedlings live in the open empty channels so when slug pellets and pre-emergence herbicides are applied, the target area is hit with minimal wastage. The seed then emerges in its own channel without the competition.

Some pretty crude wheels are attached to the rear of the prototype drill on adjustable link arms for depth control. These will be replaced on the production models by two smaller depth wheels mounted to the frame and weighted to 500kg for extra ballast to counteract the large front hopper.

Mr Chaplin was drilling spring peas at the time of our visit into unmoved Cambridgeshire clay. The modestly sized 3m version puts 27 legs in the ground and made the 180hp tractor sweat, so a 230hp or bigger looks a more sensible match. Even with the lack of power the pea crop has shown 90% emergence.

Three hectares per hour should be achievable with the right power plant while Triton claims that the best condition for their drill is wet ground covered in trash, which demonstrates the difference between them and other direct drills on the market from Claydon or Weaving.

There are four new drills being manufactured in the UK, which have been commissioned by Mr Chaplin for each of his four farm businesses. The updated versions see the seed hopper replaced by a 1.7cu m Weaving front-mounted tank that houses the radar-controlled seed metering unit.

Prices do seem to be on the expensive side with a 3m version not leaving you much change from £30,000 while adding a front tank adds another £9,500.

The initial cost may seem daunting for a pretty simple drill but Triton says buyers save more cash by not rolling or raking. Farms that already experience drilling issues will most likely have a front tank knocking around and so will only need the seeding rig, which is another way to save on the set-up cost. 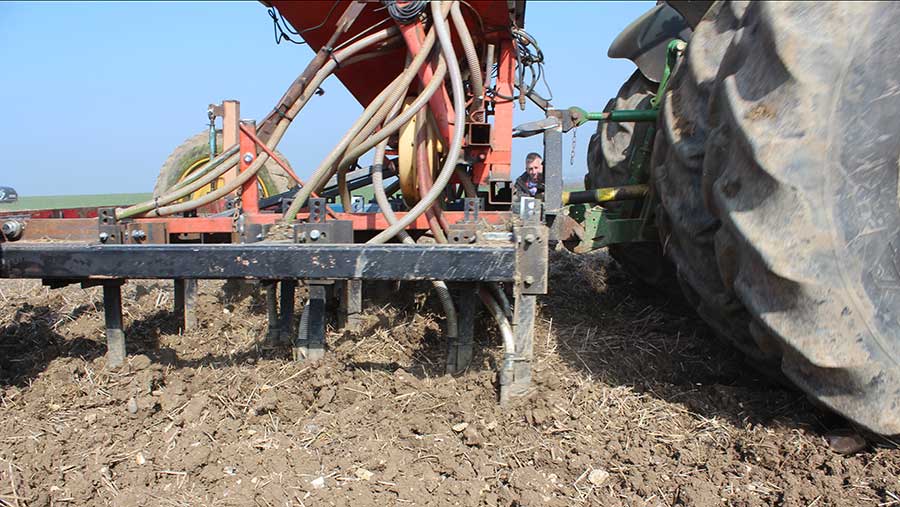 However, Triton says an introductory offer of £19,950 will run until after the Cereals show in June where farmers can see the new drill for the first time on a working plot. At the promo price, some growers could just about justify the purchase without getting rid of their current drills.

The company is building a 4m version for a customer on lighter soils but no designs for larger units are in place although they would cry-out for some serious horsepower.