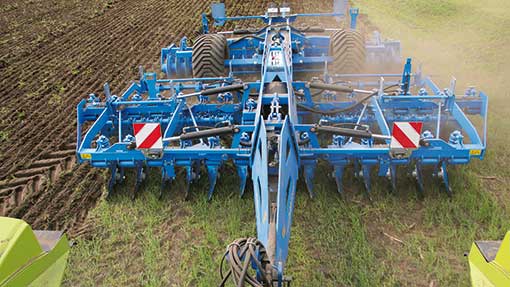 As the battle against blackgrass rumbles on, manufacturers are getting wise to what ticks farmers’ boxes when it comes to choosing machinery to deal with this extraordinarily persistent weed.

After two years of development and testing, both abroad and in the UK, Lemken’s Rubin 12 compact disc harrow will be available in the UK for the forthcoming season, according to UK general manager Mark Ormond.

“The key thing for the UK is getting the highest number of grassweeds to chit before drilling, and this is what we have concentrated on when designing the multi-purpose Rubin 12.”

Two rows of serrated concave discs with a diameter of 736mm mean the Rubin can work just as deep as a tined cultivator, while working just as well at shallower depths to create a stale seed-bed, he adds.

“We’re the first company to offer a compact disc harrow with discs of this size,” explains Mr Ormond. “The nature and size of the discs mixes and crumbles the soil profile at any depth.”

Disc angles of 20deg to the soil and 16deg to the direction of travel delivers what Lemken believes to be the optimum degree of penetration and soil movement, at depths of as little 7cm.

The first row of discs moves the soil inside out, while the second row moves soil from outside in. One centre disc levels out the middle of the row. “A lot of work has been done to eradicate any lateral pull, even at speed, and a symmetrical disc arrangement helps to achieve this, even at high working speeds,” says Mr Ormond.

An impact harrow behind the first row of discs both mixes and crumbles soil moved by the discs, while a levelling harrow at the rear leaves the soil level before the roller. These harrows can be adjusted and locked using a tool for winding them up or down.

In mounted models, the Rubin can be equipped with a depth and transport wheel that’s easily set with a pin and makes turning on headlands easier and the machine more stable during transport.

Although the Rubin can be fitted with a wide range of rollers at the rear, Mr Osmond expects the heavy packer roller to be the most popular in the UK for moisture retention.

Working speeds of 12kph and higher are advised, and horsepower requirement is anywhere between 50-75hp/metre. It’s available in 3m, 3.5m and 4m mounted versions and 4m, 5m and 6m semi-mounted models.

First seen at Agritechnica, Lemken’s Gemini front tank has a capacity of 1,100 litres. Matched to the 1,900-litre mounted Sirius sprayer, it is said to make for an efficient, but stable combination.

The Gemini can be specced to carry liquid fertiliser or chemical, with the latter being fitted with an agitator that ensures spray remains mixed at all times. Two selection valves switch between suction, clear water or spraying liquid, while an electric selection valve controls the liquid distribution between front and rear tanks.

Setting a plough electronically is far from new. But using Isobus to set a plough accurately again and again and on the back of different tractors is fairly novel.

Available on the Juwel mounted reversible plough range for the first time, Turncontrol Pro uses the plough’s electro-hydraulic swing gear and hydraulic angle adjustment to control these functions through the CCI 200 terminal or the Isobus control box already on the tractor, without having to operate individual spool valves.

As standard, the Turncontrol Pro system controls plough rotation, and the settings for working angle, width and depth via the hydraulic support wheel as well as GPS-controlled working width adjustment.

In the cab, there’s a Turncontrol Pro on-board computer that allows operating systems to be combined, saved and activated for up to four different scenarios, for example, for several fields at a time or for ploughing on slopes. 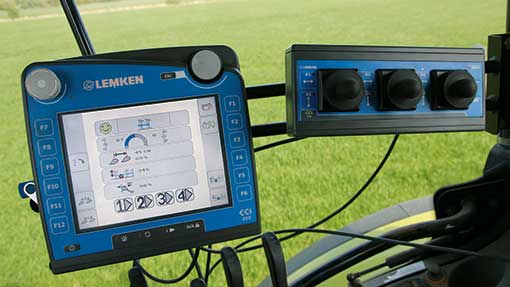 Lemken’s Turncontrol Pro takes electronic plough control to another level, thanks to Isobus.