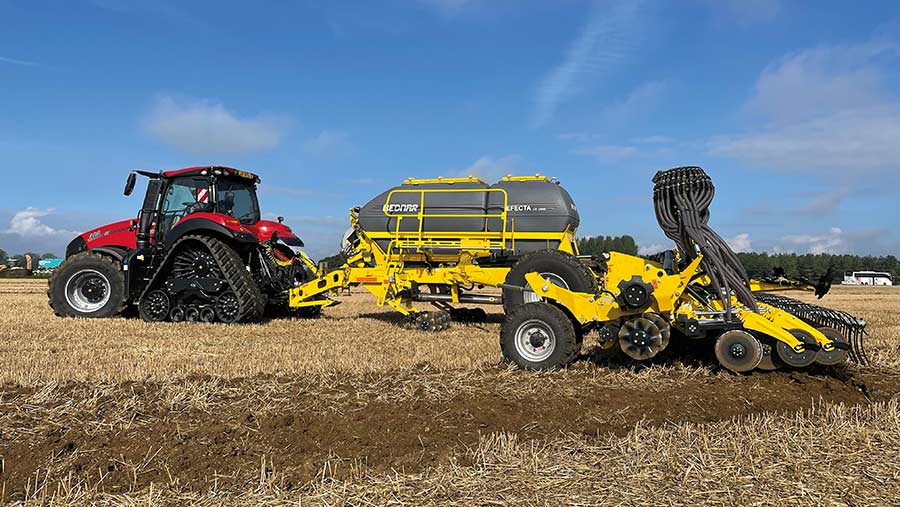 Punters piled in to Down Ampney airfield in Gloucestershire last month for the return of the Tillage Live event. Here’s a round-up of the best of the action.

Bednar’s latest drill offering is the 12m Efecta CE12000, which offers the ability to work in fully prepared seed-beds, cultivated ground or direct into stubbles.

The secret to its versatility is a hydraulic lifting tool bar in front of the seeding coulters that can be fitted with different cultivating elements.

One option – as fitted to the example at Tillage Live – is a set of wavy discs that are designed to chop and mix for a finer seed-bed.

Alternatives include a straight disc that can direct drill into some soil types, and a set of levelling paddles for more severe clod-bashing.

Buyers can spec both disc types and swap them over relatively easily, but the levelling paddles are not interchangeable.

Next year the firm should have a dedicated direct-drilling version and there will be a smaller 10m option. It may also be possible to order both discs and levelling paddles on the same machine.

Seeding is carried out by a row of rubber-mounted double-disc coulters that have a maximum coulter pressure of 130kg and are available with 12.5cm or 16.7cm spacings.

These allow working speeds of up to 20kph, although 16kph is a more realistic maximum in the UK.

Four metering systems are fitted – each with their own distribution head – which allows for section control every 3m. These are fed from a pair of pressured hoppers with 3,800-litre and 2,200-litre capacities, giving total storage of 6,000 litres.

Buyers can add separate small seed applicators, such as Bednar’s Alfa Drill, and additional Ferti coulters can place fertiliser between rows of seed. 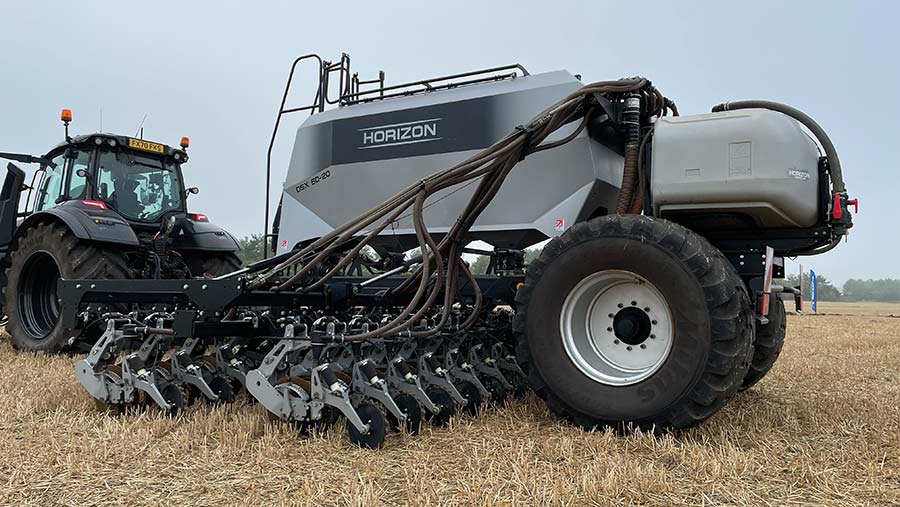 Since splitting from Sly Agri and setting up as a separate organisation, Horizon Agriculture has sold more than 40 of its DSX direct disc drills.

These machines are designed to work direct into stubbles – using an angled undercut disc that buries the seed under a flap of earth – but they can also be used in min-till cultivation regimes.

Each disc unit is mounted on a parallel linkage with hydraulic downforce adjustment that gives between 50kg and 235kg of pressure.

One alteration from the drill’s predecessor is a reduction in disc angle from 20deg to 10deg so that it throws less soil at speed.

There is also pneumatic adjustment of the rear closing wheel so that the operator can quickly alter settings from the tractor seat.

Seed can be routed to the front or rear coulters, allowing it to be planted at different depths, and the hoppers can be used for distributing slug pellets or solid fertilisers.

It is also possible to spec separate liquid fertiliser tanks.

Buyers have a choice of 4m to 9m working widths, and all bar the largest model use the same modular chassis. This means that working widths and row spacings can be adjusted without having to cut any metal. 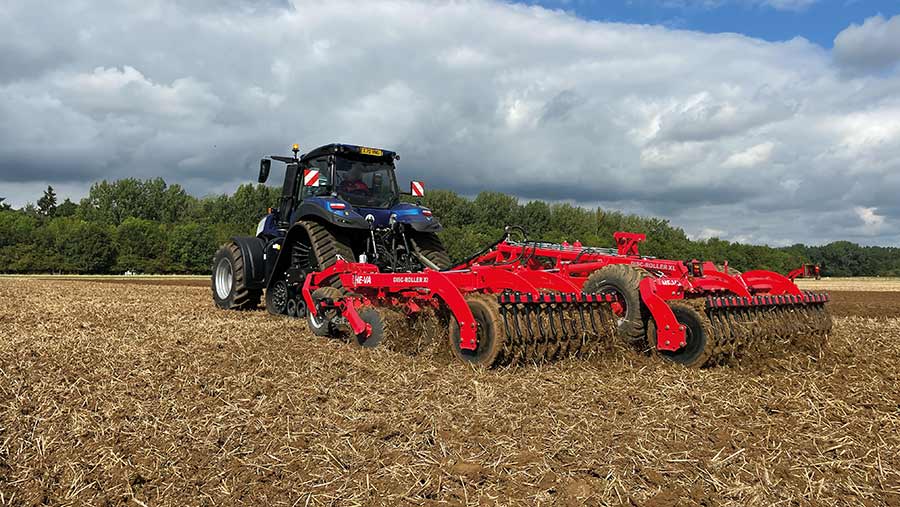 Tillage Live was one of the first outings for the heavier-duty version of He-Va’s Disc Roller cultivator.

The aptly named Disc Roller XL features larger-diameter 610mm rubber-mounted Sabre discs – up 100mm from the standard model – that can work to depths of 160mm.

These make the machine better able to cope when working in large amounts of trash, or direct into cover crops.

He-Va says the machine is suitable for both primary and secondary cultivation, from stale seed-bed preparation to cover crop incorporation and levelling ploughed ground.

It’s available in both mounted and trailed configurations from 2.75m to 7.25m, with prices starting at about £25,000. The pictured 6m folding model with levelling paddles has a retail price of £53,869. 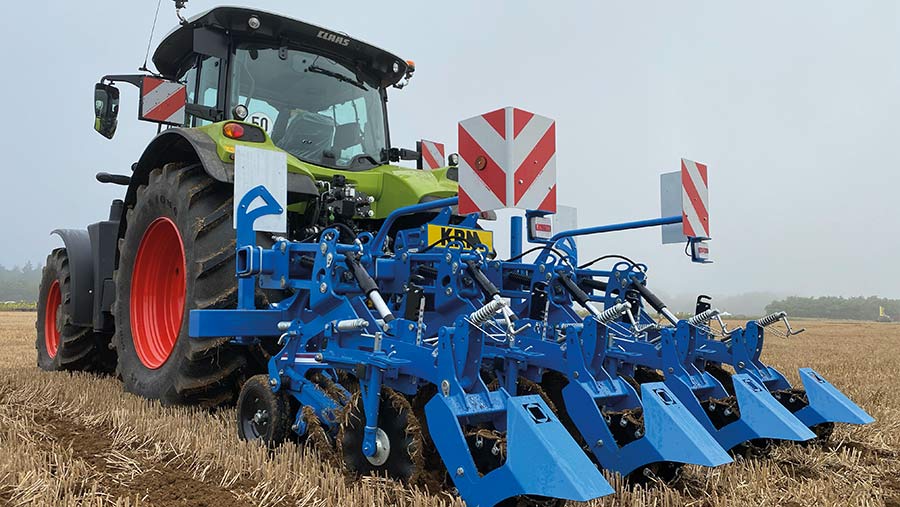 The Inro strip-till cultivator is one of several Carre implements now sold by Yorkshire-based KRM.

Demand for these machines is apparently on the rise, with more growers looking to cultivate only where necessary to reduce establishment costs, minimise disturbance and improve soil structure, while still loosening the rooting zone to encourage quick early growth.

KRM offers the Inro in widths from 3m to 6m and in both mounted and trailed form, so it can be adapted to suit most tractor powers and output demands.

It is possible to vary row spacings from 45cm to 85cm by sliding the spring-loaded cultivation elements along the main beam.

The position of these will depend on whether it will be used for maize land preparation or oilseed rape drilling – the latter requiring the addition of Carre’s 200-litre hopper.

Soil engaging components start with a pair of depth wheels on each element, which sandwich a straight cutting disc.

This is followed by trash-cleaning discs (if specced), and then by a deep-working, carbide-tipped leg that will operate down to 300mm.

The position of the wavy discs mounted either side of the leg can be adjusted to vary soil mixing and throw, and there is a choice of press wheels at the back. The model on show at Tillage Live was fitted with chain rollers, but a Guttler-style prism roller is also available where a heavier press is required. 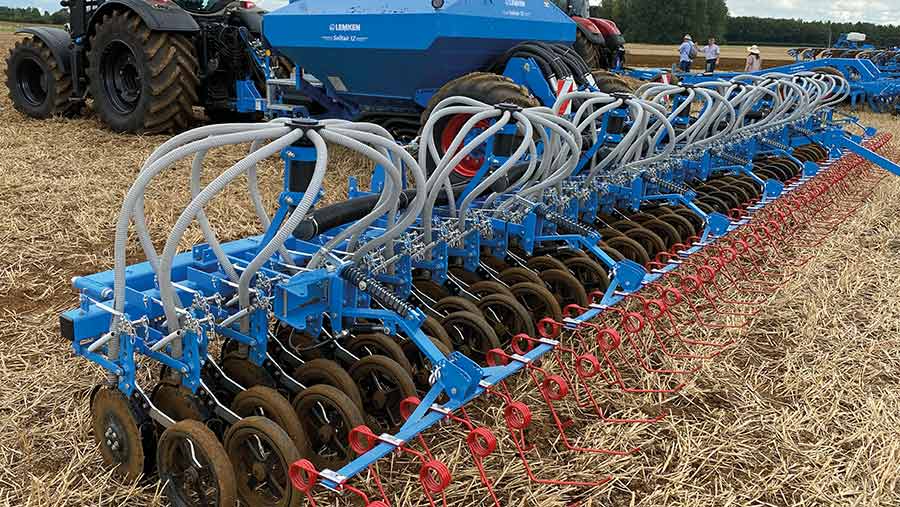 A seed-and-fert version of Lemken’s time-proven Solitair 12 made its UK debut at Tillage Live, in response to heightened demand for split hopper models.

Typically favoured north of the border, twin-product drills are now finding homes across the UK as more growers expand their spring-cropped acreages to counteract blackgrass pressures.

The Solitair 12 has a 5,600-litre capacity, split 60/40, with each compartment having its own metering system.

The products are piped out of opposite sides of the tanks before meeting and mixing ahead of the distribution heads – of which there are eight to provide section control in 1.5m blocks.

The mix of seed and fertiliser is applied through Lemken’s double-disc coulters mounted on parallelogram linkages.

There are no soil-mixing components on the drill, which minimises the risk of weed seeds emerging post drilling. Instead, most buyers tend to complete cultivations three or four weeks earlier to encourage the germination of undesirables that can then be sprayed off.

The other advantage of this arrangement is a low power requirement, with the model on show being towed – albeit on flat, pillow-soft ground – by a four-cylinder Valtra N175.

Control is via Lemken’s CCI terminal or, via Isobus, through the tractor’s touchscreen. List price is about £97,000 as standard (about £8,000 more than the single-hopper version), but there is the potential to spec up to £20,000 worth of options.

From January, owners will be able to couple the hopper and metering system to an Azurit 10 precision drill to apply fertiliser when maize drilling. 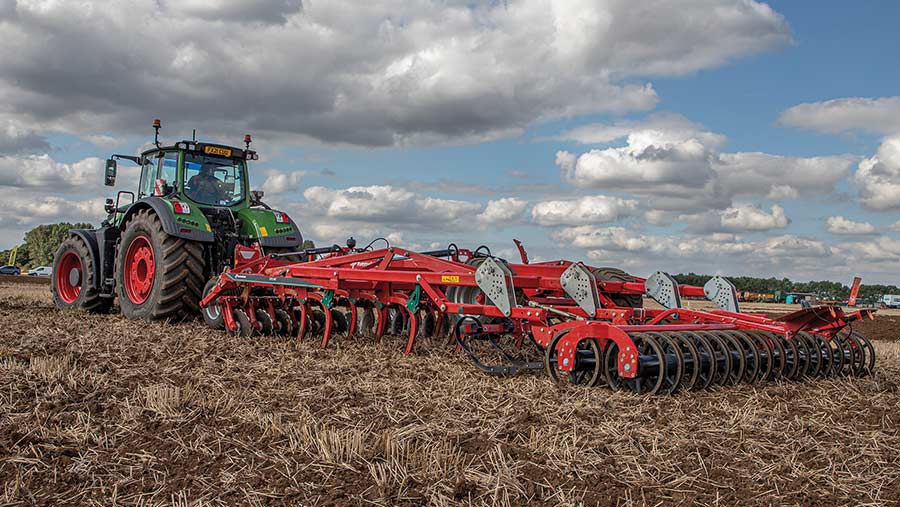 Unlike most combination cultivators, which have deeper-working tines at the front and disc assemblies in the middle, KV mounts the two components the other way around.

This means the 4m, 5m and 6m CTCs lead with a row of 520mm serrated mixing discs that help incorporate straw, chop any leftover crop laid across tramlines, and bury trash in the top couple of inches.

Behind that comes three rows of tines with 700kg-rated leaf spring protection. These will work down to 300mm and can be fitted with various points from 80mm to 320mm wide.

Because they use quick-fit knock-on points, some customers are choosing to use the 80mm points to work deeper when tearing up headlands and tramlines, before switching to the wider feet for the rest of the field.

The lower section of the tine has a shallow profile of 33deg, akin to a subsoiler, to lift the soil, while the top section sits at 73deg to produce a more aggressive mixing and throwing action.

Further back, hockey stick-style levelling tines tidy up (discs are an option) before a packer consolidates the ground.

The version on KV’s Tillage Live stand was fitted with an Actipress twin soil-on-soil press.

In standard mode, both front and back packer units apply the same pressure, but the front section can be raised in wet, sticky conditions to improve performance.