If controlled traffic farming is all about minimising the wheelings of machinery across the field then wider kit makes good sense. But until recently there’s been a limitation – cultivators and rolls don’t generally come much wider than 12m.

However, over the past five years or so the likes of He-Va, Dalbo and Cousins have come up with increasingly bigger rollers all topping out at around the 18m mark.

Then three years ago, almost simultaneously Dalbo and Essex firm J Brock and Sons broke on to the scene with monster machines with spans of 24m.

Keen CTF enthusiasts, Nottinghamshire farming business H Barton and Co was quick to jump on this latest development and opted for the first set of Brocks Double Lock rollers out of the workshop. 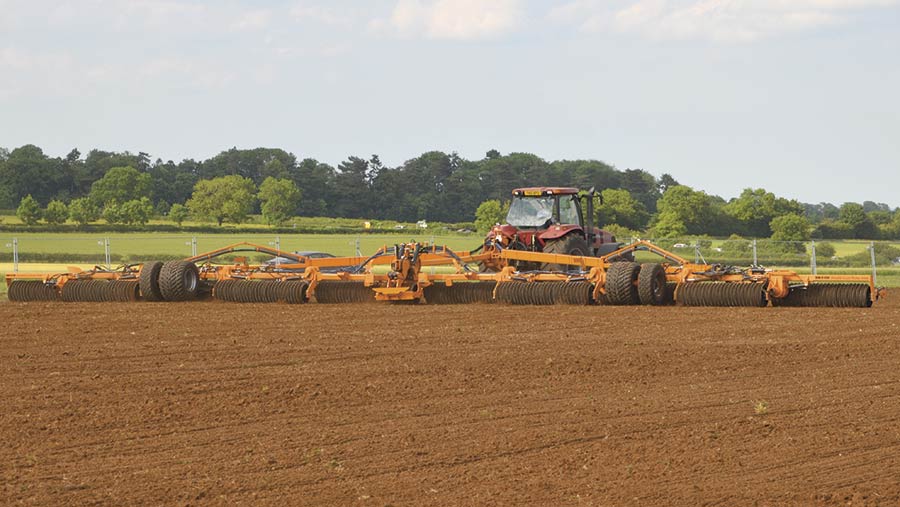 “But the one area where we were lagging behind was with the rolls.

“We’d noticed we were getting much better slug control and Avadex efficacy against blackgrass when we rolled twice but we just didn’t have the output to do our entire acreage.

“Going faster is counter-productive so wider was our only option. For a while the biggest on offer were 18m sets, which wouldn’t have made sense for 12m CTF.

“Then when we got wind that Brocks were developing 24m rolls we immediately put our name down for a set.”

It was a bold move buying an unproven piece of kit without seeing it in the flesh first.

Although Brocks had been working on the concept for a number of years, Barton’s set was the first going out to cover a serious acreage. Knowing that, the family were pragmatic about the potential for issues in what was essentially a prototype machine. 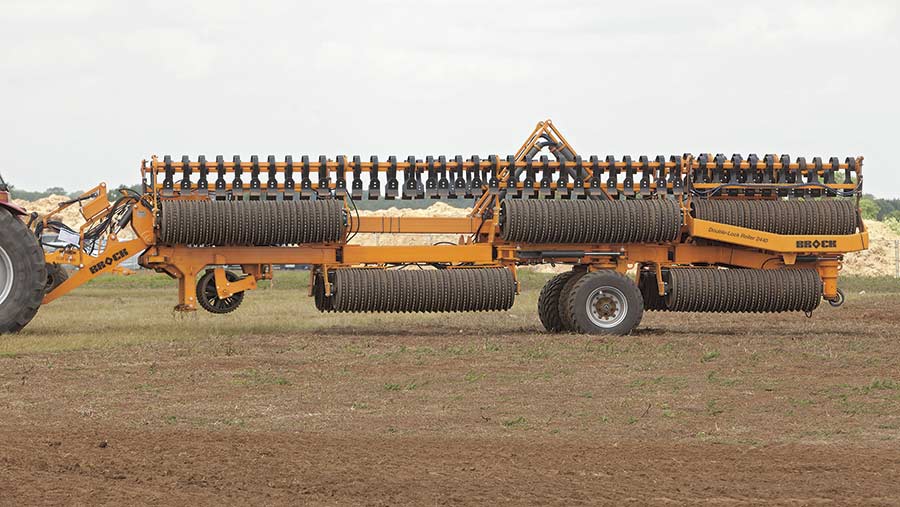 “We’d dealt with Brocks on numerous occasions before and the previous year had bought a 15-year-old Kongskilde boom spreader to apply Avadex,” says Mr Barton.

“We’d got chatting about grassweed problems and they mentioned they had the 24m rolls on the way. It might have seemed like a bit of a punt going for something we’d never seen but they’re such a good firm to deal with, I had complete confidence that we’d be looked after if any issues arose.”

The 11-gang rig is a complicated piece of kit, particularly when it comes to folding and unfolding.

To lift out of work the 22t machine initially rolls back on to its twin transport wheels. Once jacked up in the air, the left and right sections then fold rearwards.

Rather than relying solely on hydraulics to achieve all this, Brocks initially opted for a rack and pinion arrangement to pull the wings round into position.

However, pretty early on the Bartons realised this was an unnecessary complication, finding that by easing the tug tractor forwards or backwards the job was quicker and more straightforward.

As you might expect, the prime mover up front has to be a fairly hefty lump. Generally, the Double Lock rolls run with a Massey Ferguson 7726 in the yoke. Capable of pumping out a maximum of 255hp, power is rarely an issue with much of the business’ land being relatively flat.

However, when the rig is working on some more banked ground the MF’s 710mm wide rubber can start to scrabble and it’s the same story when conditions start to get a bit spongy. Because of the roller’s 22t bulk, the 600mm (24in) rings can begin to bog down, increasing rolling resistance and making traction an issue.

“Generally, the Massey is a good match for the rolls and it is grip rather than power that becomes an issue in sticky conditions. But in reality, we take the view that if we’re beginning to scrabble we probably shouldn’t be out there.

“That’s the other big benefit of having such a big set – we can achieve so much in a day that we can be more picky about when we get out there – if the ground isn’t ready we don’t have to force it.”

The other issue that has arisen when running on tacky soil is the sections running directly behind the tractor wheels tend to pick up and carry dirt.

The Bartons came up with their own straightforward solution to the problem – they simply removed the problem rings and replaced them with sections of steel tube to act as spacers. That way, the unrolled strips are effectively consolidated by the tyres but when things get sticky the ground disturbed by the lugs doesn’t cause an issue.

“Our only ongoing issue is with the transport wheels. Because they’re required to carry so much weight, when folding and unfolding in the damp they tend to dig a hole as they screw round.”

Brocks have now addressed that on new models by doubling up the wheels and making them pivot during unfolding.

If you’re wondering how much a 24m set of Double Lock rollers will set you back, they appear in the Brocks price list for £69,000.

“They were a big investment but the rolls do a fantastic job, much of that is because we’re travelling slower at 5-8kph,” concludes Mr Barton.

“But also the combination of plain and breaker rings means they shed clay and smash clods, leaving an even surface for maximum Avadex efficacy. Their sheer weight makes for a pretty slug-hostile seed-bed, particularly when we’ve rolled twice – they’re really the most underestimated tillage tool we’ve got.” 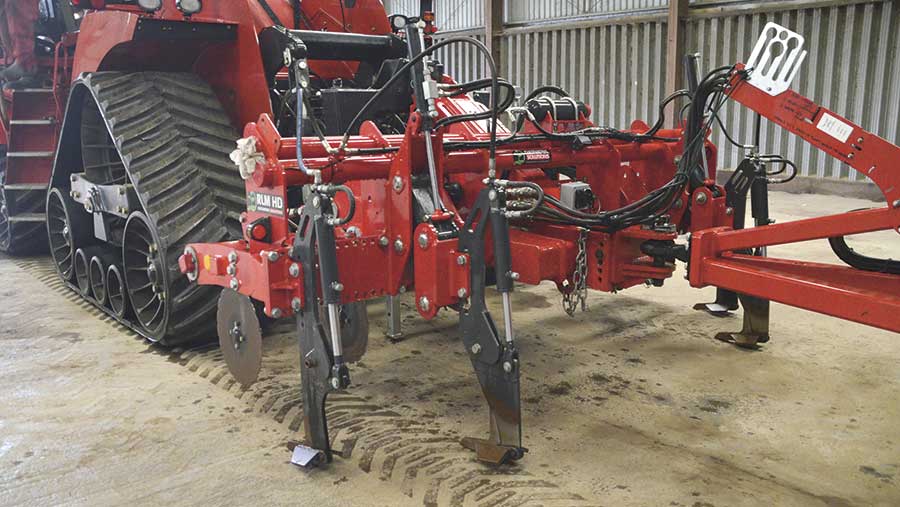 Up until four years ago, the Bartons employed a maxi-tillage approach using a mix of deep-working disc-tine-press combinations, cultivator presses and various other heavy tillage tools in partnership with a 8m Horsch Sprinter drill.

But it had become apparent they were moving way more ground than necessary, chewing through excessive wearing metal, burning tanker loads of unnecessary diesel and ultimately damaging the soil structure. So, in 2013, they switched to a true min-till approach only ever working the top 7cm-10cm (3-4in).

It was out with the 7m Simba SL and 8m Vaderstad Carrier and in with a 12m Lemken Solitair drill and accompanying 12m Horsch Joker, Phantom and FG shallow cultivators, all set-up to work for a controlled traffic system.

“By only working the top three inches and by applying muck to between a third and a quarter of the farm each year, in just three seasons we’ve seen a massive increase in worm populations,” says Mr Barton.

“They’ve done a much better job of structuring the soil than we could ever do with a subsoiler – it’s a complete honeycomb of burrows so it drains in the wet but like a sponge it holds on to the moisture.

“Because our kit is so much wider there are fewer wheelings to worry about. We still believe that the compaction caused by these big machines still needs dealing with so we had a sub-soiler toolbar made up by Cultivating Solutions to go behind our biggest Quadtrac.”

That way, when the 620hp Case IH tracklayer is pulling any one of the 12m cultivators or drills it can loosen any ground run down during previous passes.

For the intermediate wheelings between tramlines two pairs of winged sub-soiler tines are pulled through at a depth of 8-10in depth.

Then when the tractor gets on to one of the permanent sprayer/spreader runs the inner two are lifted out of work, leaving the outer ones to pull out any compaction left by the wider combine and chaser bin wheelings (the Horsch bin has a telescopic axle so that it runs in the same tyre-treads as the Claas Lexion 780TT).

Never ones to stand still, the Bartons are constantly looking at ways to further refine the system. Currently, it’s the drill that’s coming under the spotlight.

“The Solitair had served us well for the transition to true min-till but the double-disc coulters have their limitations. When it is wet or cloddy or very dry they can’t impose enough downforce so they struggle to bury seed at an even depth – we have to slow right down to stop them riding out.”

“Because of that we’re now looking at moving back to a tine-coultered drill. We’ve had a Horsch Sprinter before and know its strengths and weaknesses. Our big concern is surface disturbance with a tine drill. The standard Duett coulters move way too much soil so we’re currently weighing up the options for something less disruptive.

“We like the look of the Canadian Dutch Openers. They still place seed in a band but don’t create that boiling effect on top. Being a tine, they’ll pull themselves into the ground and shouldn’t ride out, hopefully leading to better seed placement.

They’re also able to put fertiliser down the spout and there are versions to suit virtually any tine drill.”

Barton and Co, near Gainsborough, Nottinghamshire