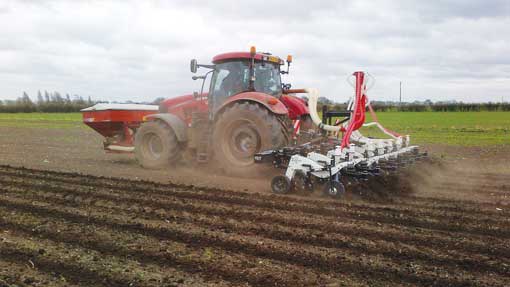 Switching to strip-tillage offers farmers the chance to trim down their horsepower needs and potentially save tankloads of fuel. Oliver Mark meets one farmer who has recently made the change

Most of the big farm bills come from crop establishment, so any system that cuts them down is worth trying.

Strip-tillage cultivators, not to be confused with strip-till cereal drills, are designed to loosen the root zone of the area to be drilled and leave the rows in between untouched. The result is lower horsepower requirements and a better soil structure across the field.

If you do decide to go down that particular route then Sly Agri’s Stripcat is probably the Rolls-Royce of the strip-till world. The company has been building the machines for several years and now has almost 200 strip-tillers running across Europe.

One farmer who liked the look of the Stripcat was Willie Mackintosh, who grows 800ha of maize and forage rye for an on-site anaerobic digestion plant at his farm near Hatfield Woodhouse, Doncaster.

Spread across predominantly sandy soils, the farm switched from a combinable-crop-based rotation when the AD plant was built in July 2012.

That meant ditching the combine and replacing it with a Krone BigX 700 forager capable of producing the fine 8-10mm chop demanded by the AD plant. The BigX currently chomps through 36,000t of crop each year to keep the digester fed.

The second part of the machinery jigsaw came when looking for a new cultivation system to suit the large quantities of maize and rye grown on the farm.

“We were after something that could simplify and speed up our crop establishment process,” says Mr Mackintosh.

“We were already using strip-tillage in its most basic form – an oilseed rape seeder on the back of a subsoiler – so choosing a dedicated strip-tillage cultivator seemed like the obvious choice.”

Mr Mackintosh cast his eye over several different types of specialist strip-till kit at the Agritechnica show two and a half years ago. Machines from Duro-France and Vogelsang were on the options list, alongside the Stripcat from Sly Agri.

But it was the last of these that ended up on the farm – the build quality and location of the firm at Spalding was too much to resist.

“The first thing we noticed was the attention to detail and build quality of the machine,” he says.

“There are nylon pads to protect the metalwork where the wings fold down and all the joints are nicely bushed. It’s also quick and easy to make adjustments in the field.”

Since the 6m, eight-row machine arrived on farm in 2012 Mr Mackintosh has had time to fine-tune the cultivation plan and has now settled on a pretty simple-to-follow system.

The Stripcat is pulled through the fields three weeks prior to drilling and, at the same time, applies a base dressing of granular fertiliser from a 1,600-litre, front-mounted Accord hopper.

The farm’s 8m Kverneland Optima maize drill does the drilling afterwards and deals comfortably with the Stripcat’s seedbed.

A leading wavy, trash-cutting disc opens up a slot and is flanked by depth wheels, which help to pin down residues and assist the disc to slice through the material.

Following that is a pair of fiercely angled, finger-type discs. These are designed to clear stubble trash to leave a clean strip for the shank.

The narrow, low-disturbance legs can be adjusted down to 300mm through a hole-and-pin arrangement and can be protected either by hydraulic auto-reset or a traditional shearbolt. Each shank has a 410mm disc either side to limit soil throw, keep material within the strip and create a ridge of loose soil.

Fertiliser falls into the slot behind the shank. Air actuators control the ground pressure of the front depth wheels and the two cage consolidation wheels at the back from zero to 600kg.

Air provision is no problem on the farm – the tractors have on-board compressors – but you can fill up the cultivator’s framework tanks before work if you’re running older tractors.

Horsepower is provided by an autosteer-ready Case Puma 215. Guidance is vital for the strip-till system, and the improved accuracy of the RTK also helps lower the AD plant’s carbon footprint.

This year it’s set to cover about 200ha, and workrates usually reach about 30ha/day. Mr Mackintosh also plans to switch the row widths to 50cm in the summer for oilseed rape establishment to get the most out of the Stripcat.

“It can also work on recently harvested fields, provided they haven’t been wrecked by heavy machinery, and this year we’ve used it on some early-cleared beet fields.”

“The heavier the soil the drier it needs to be, but it won’t run very well in wet conditions at all,” he says.

The 40ha of sugar beet land is also min-tilled where possible to minimise wind and water erosion. So far the farm has seen no impact on yields and the change in tillage system has also brought about an increase in earthworm populations.

Twin Diamond Industries developed the original Stripcat in the USA, before it sold the rights to the rest-of-the-world market to Lincolnshire firm Sly Agri.

Sly’s European factory in Bergerac, south-west France, has built more than 200 machines for the European and African markets. Most end up in France and Germany where strip-tillage is pretty popular, while the UK market has been slower to take off.

Part of the reason for that is the hazy marketing distinction between strict strip-till systems and the strip-till cereal drills built by the likes of Claydon, Mzuri and Sumo.

Sly does plan to join the drill market in the next couple of years, too, although first in the pipeline are metering controls for fertiliser application. A 9m Stripcat will also be shown on the Sly stand at this summer’s Cereals event.