A farm-built broadcaster costing less than £3,000 has given James Hopkinson the opportunity introduce cover cropping as part of a “regenerative” approach to the arable enterprises he manages.

The tractor-mounted boom broadcaster, knocked up in the farm workshop by the Arable Ventures team farming in the productive Vale of Strathmore in Angus, is based on a dilapidated sprayer sourced from a local dealer’s yard.

“It’s not a very pretty machine,” he acknowledges. “But it’s given us good distribution of seed across the 18m working width and an opportunity to try out broadcast cover cropping at relatively low cost.

“We’ve been playing around for a couple of years with small amounts and different mixtures and I’m now convinced cover crops have got to be an integral part of our system.

“The challenge up here is to get them in, established and viable to produce the root mass we want in order to benefit from the improved drainage and soil friability, and to carry nutrients through to the spring.” 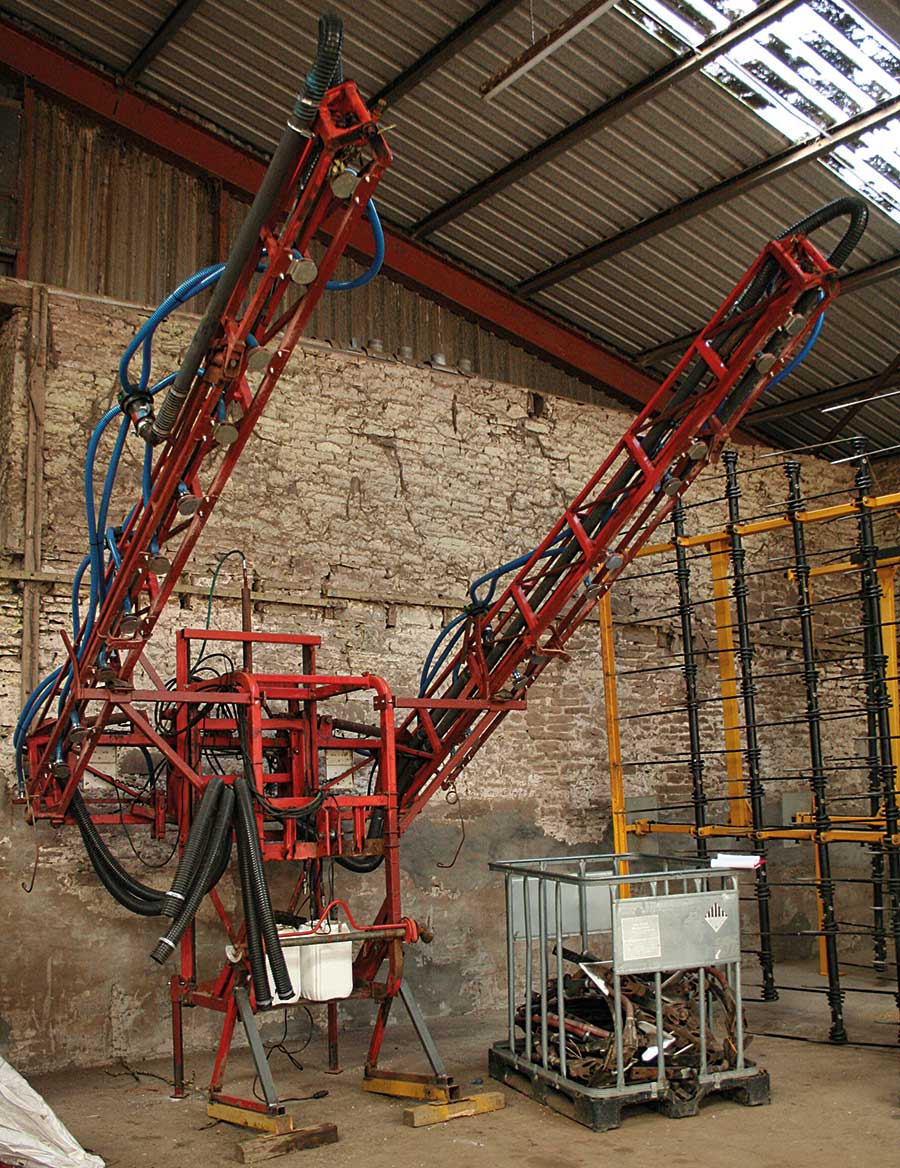 Mr Hopkinson’s Arable Ventures operation was set up to provide machinery and labour across 1,100ha as a joint approach between two family-owned farming businesses – Lindertis Farms and Walker Munro Farms.

He also manages the latter while providing agronomy services to Lindertis and a couple of other farming estates through another business, the East Lothian-based Cloud Farming operation.

Mr Hopkinson is no stranger to experimentation, not least in adopting minimum tillage and direct-drilling techniques in an area where the plough and power-harrow combination drill still dominate arable crop establishment.

This year, spring wheat is being tried in place of spring barley as he does not like the current dynamics of the malting barley market.

The budget for this crop is based on a cautious 6t/ha yield at a feed wheat price, but Mr Hopkinson is keeping his fingers crossed that the stars will align to earn a milling premium as a bonus. 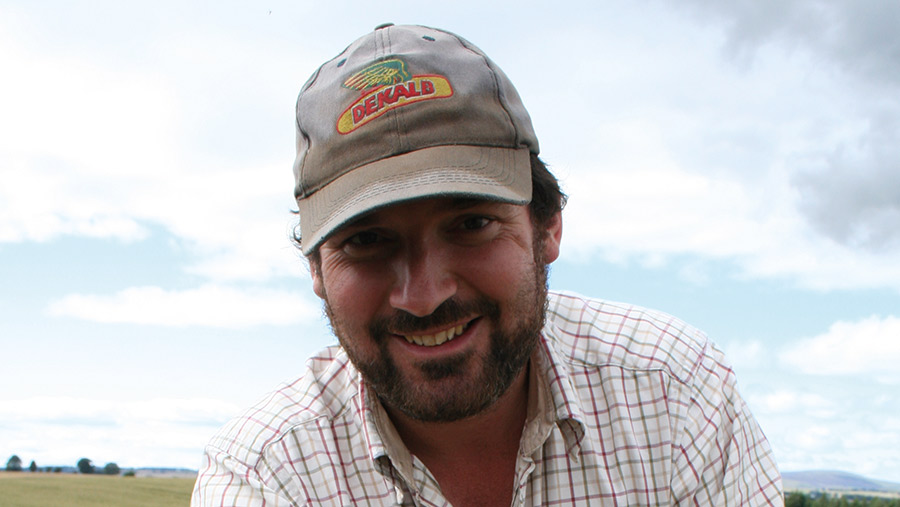 “Spring wheat just doesn’t tiller so you need a higher seed rate that bumps up the costs,” he points out. “Being able to home-save seed for next year will improve the economics.”

Establishment expenses were kept in check by sowing into soils that range from light sand to relatively heavy clay with a high silt content. He works directly into stubbles with a 4m John Deere 750A disc direct-drill or into a lightly cultivated tilth with a 6m Claydon Hybrid tine seeder, the latter equipped with “A” share band-sowing coulters.

Preparations for the crop that will follow – direct-drilled spring oats – got under way at the end of July, when a proprietary cover crop mix was broadcast.

The combination of vetch, oilseed radish, crimson clover and buckwheat applied 27 July started to chit four days later thanks to the presence of plenty of moisture, and by mid-August was displaying welcome initial growth with only slight evidence of slug damage.

“I’m really pleased with what we’ve seen so far and if the plants grow a foot tall and reasonably dense they should compete with any weed growth,” says Mr Hopkinson.

“The cover crop should then go on to give us its recognised benefits, such as taking up and carrying over nutrients, putting carbon back into the soil and giving soil microbes that important lifeline when there are no cash crops in the ground with the exchange of root exudates for plant nutrition.”

Broadcasting was chosen to give the cover crop as much time as possible to become established, considering the short window between harvesting and autumn days getting shorter and colder from mid-September.

And also because it can be done pre-harvest when things are a bit quieter, rather than in the more manic post-harvest period.

A 3,000-litre Lemken front-mounted tank was the logical choice to carry the cover crop mix as it is already used to supply fertiliser to the two drills and a 3m He-Va Combi Disc subsoiler/disc cultivator used for sowing oilseed rape.

The tank is also used to deliver seed to both drills, the Combi Disc and a Claydon Straw Harrow for establishing cash and catch crops, and cover crops that are grazed with sheep if the opportunity arises.

The first job for Arable Ventures machinery operators Graeme Bushnell and Peter Ray in creating the cover crop broadcaster was to strip off the tank and all spraying-related equipment, apart from the control box used to lift, lower, tilt and fold the boom.

A triangular cross-section frame supports the broadcaster once off the tractor and a few well-placed heavy hammer blows to the back frame had the boom lifting and lowering smoothly. However, before a good bit of head scratching was needed to decide upon a layout for seed distribution. 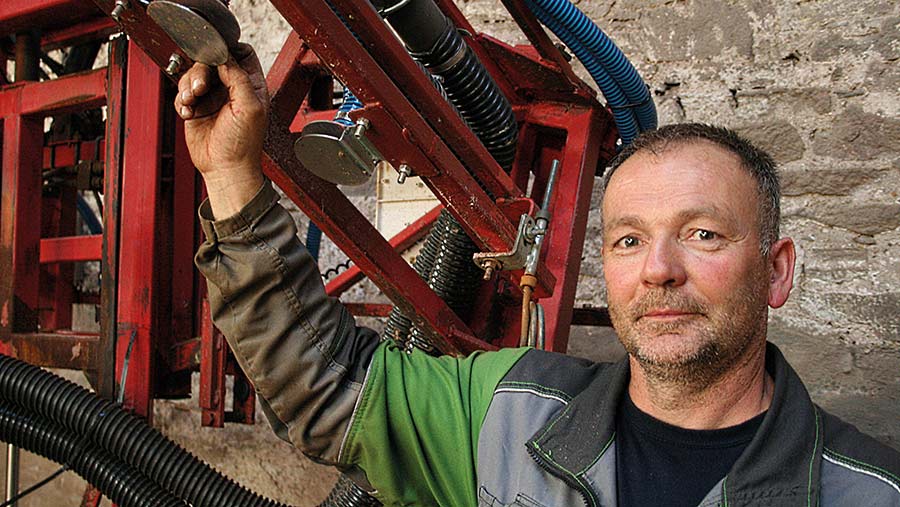 “We learned a bit about airflow and back-pressure from past experience putting distribution systems on the seed drills, straw rake and Combi Disc so considered nothing else but to stick with Lemken’s four-pipe delivery and distribution head set-up,” Mr Bushnell recalls.

“The main thing was to work out routes for the pipework to make sure they didn’t get pinched when the boom was unfolded and folded again.”

The four Lemken compact distribution heads are fed by a combination of 90mm-diameter rigid plastic pipe fixed along the boom using U-bolts and lengths of flexible tube of the same diameter at the various pivot points.

Each of the heads then shares seed among six lengths of 30mm flexible pipe that deliver it to 24 stainless-steel deflector plates positioned along the boom.

Sourced from Spaldings, the spreading plates are angled to give a fan-shaped distribution pattern and came ready drilled for bolting to brackets that, in this case, were cut from scrap metal plate and welded to the boom.

“Overall working width is 18m, which fits our 36m tramline system but means we had to run between as well as on the tramlines,” says Mr Hopkinson.

“With row crop wheels fitted that meant we trampled about 2% of the crop by my calculations, but I felt this was worth it to experiment with broadcasting without spending too much time and money on the broadcaster.