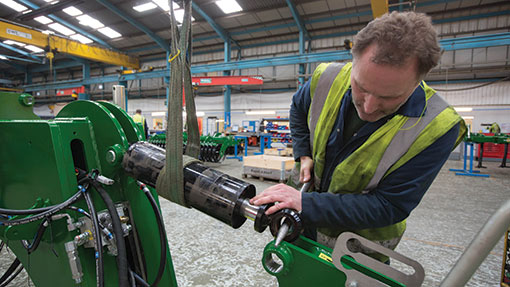 Ask a farmer to name some British cultivator makers and the chances are that, within the first three, he’ll have mentioned Simba.

It’s no surprise, really; the company has been selling into UK and European markets with a good deal of success for almost four decades.

Although it didn’t have a drill of its own, a tie-up with German manufacturer Horsch gave it access to the increasingly important drill market. In fact, with many years of one-pass, non-inversion experience in East Anglian soils, it was in a good position to push up sales in European markets.

However, it turned out that Simba and Horsch had different plans for their businesses and in 1999 the two companies went their separate ways. Which left Simba in urgent need of a drill to maintain its expansion into Europe.

Meanwhile, 4,500 miles away, a company that few UK farmers had heard of was looking to expand its operations. Called Great Plains, it was based in Kansas, bang in the centre of the US, and made huge numbers of drills and cultivators, mainly for the North American market.

But it, too, was pushing into Eastern Europe (particularly Ukraine, Russia and Bulgaria) and had its sights on the western European market. So the parallels between the two firms were obvious and the news in 2010 that Great Plains was buying Simba looked entirely logical in business terms.

Four years on, staff numbers have gone from 89 to 130 and almost all those new jobs are manufacturing ones. “We had virtually shut down the manufacturing and had become an assembly/shotblasting and painting company,” says managing director Colin Adams. “When Great Plains’ boss Roy Applequist came over he said, ‘Our plan is to get you manufacturing again’.”

“Of course, you can’t make everything in-house,” points out sales manager David Holmes. “It wouldn’t make sense to buy in lots of £200,000 presses when we have a machine shop just eight miles away. But our policy is now to make things in house if we possibly can – for instance we’ve just installed a £130,000 bar CNC lathe.”

So how has being owned by a big US company affected the type of machines Simba sells? In many ways it hasn’t, says Mr Adams, but the market has changed. For the past seven or eight years it’s 3m models to go behind 150-160hp tractors that are in most demand. Now smaller farmers want those benefits too.

No surprise, then, that the 3m DTX cultivator is the company’s biggest-selling model, followed by the 3m Xpress and ST bar models and the one-pass SLD.

“People want more flexibility these days,” says David Holmes. “They want a machine that will work in all soil types, in all weathers and in all establishment systems and they want lower costs too.” 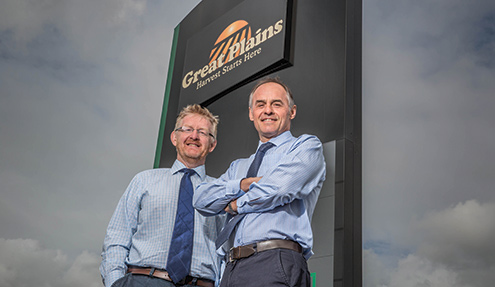 Getting the new Centurion drill into production hasn’t been a quick process, admit Colin Adams and David Holmes (pictured above). It was shown in 2012 and the first one sold in 2013, but it’s only now getting into full production. Autumn 2012, with its appalling weather, wasn’t exactly a good time to be demoing a new drill either.

Some 50 have been sold, split between western European markets and east European ones such as Romania, Russia, Estonia and Ukraine.

The pace of new model introductions is speeding up. The 6m grain-only model will soon be joined by 4m and grain/fert options next year, with deliveries in 2016. Further ahead, expect precision placement systems and more flexibility, in fact anything from zero-till to a plough-based system.

How is Great Plains’ own expertise in the US helping its UK arm? “As well as their production skills, they have a lot of expertise in fertiliser placement, both liquid and dry,” says Colin Adams. “Equally we have been able to help them deal with the much stricter road laws in western Europe.”

As well as seed drills, the new 3m Yield Pro precision planter (a joint project between the UK and US) is on test in Europe. There’s also scope to re-engineer some of the US products to make them suitable for Europe, says Mr Adams.

With 200 pieces of equipment in the Great Plains catalogue, they admit they will only be able to introduce a few models at a time. But the company is confident that the Great Plains name will soon be as well-known in the UK as Simba used to be.