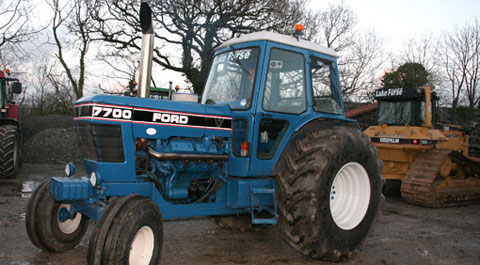 If the burble of a throaty V8 engine puts a smile on your face, Luke Furse’s modified Ford 7700 will have you grinning from ear to ear.

Twin gleaming stainless steel manifolds and chunky rear tyres are the first signals that there might be more to this tractor than meets the eye.

But turn the key, fire up the 200hp Perkins V8 diesel crammed under the bonnet and it becomes crystal clear that this machine is one of a kind.

At tick-over the engine rumble makes buildings shudder, but if you put your foot down the note erupting from the CAT D6 exhaust makes Brian Blessed sound positively squeaky.

So where did this slightly peculiar marriage between an ageing Ford tractor and huge V8 come from?

The donor Ford 7700 had been an integral part of Luke Furse’s contracting business in Devon and after 30 years of hard graft, the engine was shot, the cab was rotten and it was destined to live out its days in the nettles.

But as the Ford was coming to the end of its useful life the firm’s Dominator 100 combine was also threshing its last. “The engine basically wore out the combine,” says Luke. “We used it for combine racing and then it really had come to the end of its life.”

Instead of packing both bits of kit off to the knacker’s yard, he decided to clock up some workshop hours and bring the two together.

Stage one was to strip the tractor down, remove the original 4-pot engine and sort the shabby cab. In the end he picked the best bits from two slightly suspect cabins and after many hours with the mig welder, one sound unit was created.

Hauling the Perkins 605 block out of the combine body and offering it up to the tractor was the next task. A particularly impressive piece of engineering was required here as the original engine was the only thing holding the tractor’s front and back end together.

Building a ladder chassis to connect the rear end to the front tombstone weight was the only solution. Luke started by building a template capable of housing the new block and holding the tractor together.

Once happy with the setup, he fabricated the frame out of thick steel plate, bolted it to both sets of loader brakets at the rear and the tombstone weight at the front. The Claas engine was nestled neatly in the middle and attached using its original mountings.

Luckily, the V8’s fly wheel was only half-an-inch larger than the original so it only needed a light grinding before it slotted comfortably into the bell housing. The 7700’s original clutch and transmission were used and have so far handled the extra power with ease, even when used in pulling competitions.

Keeping the tractor’s original appearance was one of Luke’s biggest hurdles and required a few tricky under-bonnet alterations.

The first problem was that the V8’s radiator was far too big for the bonnet. Rather than altering the panels, Luke did a few sums and decided the original Ford unit could be modified to fit. Two new outlets were brazed into the top of the tank and the fan was pushed forward by 7 inches.

Because the V8 ran the fan significantly faster than the original engine, Luke was satisfied that the smaller cooling plant would be man enough to keep engine temperature under control.

Next, the power steering pump was relocated low down and drive was taken off the bottom pulley via a drive coupling nabbed from a Vicon Vari Spreader.

Wrapping the original tin work around the bigger block was the next challenge and required a considerable amount of re-modeling. This included extending all panels by 40mm, making a wider opening for the exhaust and adding in an 11-inch section of extra bonnet from a TW25.

All this was done without altering the original shape and you need to look pretty closely to spot the modifications.

For the exhaust, Luke dug out a big-bore stainless steel pipe he had been storing for years just in case he had an opportunity to use it. “We used to have a CAT D4 crawler and when I ordered a new exhaust for it this stainless steel D6 pipe turned up instead,” he says. “I’d never seen a stainless steel one before so I thought I’d hang onto it.”

A local firm constructed custom stainless steel manifolds to connect the stack to the engine. At first there was no silencer, but the straight through pipe was a bit too vocal, says Luke. “I thought it would be a bit unfair on the neighbours, so we rolled up some chicken wire, stuffed it up the pipe, and now it is just about perfect.”

Larger rear wheels were taken from a John Deere forager and had new centres welded and balanced before they could be fitted to the 7700’s back axle. The original front wheels were saved, but the tyres were upped by two sizes to keep it in proportion.

The spool valves and pick-up hitch were also tidied up and a feature air cleaner was fabricated out of parts from a Seddon Atkinson lorry, a milking machine and a slurry tanker, topped off with an American chrome dragster filter.

In its first year after restoration the 7700 V8 clocked up 300 hours on a 30ft rake and put in an impressive performance at a local tractor pull, says Luke. “It has got some serious power and will pull an 11t silage trailer up our steepest bank in top gear.”

The 7700 V8 has been retired from active duty and is now used as a showpiece along with Luke’s County 1454 and one of only two Ford 9600s still in existence. 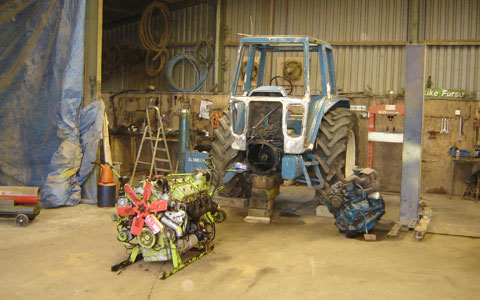